So I did a search and came up with zilch...but I didn’t go all the way down the rabbit hole. I apologize if this has been beaten to death (and for the three cliche/idioms I just used) but I wonder how many of you have dropped a knife with bolsters and felt the scales have been saved by the bolster taking the brunt of the impact? Maybe a silly question but I gotta ask. I have dropped knives and have had a shield or two scramble across the floor as a result but do bolsters protect delicate covers - mammoth/bone etc?

I think it all depends on how it lands. I saw a recent mammoth and jigged bone that were both damaged in drops. It didn’t seem like the bolsters helped in either case.

I’d say the bolsters’ main job is to provide rigidity and strength to the pivot and would obviously take the brunt of the impact if hitting first, but outside of that I don’t think the scales would be anymore protected from impact than if the knife was a shadow pattern.

If the bolsters and liner are integral one piece it could afford some protection if dropped on the end but if it lands on the side or exposed corners top and bottom, that wouldn’t do much good.
I like the looks of stone, mammoth and exotic materials but for using/work knives I prefer stabilized materials that are less vulnerable to drops and hits and other rough stuff.

I dropped my Amber jigged Texas Jack on the sidewalk a couple weeks ago and it hit bolster first just as I knew it would, it might have hit differently and damaged a scale were the bolsters not there so in this instance I'd say the bolster did protect it.
This is a chunk of metal on the end of the frame, especially with knives like the Buck 110 that weight out there makes the knife more likely to land bolster first.
A

I doubt they protect the scales. They just bolster the construction.

The end cap tho, that may be a different story

Of course they offer protection. A few months after I received my KHnutbuster I dropped it, pivot end, onto asphalt. Being a shadow pattern it's a light knife. That didn't spare it from suffering damage to the bone covers. After I recovered from my shock I took a few moments to examine my knife and found several chips in the covers.

I've dropped several spring knives over the years. Most of them had bolsters, and if they did, they were none the worse for wear after I dropped them. Just a ding here and there that ends up being indistinguishable from the scratches and scars an oft-carried knife picks up over time. The KHnutbuster received the worst of it, and I attribute the damage to the lack of bolsters.

The more metal the knife has, the better protected it is from drops.

This is great info. I am ordering a custom soon and am going to have double bolsters for sure as the handle material will be delicate in terms of dropping. Thanks bladeforums.
Last edited: Jan 2, 2021

Some custom makers will purposely make the scales proud of the bolsters. I know both the following makers so will contact and ask them if there's a specific reason.

These two slipjoints from Geoff Hague, the scale material is just under 1mm proud on both.

(middle one is fixed blade)

Forgive me showing a liner-lock..........bit simply to illustrate this one too where the scale material is very proud (Des Horn) 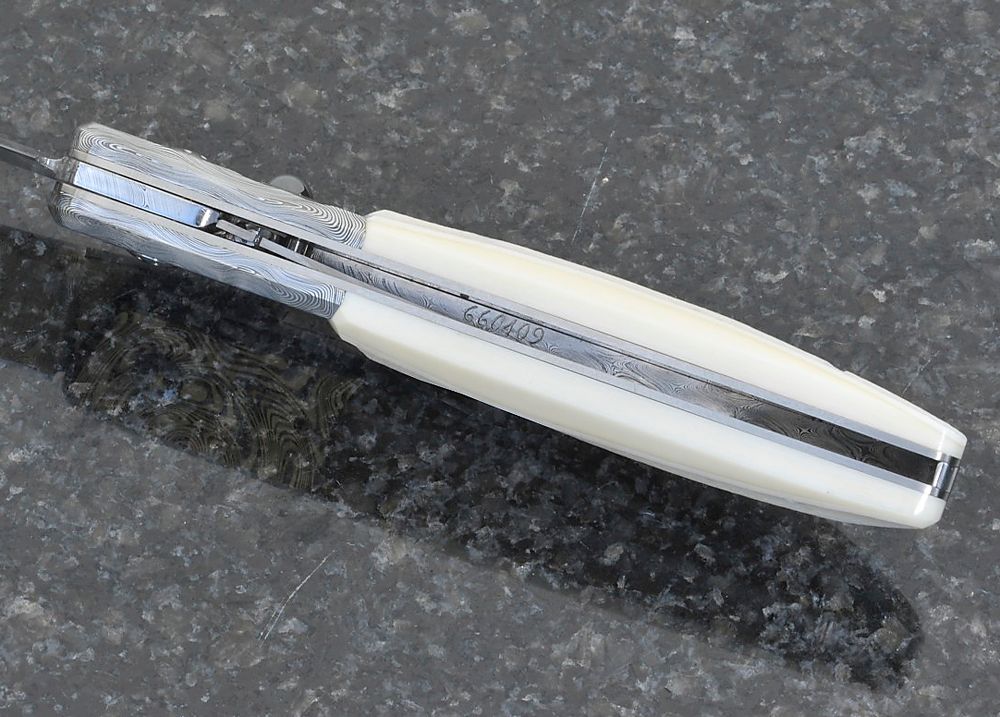 Question:
Presuming a true zero bolster and cover gap, wouldn't the impact on the end of a bolster be transferred to the cover(s)?

That’s what I am thinking but maybe better than bareheaded.

afishhunter said:
Question:
Presuming a true zero bolster and cover gap, wouldn't the impact on the end of a bolster be transferred to the cover(s)?
Click to expand...

Some perhaps, but not the full force of the impact. If the bolster ends up with a ding, then you know that the bolster itself absorbed some of it.

Chui said:
Some custom makers will purposely make the scales proud of the bolsters. I know both the following makers so will contact and ask them if there's a specific reason.
Click to expand...

Hey Paul, they call that an “heirloom” fit. It allows the materials to naturally expand and contract without showing a gap, or being noticeably proud or shallow of the bolster like it would if they were made perfectly flush. It also gives those precious handle materials a little more meat to prevent cracking.
B

I support this site with my MIND

I dropped a Sunfish Forge trapper on its bolster-less end on concrete and it chipped and cracked. IVe done the same with an SM English Jack with a bolstered end and it got a scratch, but no chip or cracked bone. Bolsters on the end protect the covers...it's kind of obvious

I dropped my Case Bose Premium stockman and it did land on the bolster and beat it up pretty bad and slightly backed out the pivot pin. The cover took zero damage.

sXePhenomenal said:
I dropped my Case Bose Premium stockman and it did land on the bolster and beat it up pretty bad and slightly backed out the pivot pin. The cover took zero damage.
Click to expand...

sXe,
What cover material was the stockman out of curiosity?

Bolsters and end caps offer more protection...
But don't overlook the beauty of a barehead.
To me, it would depend on the style of knife.
I don't think a swayback looks good with end caps.
But I think a serpentine looks weird without them.

huntnfishin said:
sXe,
What cover material was the stockman out of curiosity?
Click to expand...