I have a Camillus K-Bar style knife, the only Mark's on it are "U.S." over "Camillus N.Y." there are no other markings on the knife or the sheath.

I will post pics as soon as I host them somewhere.

Thanks for any help
G 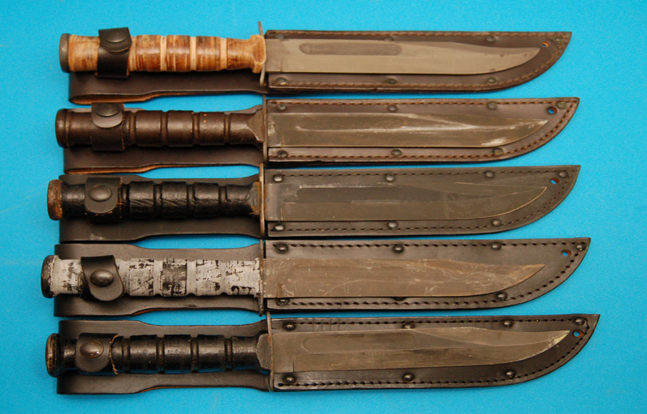 Military auctioned-off knives offer a hidden surprise in every box!

Military auctioned-off knives offer a hidden surprise in every box!

Is this an issued knife? It's not marked K-Bar. Any idea on what the model or name is of the knife?
Thanks.

I need to find a place to host pics, apparently
G

there are/were a couple of manufacturers
(past/present) which fulfilled knife contracts for the u.s. government.
all such us government issued (usgi)
knives will bear a stamped "U.S." mark.
and much like Ka-bar (union cutlery then) ,camillus was a pioneering ww2 contractor for the USMC and USN mk 2 knife.
after the war this knife pattern was
no longer exclusively USMC or USN service issue
its a mouthful of a name
Knife, Combat, Sheathed Specification MIL-K-20277
however "kbar/k-bar" (note spelling) is the accepted generic term to describe this knife pattern no matter the stamping marks present.
however many tend to mix up kbar/k-bar
the generic term with "ka-bar" the brand name. so its probably safer to call em "marine combat knife"
but current ka-bar is termed as the f/u (fighting utility) knife.. though many would readily describe them as the "ka-bar usmc knife".
hopefull the real experts who specialize in the known (and at times obscure ) history of this knife pattern would turn up here someday to fill in the blanks...
You must log in or register to reply here.
Share:
Facebook Twitter Reddit Pinterest Tumblr WhatsApp Email Share Link
Top
Change Ad Consent Do not sell my data