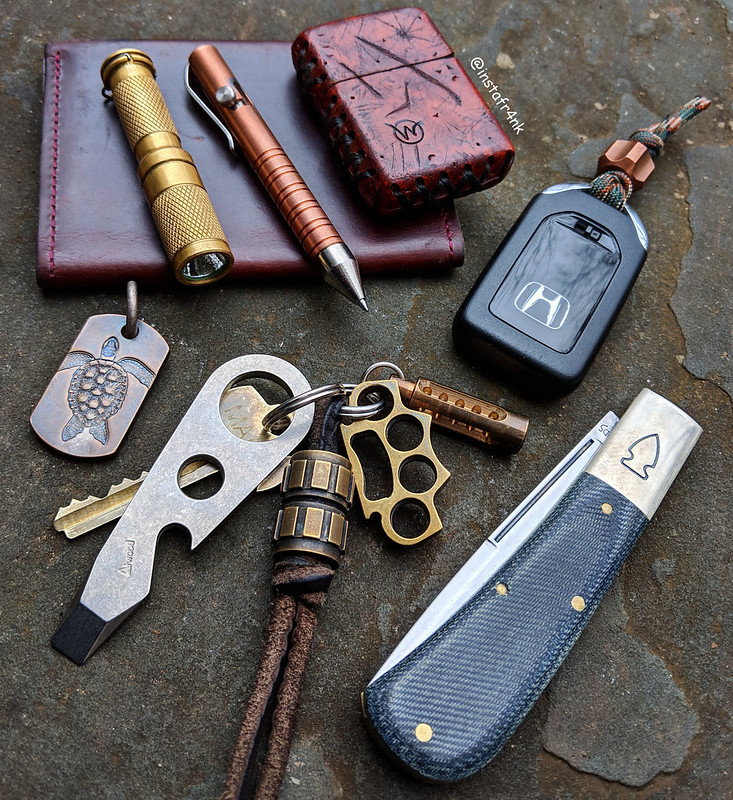 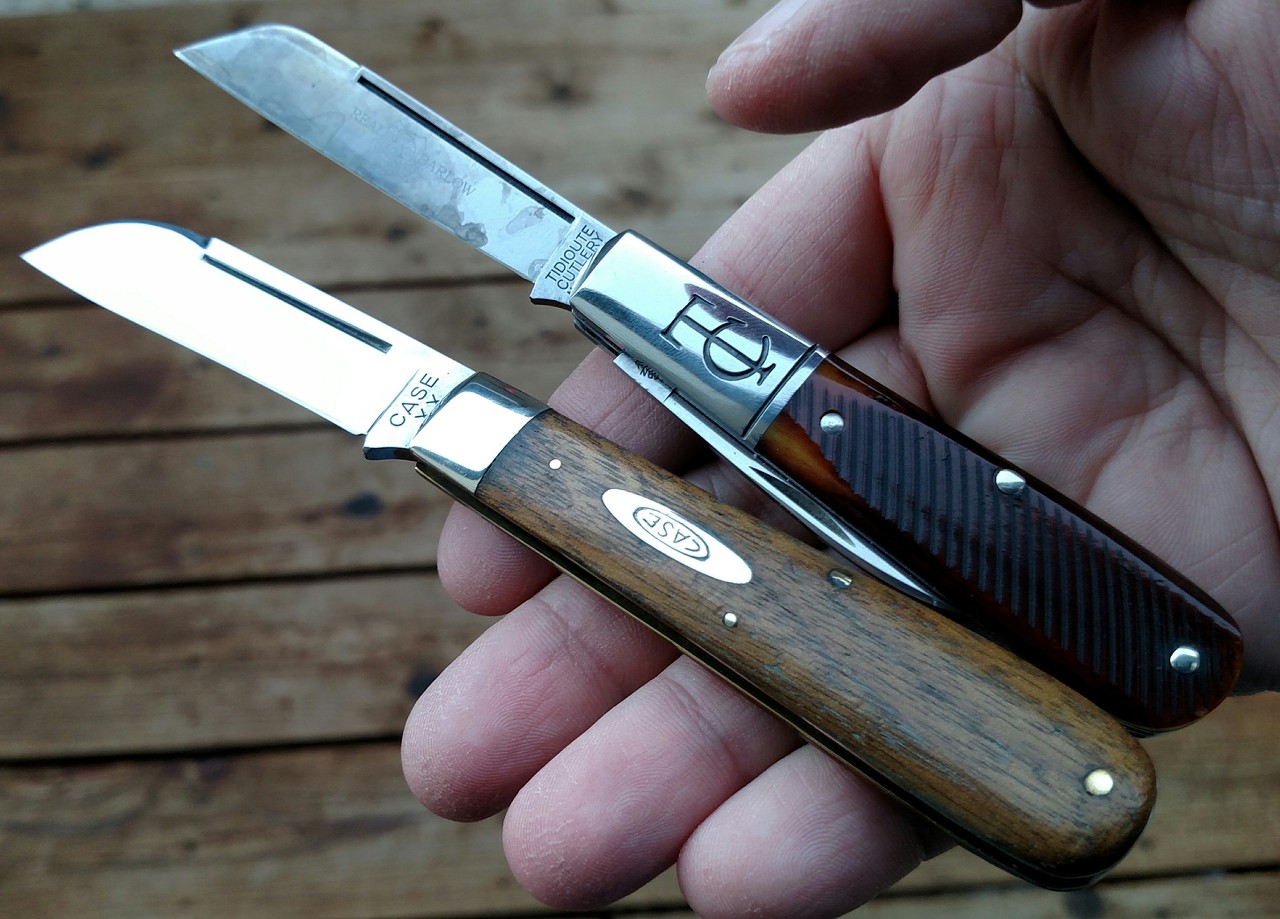 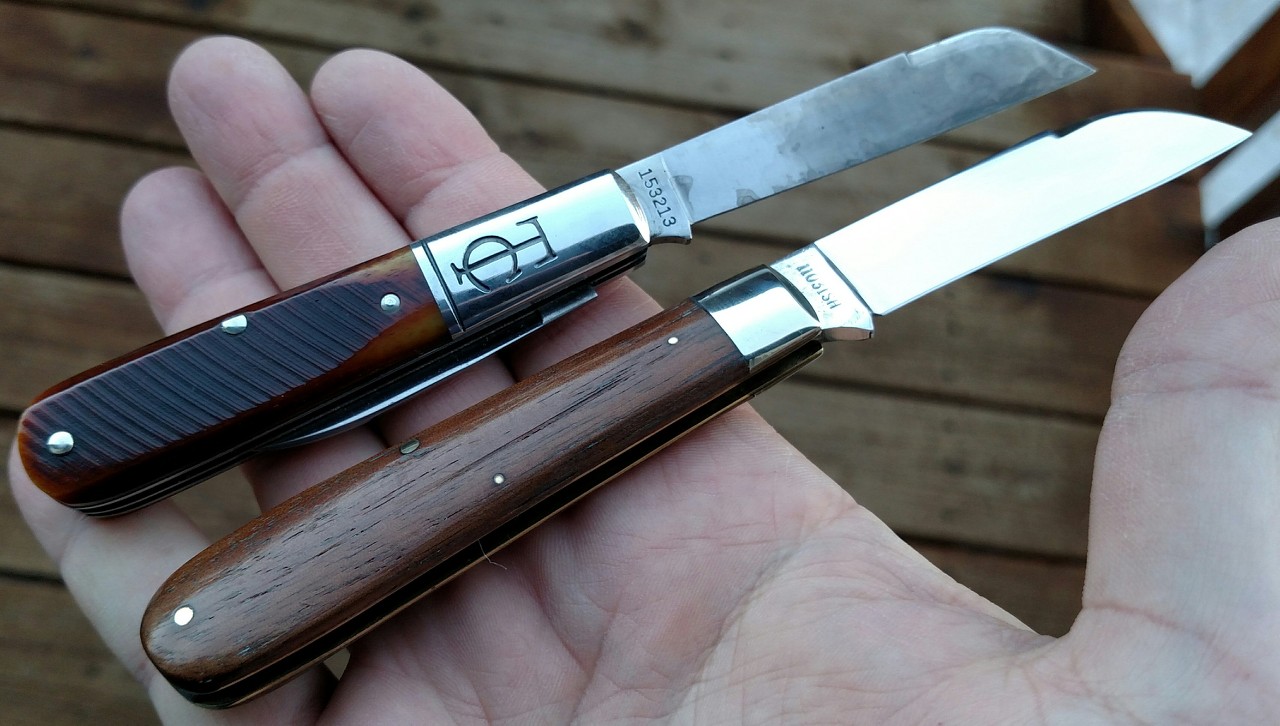 paulhilborn said:
Carrying my 2013 TC today and then this Case XX 11031SH with Walnut covers arrived in today's mail

Hi Dave, I JUST sent you a pm

They are however very NICE knives 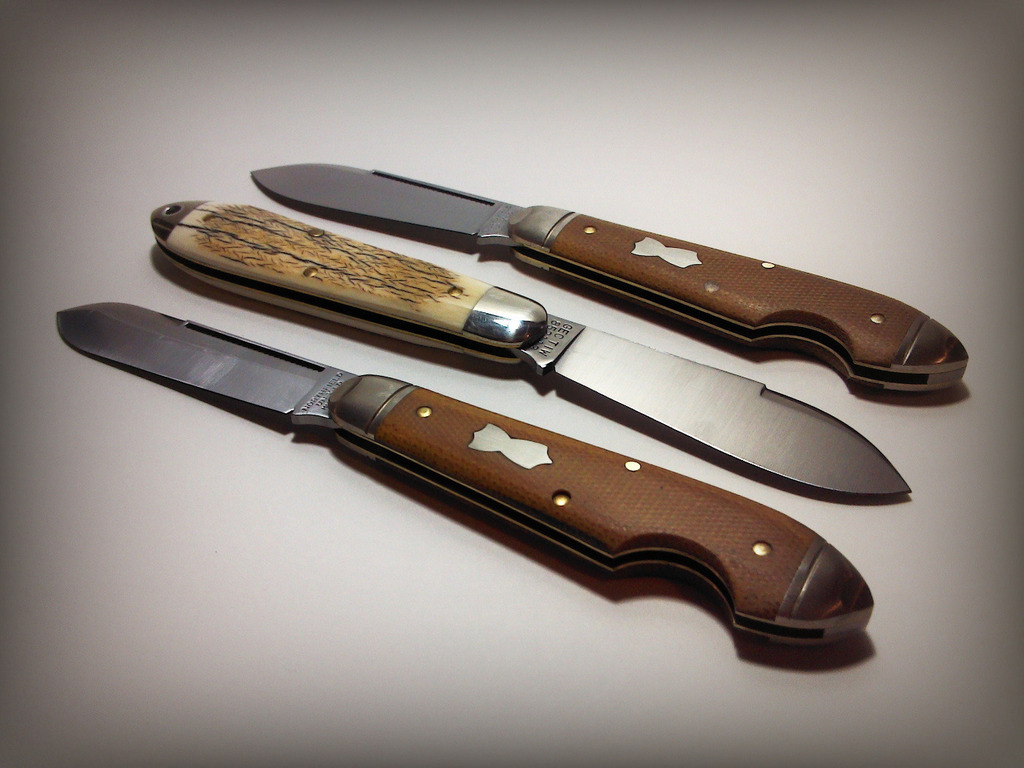 Fodderwing said:
Thanks Jack! But believe me, it ain't so.

Outstanding Gev! Happy Birthday to your Dad!
The ebony coke bottle is divine.
Click to expand...

Thank you my friend !

paulhilborn said:
Carrying my 2013 TC today and then this Case XX 11031SH with Walnut covers arrived in today's mail

I also have one from 1977. The later versions did not have the nice swedge. I think they stopped including the swedge in 1970. 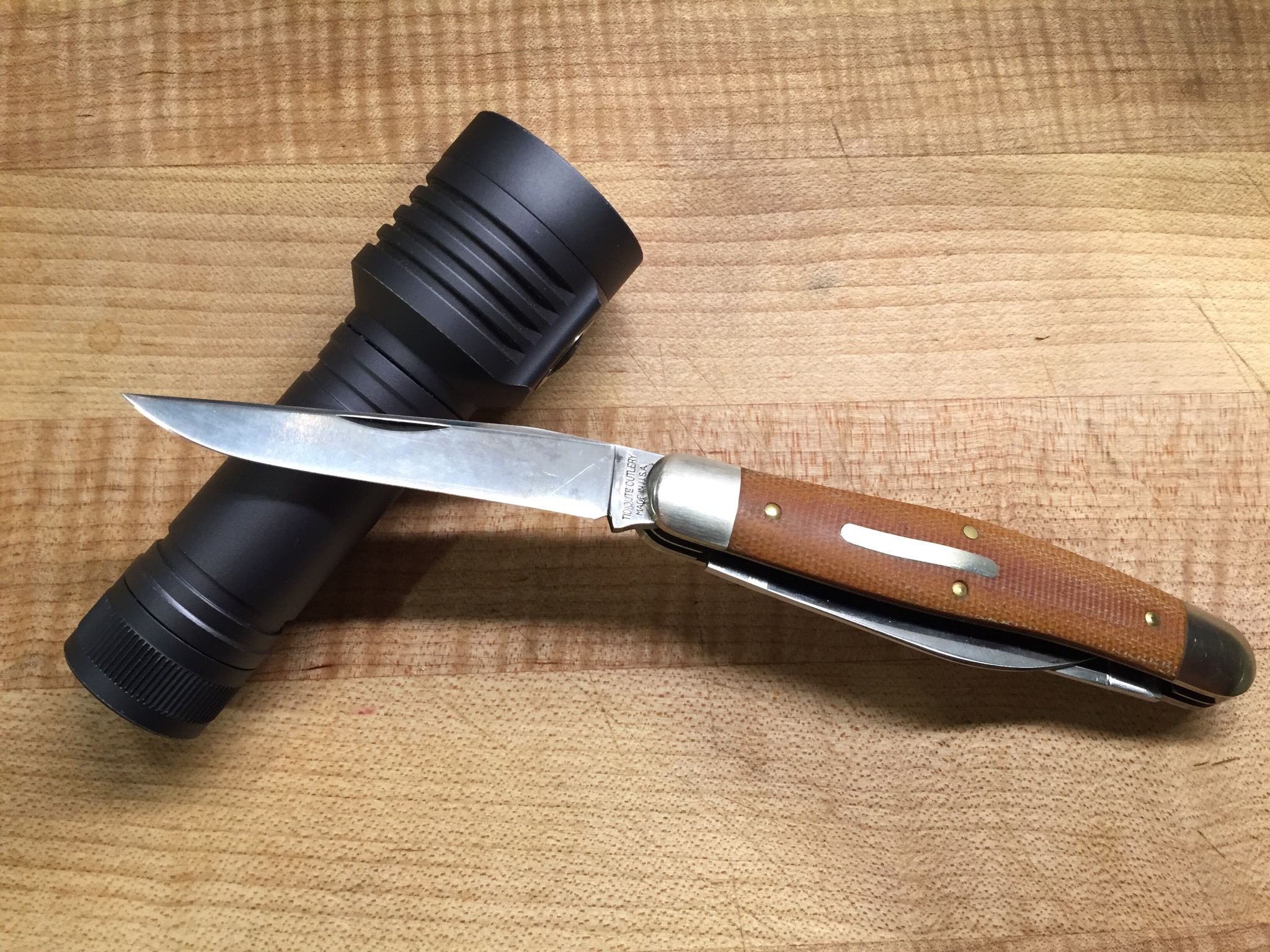 paulhilborn I love your new Case!

Travman Nice ones too!! I lost mine from 1976 to customs at the airport not too long ago, such a bummer. Sure do miss that knife. I’d love to get an earlier one with the nice swedge.

It’s been the 78 for me the last 10 days then in came the 66 today just in time to brighten up this gloomy rainy day. 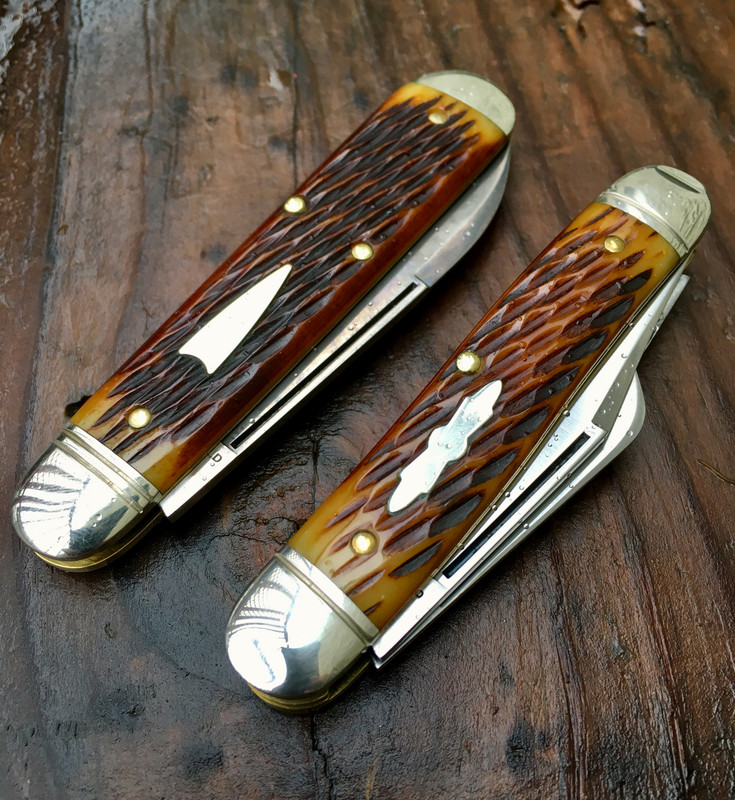 I also have one from 1977. The later versions did not have the nice swedge. I think they stopped including the swedge in 1970.
View attachment 1054374
Click to expand...

The wood on that XX is amazing!

Birthday dinner for my Dad ! 91 and many many more ! 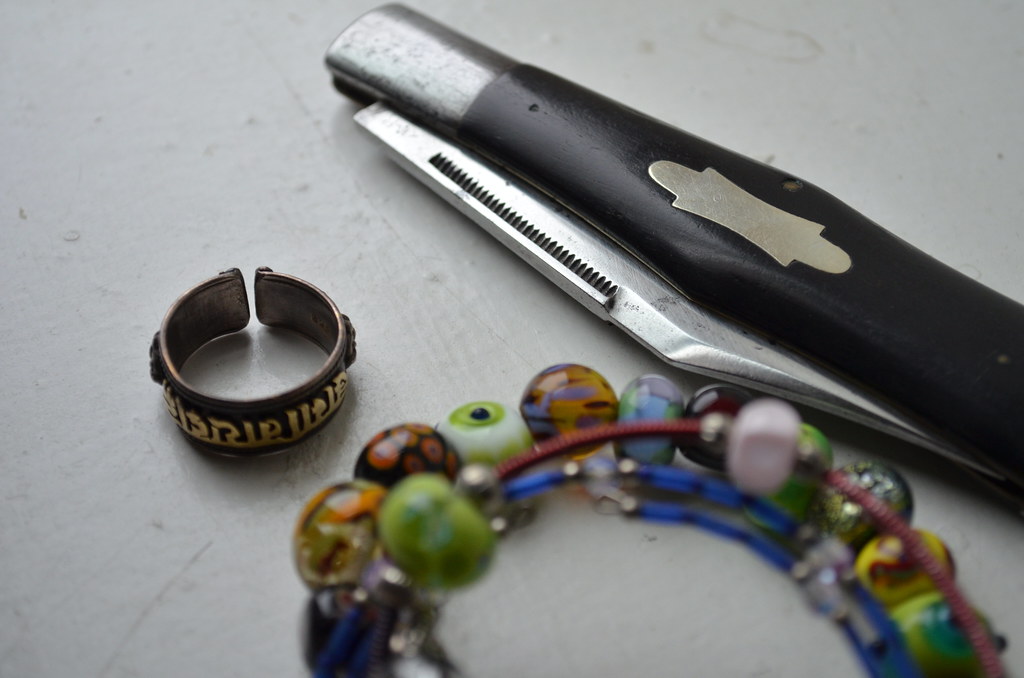 Really like that big Coke Bottle my friend .
Good to hear how your Dad is doing too .

paulhilborn said:
Carrying my 2013 TC today and then this Case XX 11031SH with Walnut covers arrived in today's mail
Click to expand...

Wow what a pair!

I also have one from 1977. The later versions did not have the nice swedge. I think they stopped including the swedge in 1970.
View attachment 1054374
Click to expand...

How cool Travman, I owned that gem at one time

that one is so unique with those DARK covers

I regretted letting that one go, so I've been looking for an adequate replacement

I think they had the nice cut back swedge till 74 if memory serves? they have the circle CASE shield as well 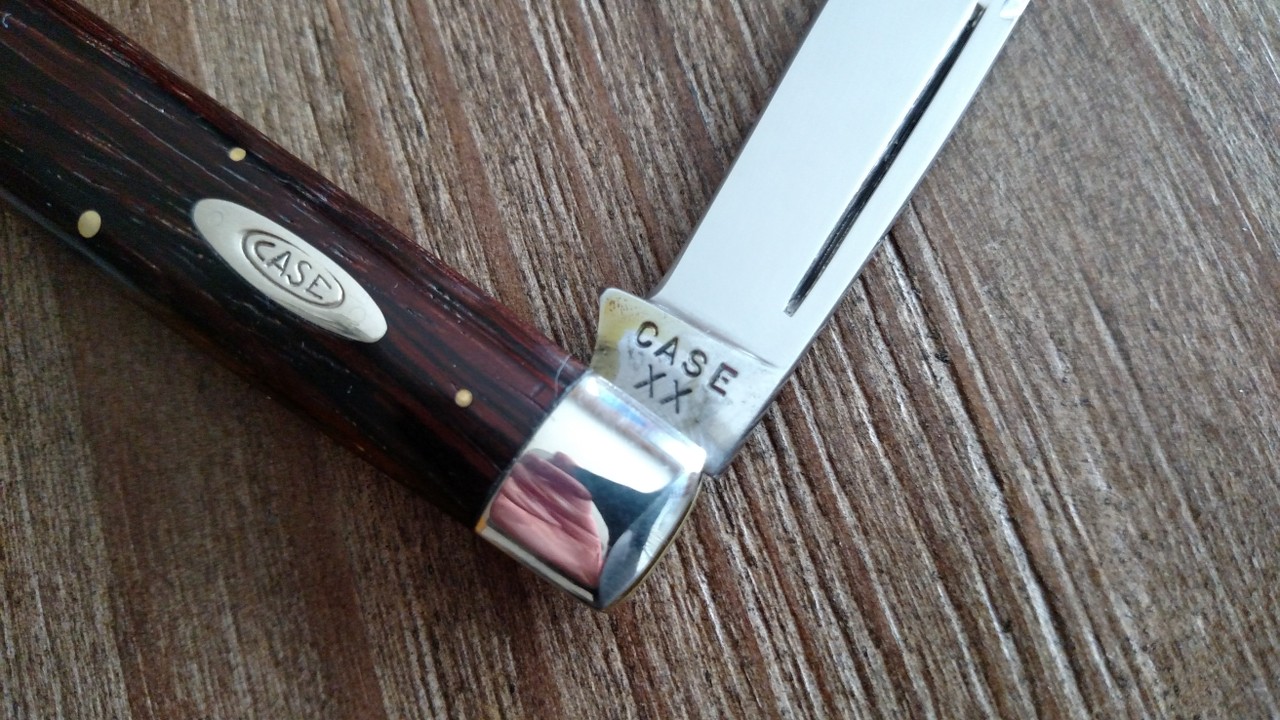 Fodderwing said:
Wow what a pair!
Click to expand...

Hope everyone is having a good weekend, and that y'all have a relaxing Sunday I'm carrying these two, an A.Wright & Son Lambsfoot (Big 'Un) in antique ivory, and a vintage Kent Fish Knife @r8shell recently gifted me

As much as I admire your White Wright Knight, the fisherman in me favors the Kent Fish Knife, Jack.


Half/Stop said:
That’s a very interesting sticker you have there my friend! I’m just curious how many fixed blades your goodie box contains!
Click to expand...

Half/Stop said:
Stuart, that is three outstanding knives my friend! I hope to be able to examine them up close sometime!
Click to expand...

There are few fixed blades in there, Ron. That one is by Ed Love; incredibly light weight for its size. The 2OTs were upstairs when we were downstairs. I'll rectify that next time.


SteveC said:
This one came in yesterday so I'm totin' it today
Click to expand...

Buzzbait is correct, you've found a rainbow with a fabulous old knife mother lode at its end. Great blades and peachseed on that Schrade and the luscious bone on the barlow - sweet.

Thanks, and back at ya.


black mamba said:
Mark, the ram's horn looks good to me, so I'll carry my Bolus drop point to church with me this morning.
Click to expand...

That's a handy looking hunter, Jeff. The blade looks more like a skinner (e.g., Sodbuster, Plow, Bull Nose) than drop point, but it could be the angle and it looks useful. I've not used ram handles when wet, but i like their looks.

Is the blade etch a depiction of a cutler at work?
Click to expand...

5K Qs said:
Peanut of the Week is a Case Tru-Sharp peanut in brown jigged delrin (thanks, Cory):
Click to expand...

Thanks, GT. Yes, the cutler is laying on his stomach on board attached to the grinding wheel. Out of your tremendous trio, I'm partial to the peanut.


Gevonovich said:
Goodness what a trio...cat calls and whistles !!!
Click to expand...

Jak3 said:
Wow, I have no words for those absolute beauties. I've no idea how you ever found those but you did great!
Click to expand...

kai76 said:
@SteveC and D Duckdog You guys are killing with me those beauties!! Outstanding knives Steve and Stuart.

Pàdruig said:
I love those old Schrades, Stuart! I had the opportunity to handle one of those when I saw Charlie and Barry at the Oregon Knife Show last year. I believe it was that knife that served as the basis for GEC's Washington Jack.
Click to expand...

Thanks, guys. That pair of 2OTs is pretty special, as they are the reason that I came to Blade Forums. And they are quite handsome, if I do brag. Yes, Dwight, they are like those very iconic boats (I love them!!) and, yes, Dylan, I understand they may have modeled for the Washington Jack.


Pt-Luso said:
Today again with the GEC # 83 in 440C and still the Portuguese with scrimshaw...
Click to expand...

Those are really beautiful knives, José.

(I saw in a later post that you've moved from "the first" to the "many" on the snowflake count; stay safe out there.

Thanks, GT, just some old customs that I found in one of my piles. I enjoy honoring their makers. Yes, the snow persisted. I went out this moring at 11:00 a.m. and coame back in at 3:45 p.m. after a snowshovel-thon. Helped neighbors and then got our vehicles out, but our hill was still too icy to risk venturing out (regardless of 4x4). 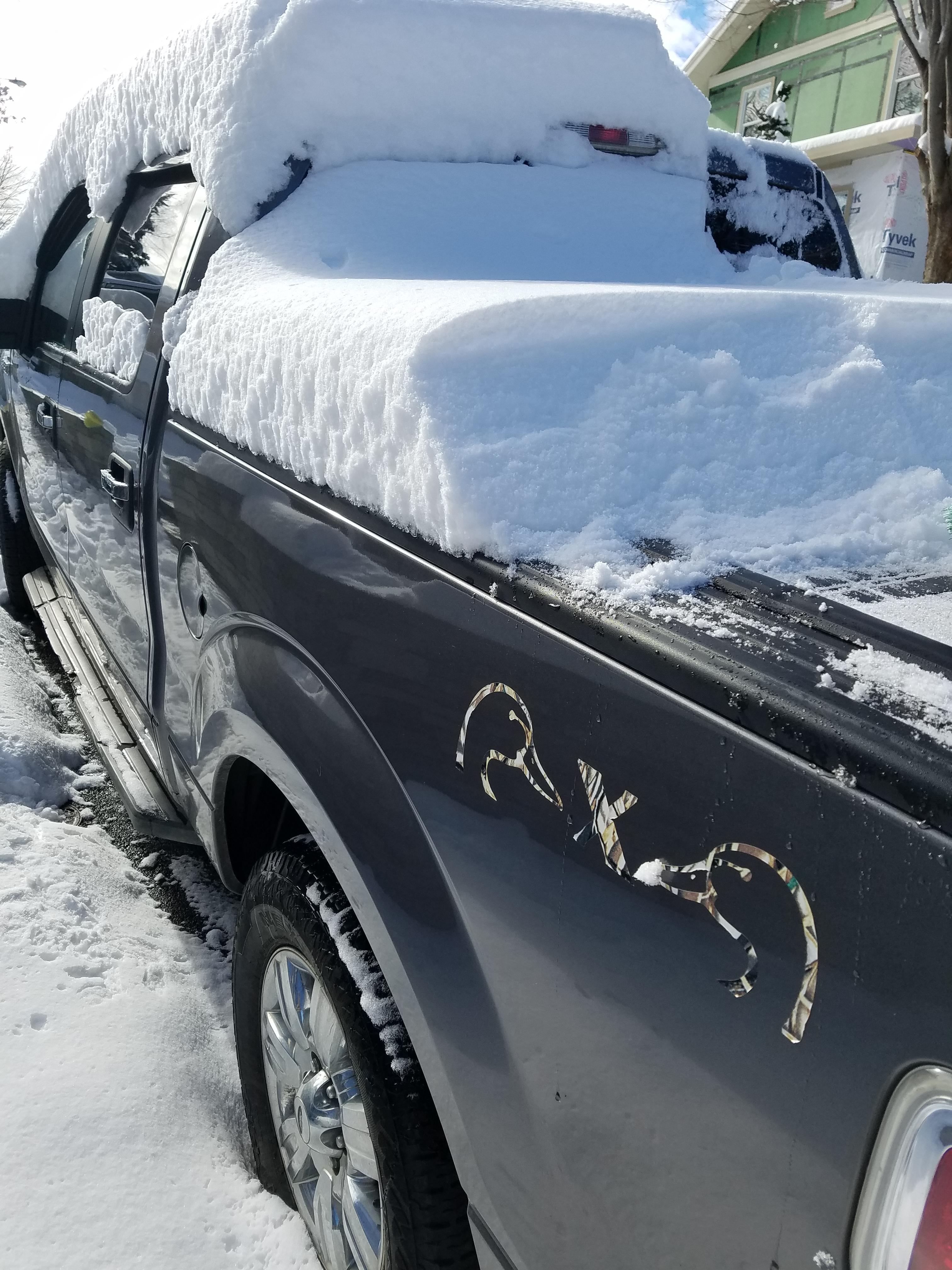 I like that knife and that blade - so useful and compact.


paulhilborn said:
Carrying my 2013 TC today and then this Case XX 11031SH with Walnut covers arrived in today's mail

Just peachy, Nick. You and Steve are setting this thread on fire with some of those old beauties, too.


Jack Black said:
You had Uri Geller round again Stuart?

Amir Fleschwund said:
I don’t think your dinner fork appreciates being turned into an olive fork, at least judging by his gesture.
Click to expand...

That Martini was a helpful restorative after a first day of the snow fall. I was "forked" after tending home fires, but nothing like the workout of today. Manhattans were the libation of choice tonight. 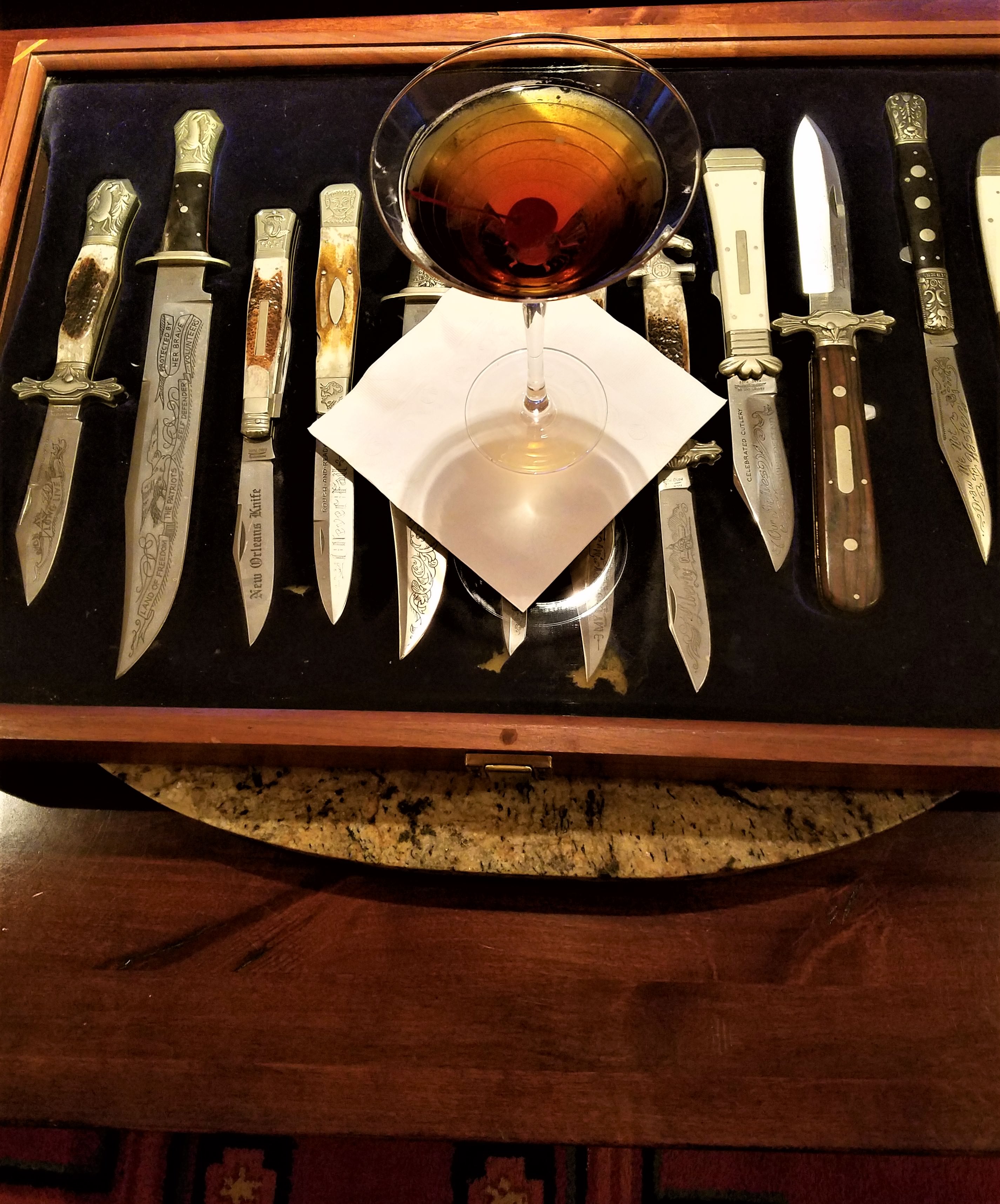 Duckdog said:
There are few fixed blades in there, Ron. That one is by Ed Love; incredibly light weight for its size. The 2OTs were upstairs when we were downstairs. I'll rectify that next time.
Click to expand...

That’s a lot of snow my friend! Be careful and don’t over do it with that snow shovel!
W

drop_point_hero said:
I cannot stop carrying this one. 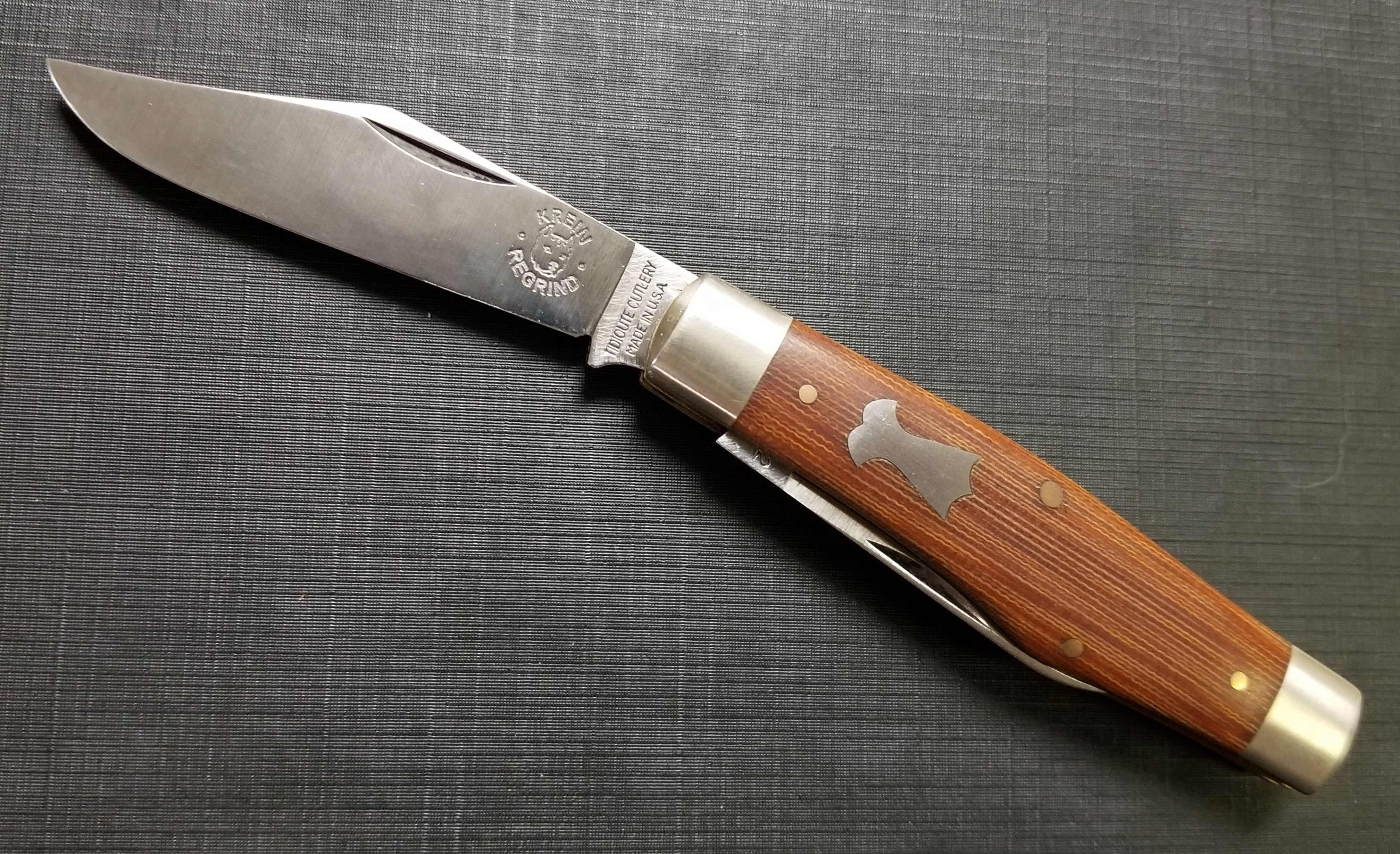 BTW, what is that shield called? Looks similar to a Corset but slightly different. 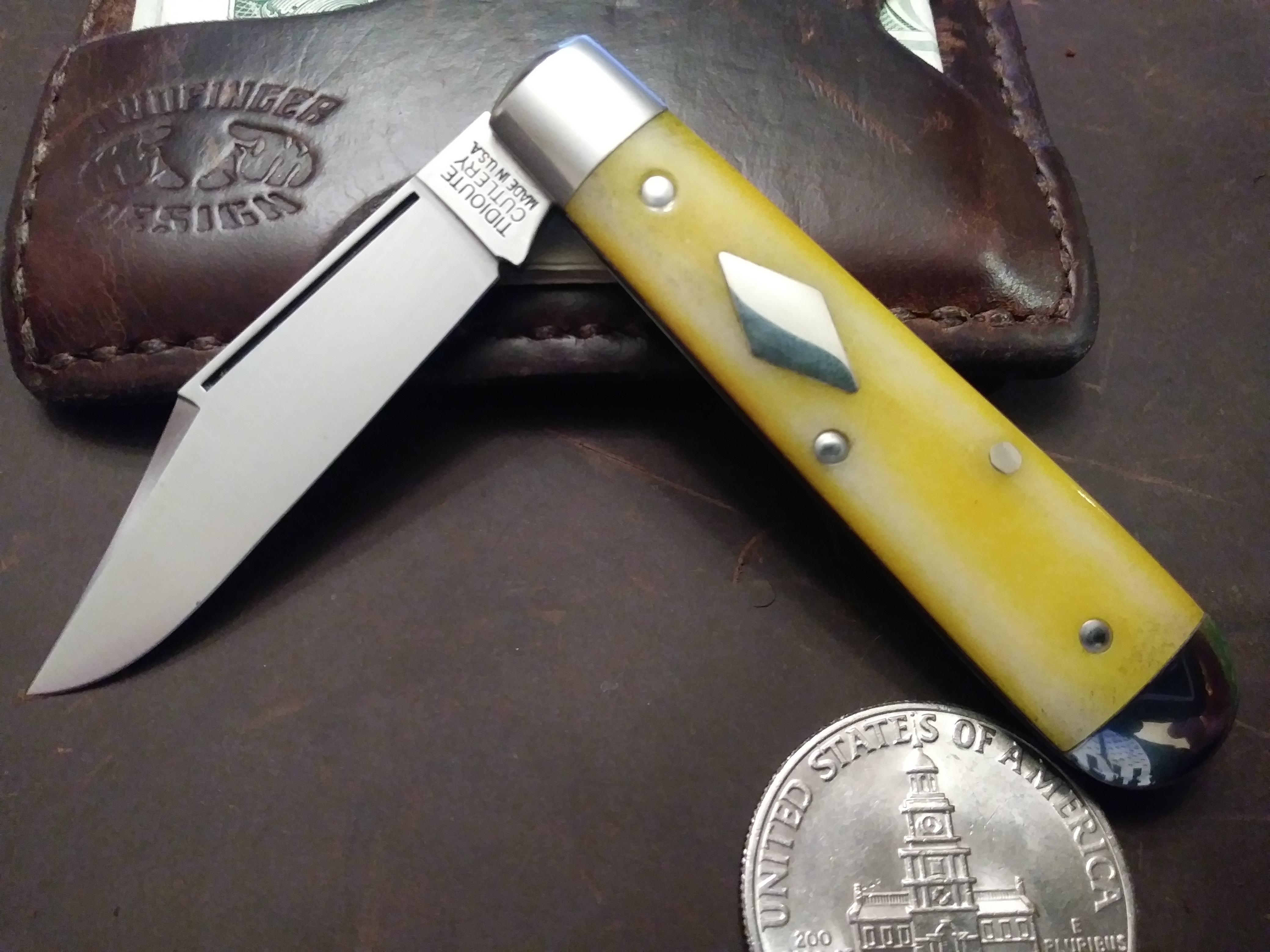 paulhilborn said:
REALLY like how that has aged Taylor

Thanks Paul. I think so too. It deserves more time in my pockets!

Thank you, Stuart, the Bolus drop point is very sodbusterish, and being a hunter, the skinner blade is just why I got it. Can't wait to try it next fall. The M390 blade is VERY sharp and should do a bang up job on any sized game: a perfect mate to my larger fixed blades.
You must log in or register to reply here.
Share:
Facebook Twitter Reddit Pinterest Tumblr WhatsApp Email Share Link
Top
Change Ad Consent Do not sell my data