SnailOffTheTrail said:
Yes, indeed. Only doctor Who, or maybe Marty McFly can travel to Czechoslovakia, as it requires not only travel through space, but as well travel at least 27 years back in time. Czechoslovakia is no more.

Bareš is focusing mostly on hunting fixblades and folders, and quite frankly, I do not like their looks. But this particular model, both design and name, is a nod to the legacy of the Rebec family of cutlers, who had their shop in Sedlčany. Their cutler tradition dates back to napoleonic wars, when Rebec worked as an armourer before passing the craft down 4 generations. In 1920´s or 1930´s they had very popular folder nicknamed Rebec or Rebčák, that was reportedly in pocket of every butcher, fisherman, farmer and boy: 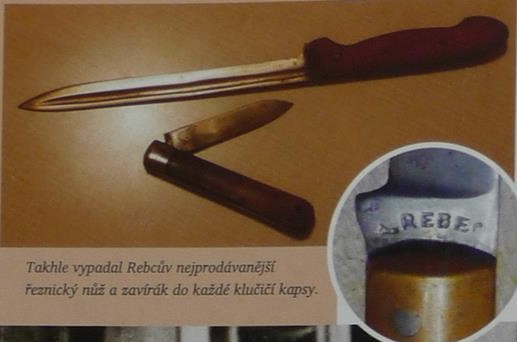 There were 4 brothers in the last generation, one of them was executed with his wife by occupying nazis for aiding the Anthropoid commando, that carried out assasination of Heydrich - main architect of the holocaust. It is heartbreaking to read the words he managed to smuggle out of the prison written on a toilet paper informing his 8 year old son that they are in the place very few return from and instructing him to stay strong, keep his head up, take care of his 2 years old sister, to behave well and study hard to become a good cutler one day. "It´s war and that requires sacrifices" he wrote, "how could we demand to be spared from making a sacrifice ourselves?" Men and women were made of different matter those days, I guess.

Their business was forced to shut down in 1950 by the comminist regime, that did not favour private businesses. Machines, technology and stockpiles of Rebec´s shop and of other cutlers in region was were confiscated and united under KDS, state owned company residing in the same town. The company is still in operation to this day, private again, and producing virtually the same knife under name peasant knife:

But I am digresing way too much. Just a cool story that I found out about only beacuse you asked. Thank you! Tought I would share it. Suddenly I value that knife even more.
Click to expand...

Thanks for taking the time to type that up! My maternal grandmother’s parents emigrated from there to escape the occupation. 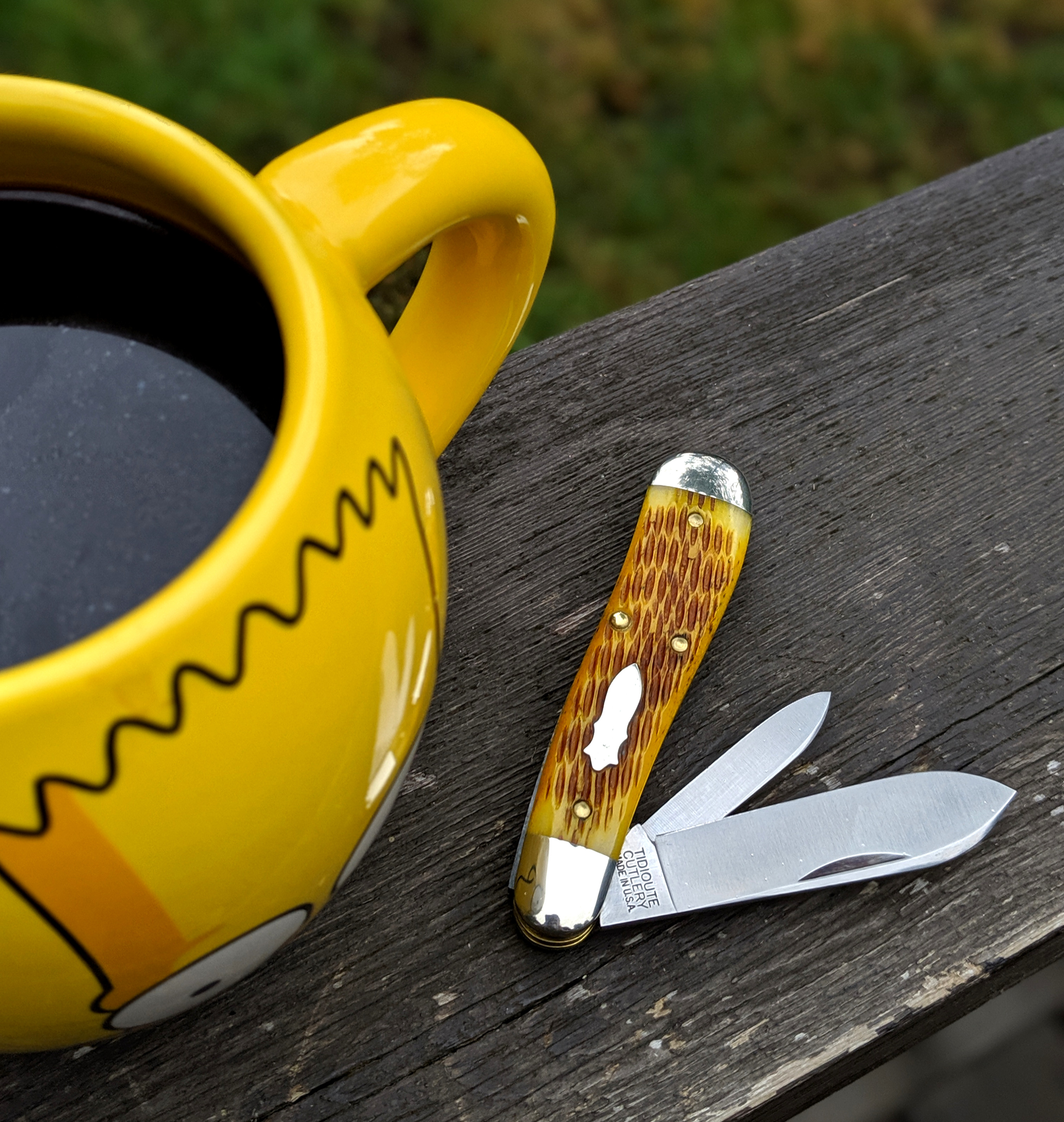 I like that neglected dogleg jack, color and all. It matches your Bart Simpson mug perfectly.

Yikes! Those are nice.

Thank you. I think I'll let them ride along another day.

Old and new friends for Friendly Friday.
GEC #21 Farm & Field Bull Buster in orange delrin, and a much older Voos jack.
Also been carrying my homemade b&t on my belt lately.

The Bull Buster is a big pocket knife.

I love when Osage Orange starts to break in, it darkens to a deep honey brown when exposed to the elements. Hope everyone has a great Friday! 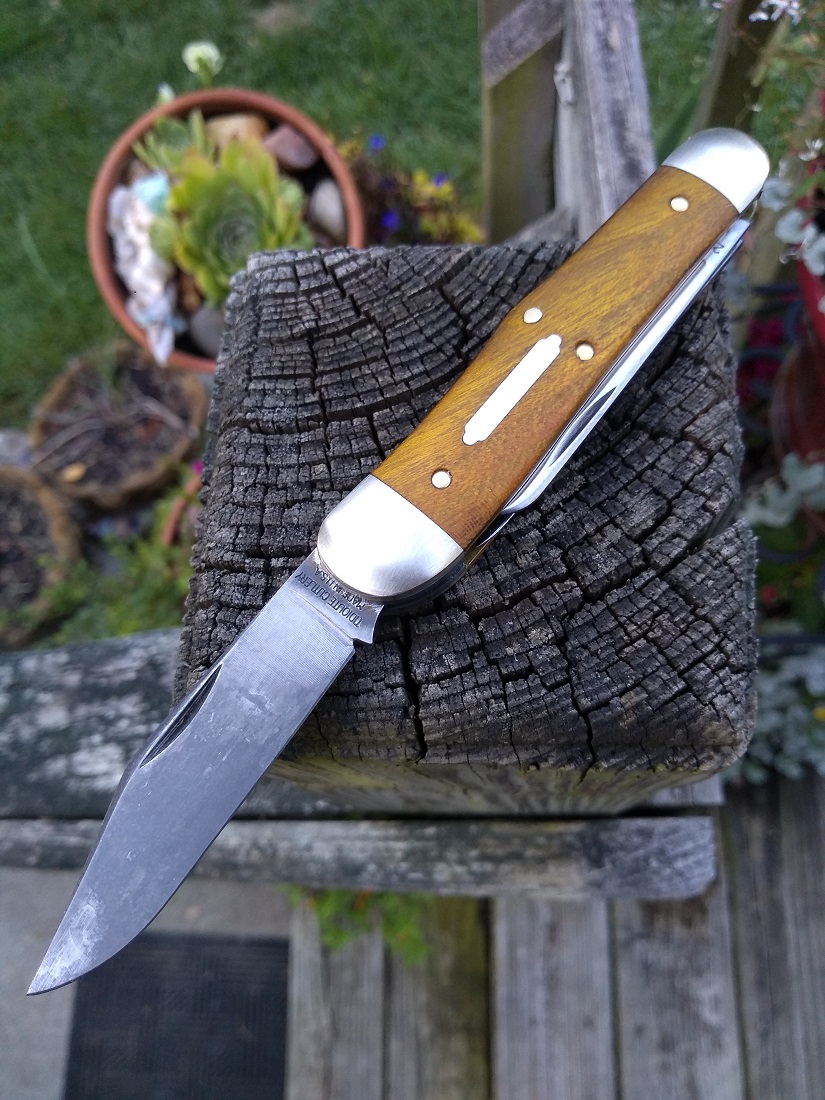 I have one of those. Great knife. Case called it a loom-fixer.

I may need that book.

Duckdog said:
Best wishes to your daughter for a quick and complete recuperation. That looks like a fine "worry stone".
- Stuart
Click to expand...

Thanks, Stuart! I'm carrying it again today, and you're right. That scalloped back is a satisfying thumb rest and place to "worry away". 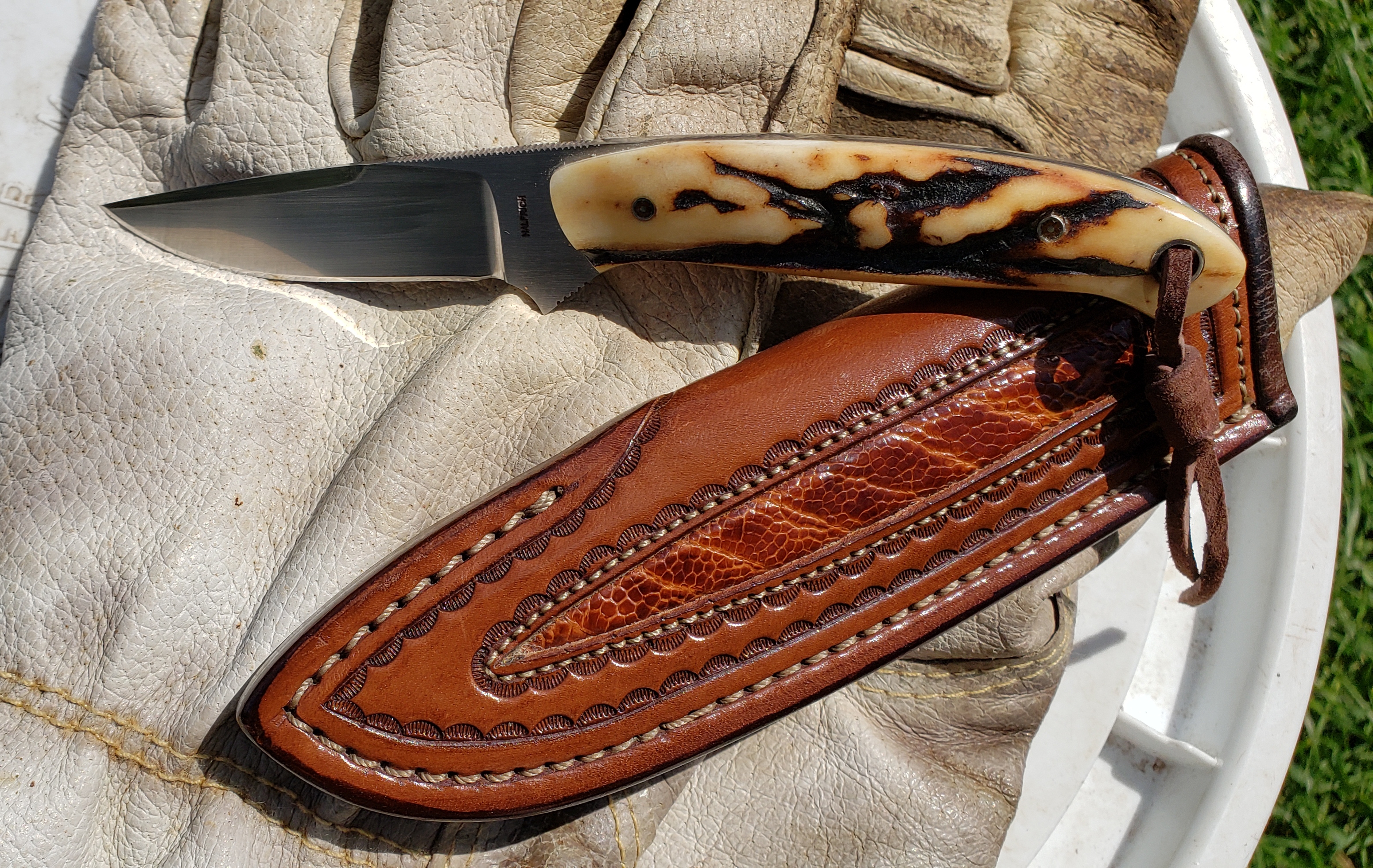 The subject and the background both look tasty, Harvey!

Heading off to the office with the Medium Stockman in my pocket. 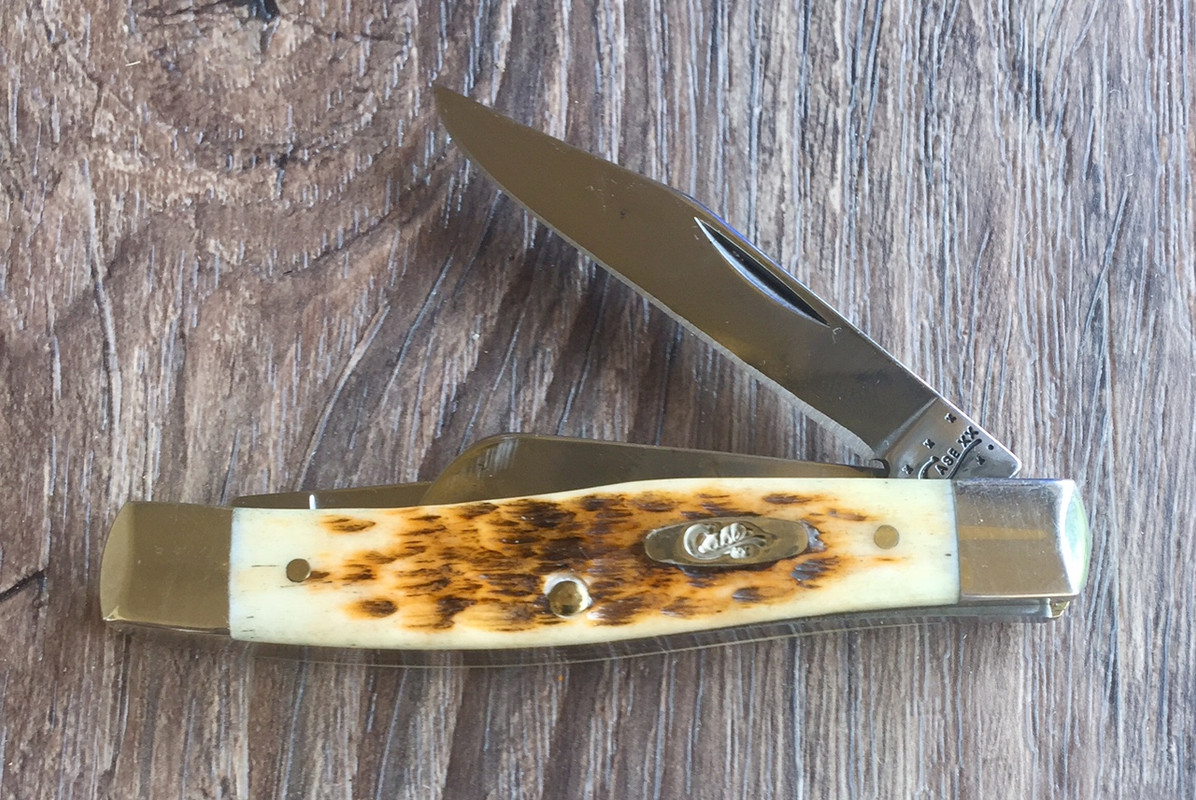 Peregrin said:
The subject and the background both look tasty, Harvey!
Click to expand...

Thank you Gary. Your Halfrich and Dozier fixed blades are sublime.

cigarrodog said:
Thank you Gary. Your Halfrich and Dozier fixed blades are sublime.
Click to expand... 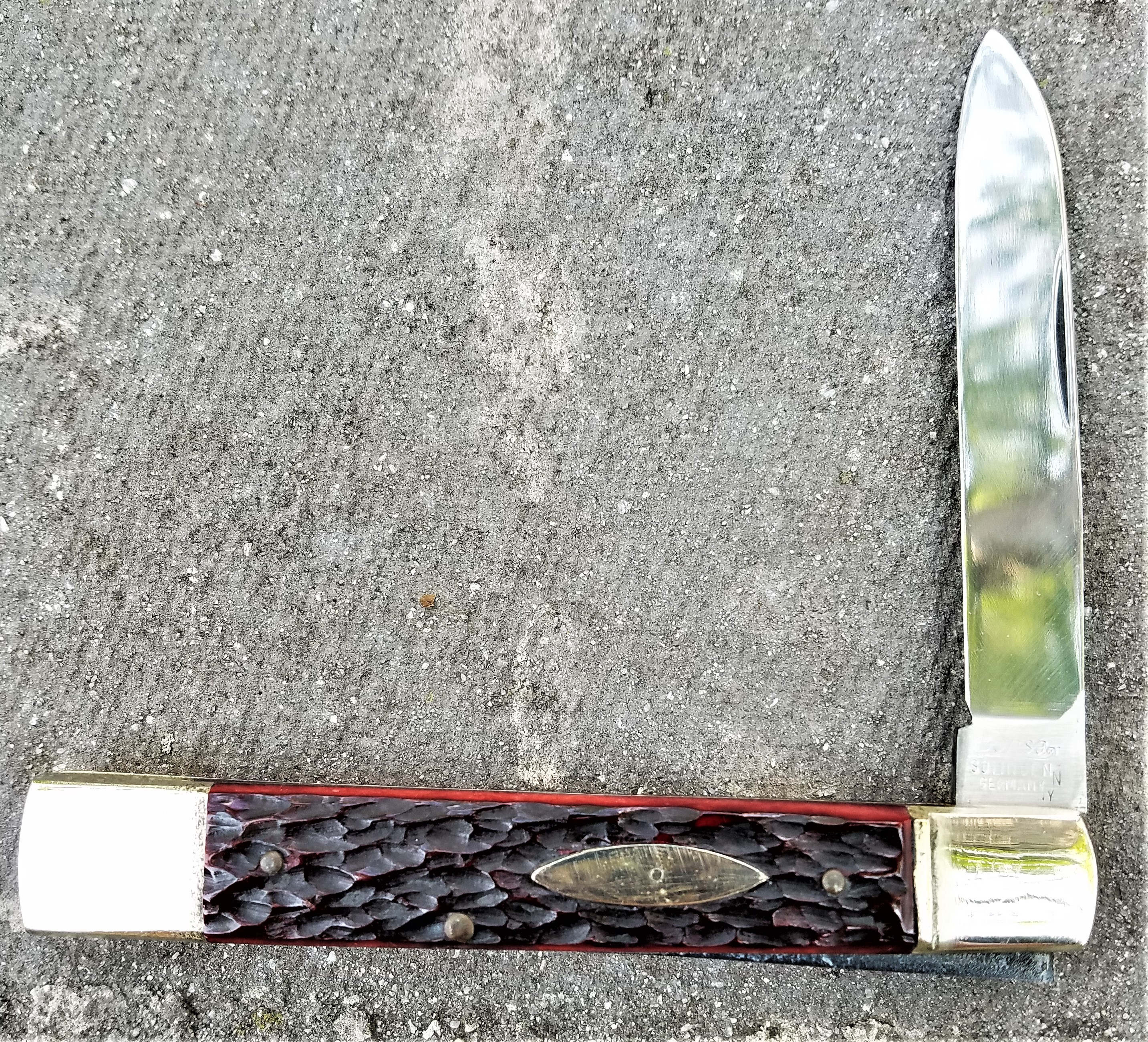 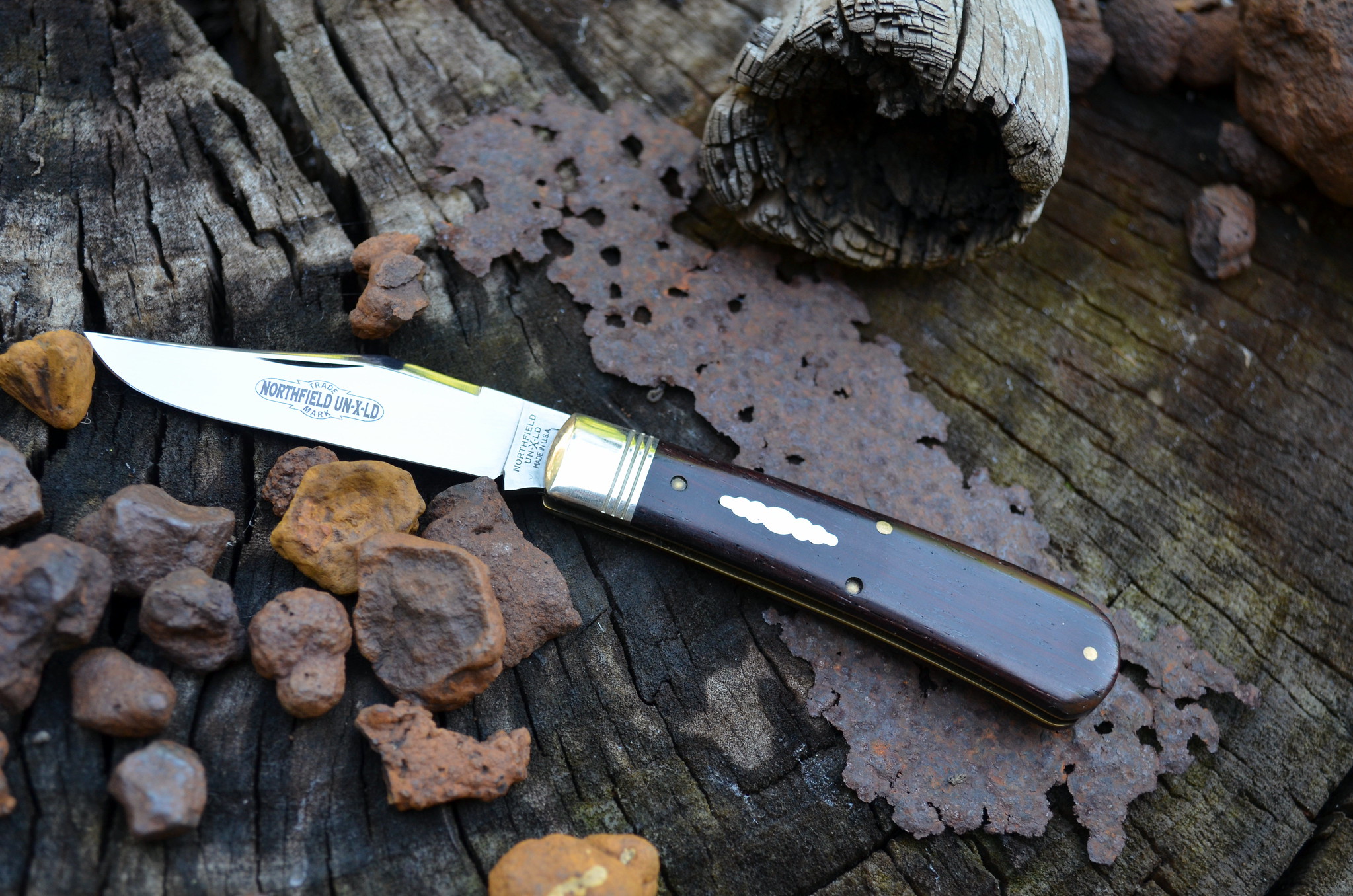 Duckdog said:
I totin' bigly today. A Bonsa (a brand of Boentgen & Sabin, Solingen) English Jack. At 4 7/16", it's a pocketful (bigger than yesterday's Case 6205 R), but still comfortable to carry.