Will open at 5:00 eastern time 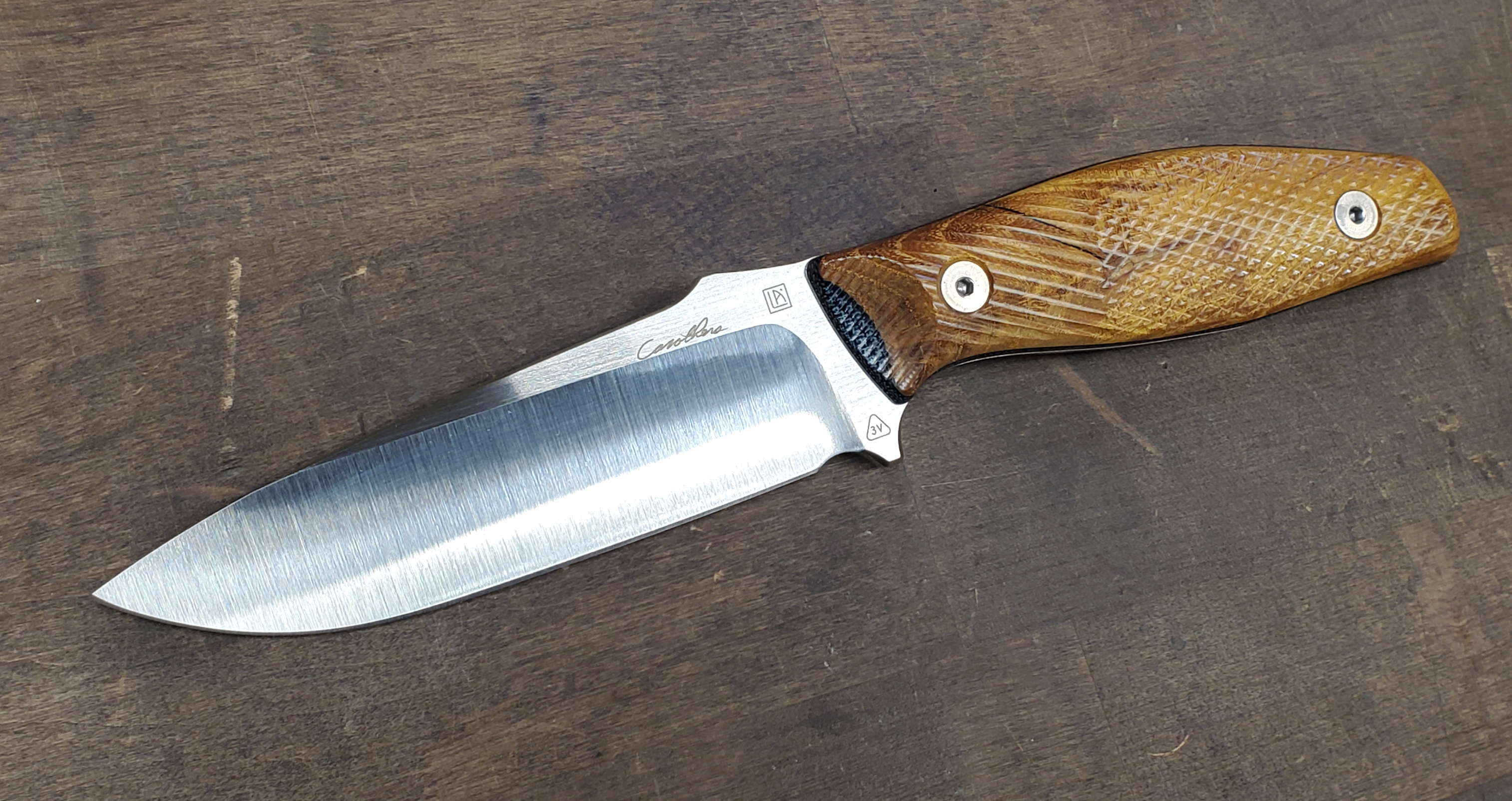 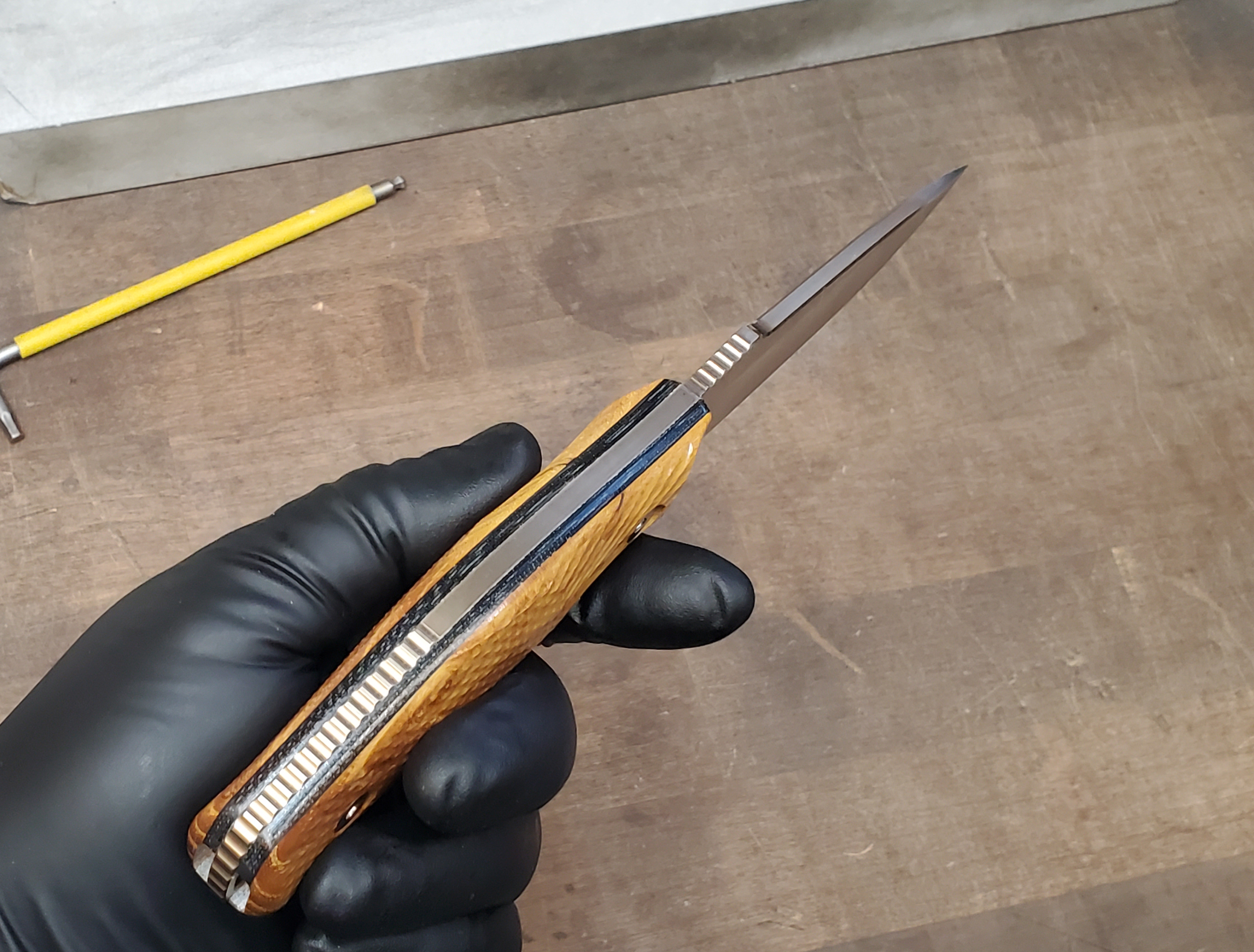 You have to see this to appreciate it. The Osage orange is like a jewel.

This was made from a scrap blade that had a mark on the bevel that could only be fixed with a hollow grind. Mark likes to hollow grind. So a fun project was born.

The wood came from my best piece of Osage. It's an unloved log that laid in the mud for years before Carl found it and brought it home to lay in the mud some more. It was pretty old by the time I got it. It's been in the shop for almost 20 years now and this project used the last of it. This piece here was a particularly nice piece that was also riddled with cracks from sitting in the weather for years. I resin infused it to stabilize the splits and cut these scales from it. I could never sell these in the pre-order as wood because they're flawed, but the final result is really very cool. Think of it as spalting. Except Osage doesn't spalt. Or rot. It's actually black Acraglas.... These scales are sound, don't worry. But if they ever fail I will replace them (with a material of my choosing). I'm pricing this knife as if they were micarta. I just want the wood to see the light of day, it's really quite nice.


This weighs about an ounce less than a standard DEK1. It has a high (past tangent) hollow grind like I used to do on my skinners. It's under .020" behind the edge and still only .025" 1/4" back from the edge so this thing is somewhat like a straight razor. It will be quite slicey, but I wouldn't baton with it.

No sheath included. Kydex tends to scratch and the thinned out blade might not fit a standard sheath right. You might get one of the leather makers to make you something.

Close but no cigar... Love the hollow grind. Good catch!
A

I'd love to get this!

I came out my bunker for this! Hope i won

ugh i was way off lol
K

I thought the appropriate place for the sale was in the knifemaker’s market (where I was). Oh well, live and learn. Congrats to new owner.

This is such a beautiful knife, my pictures really don't do it justice. Mark and I had fun making this. I hope you enjoy owning it.

Whew, my wallet is so glad I got sucked into responding to a work e-mail.
V

Nathan the Machinist said:
This is such a beautiful knife, my pictures really don't do it justice. Mark and I had fun making this. I hope you enjoy owning it.

Thanks Nathan. It looks awesome!

Tigerden said:
I thought the appropriate place for the sale was in the knifemaker’s market (where I was). Oh well, live and learn. Congrats to new owner.
Click to expand...

Sorry dood. I like to post and lock the oddball stuff so folks have time to read the description and look at the pictures to make up their mind before posting because sometimes our sales move at a brisk pace. Posting and locking is not a normal protocol for that sub so I do these weird sales here on my forum.

^^^^^ No worries Nathan. There was a reason you locked the thread until 5:00 PM . I guess if I spent the time going through previous FF posts ,instead of drooling over this beauty of a knife I wouldn't have had a brain fart.
You must log in or register to reply here.
Share:
Facebook Twitter Reddit Pinterest Tumblr WhatsApp Email Share Link
Top
Change Ad Consent Do not sell my data