If a man can only have one dedicated serrated blade

Lee D said:
Wrong.
Try cutting a seat belt or thick cardboard with a saw vs a serrated blade. One will run circles around the other.
Click to expand...

Silky saw begs to differ. Those things are nuts.

Serrated knife is the bastard child of a saw and a knife.

There are some benefits, but the benefits are dramatically reduced when comparing serrated vs toothy plain edge. Say like a 60 grit stone.

Serrated will stay perceptively sharper, mainly due to the effectively longer edge and changing angles of attack.

Downside is they are an absolute bitch to sharpen.

That’s not even what we’re talking about. Do you think a Vic saw (what was specifically mentioned) would cut seat belts or cardboard as effectively as a serrated rescue knife?
C

Lee D said:
That’s not even what we’re talking about. Do you think a Vic saw (what was specifically mentioned) would cut seat belts or cardboard as effectively as a serrated rescue knife?
Click to expand...

The quote I used said "saw."

A SAK isn't in the same league as a spyderco for a number of reasons. Blade shape, length, blade orientation to handle, steel quality, etc.

Silky saw is just serrations dialed to 11. Sharp as hell but saw teeth and a recurve blade. Proves a point......cutting efficiency is more than just one trait.

I'd say my mom's old Ginsu knife which she probably bought from the TV commercial. Never been sharpened in ~50 years and will still rip through anything needing cutting.
A

Saw and serrated blade = two totally different things. Just try to cut a seatbelt in an upside down car with a long thin flexible saw blade.....not at all practical.....and cutting cardboard, no......Even a Silky won't cut cardboard as well as a real knife, serrated or otherwise. Unlike a real knife blade, you can't just push-cut through. You need to actually saw through it, and the long opposed cutters shred the cardboard badly and clog up in short order. Again, not at all practical, and way more work.


co556guy said:
Downside is they are an absolute bitch to sharpen.
Click to expand...

No, its easy. You just need to use the correct tools. 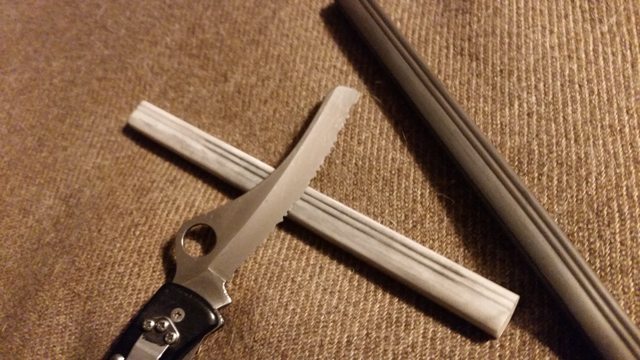 Lee D Been there, done that.

A knife with a sharp plain edge set at 20 to 25 degrees inclusive will glide through a seat belt. (and nylon rope) Although, truth to tell, a knife isn't the proper tool for cutting a seat belt. Mechanic's, Electrician's or EMT shears are better than any knife. Come to that, heavy leather shears or scissors would probably be better than a knife, too.
A serrated blade only cuts with the tips/points of the serrations. They rip, they don't cut.
Examine the "cut" edge of that seat belt after using a serrated blade on it, compared to a plain blade. The plain blade cuts the nylon thread. Serrated blade tears them. The cut edge is frayed when you use a serrated blade.

I understand that in an emergency situation where a seat belt has to be cut to save someone's life, it is more likely the person assisting the trapped person will have a knife (if he/he has any cutting tool ... seems a lot of folks including cops and ambulance personnel , don't these days), as opposed to shears.

Honestly though ... how often does a person who isn't a first responder, have to cut someone' seat belt to get them out of a vehicle? In over 60 years of carrying a pocketknife daily, I've never had to. Not even during the years I was an over the road truck driver. (not to mention that moving the trapped person without using a back board and/or neck brace could cause a fatal or paralyzing injury if the trapped person has a broken/near broken neck or back. You can be sued or that ... and likely lose ...)

I don't know about you, but I base my daily carry on what decades of experience tells me I'm likely to need; not worst case "what if" fantasy.

As for "thick cardboard" to an inch or so thick, I prefer a Stanley box/utility knife.
Considering the silica, sand, and other contaminates in cardboard, I prefer the box/utility knife with easy to change blades, over any pocket knife, regardless of blade steel. Cardboard quickly dulls them all.
200 replacement Stanley blades costs a heck of a lot less than a good pocket knife. You can even get "long lasting" ceramic blades for the Stanley. Allegedly, the ceramic blades are "almost as hard as diamonds" and last noticeably longer when cutting cardboard.

And none of that has a thing to do with the saw on a SAK cutting “about as good as a serrated blade.” Your words, not mine.
T

What's the point of those cutouts?
T

On large hand saws, those cutouts help clear sawdust from cut. I don’t know how this carries over to a frozen food knife.
A

On old school timber saws those squarish sections between the cut outs are called rakers and would have a cutting edge at each corner. The saw would have left and right hand teeth to make a vertical cut on each side, then the raker would peel out the bottom of the kerf. The chips are collected in the gullet and carried out. A saw will bind in the kerf without a gullet of sufficient size.
Depending on how the teeth are made and what its actually intended to cut, the same thing could apply to that Case Freez-Cut knife.
You must log in or register to reply here.
Share:
Facebook Twitter Reddit Pinterest Tumblr WhatsApp Email Share Link
Top
Change Ad Consent Do not sell my data