The Cutting Edge  Which makers have you recently discovered that excite?

Scott Hanson said:
What are your qualifications to make assumptions that none of theses makers know the historical significance of a hamon, are you a metallurgist? are you a journeyman or master smith yourself? Once again what are your qualifications to judge these makers knowledge other than looking at a posted photo and saying they don't know anything about a hamon? Personally I don't think your qualified to pass judgment on what these talented blade smiths know or don't know about hamons, at least not until you get your own master smith rating. I guess a courteous response is not with in your capacity during normal conversation, I guess maybe you think everyone around you misguided, ignorant and lives under a rock. What your saying is like going to the dentist's office looking at his or her credentials on the wall and proceeding to tell them that they don't know the basic function of teeth. I am not a blade smith, but I am not ignorant or misguided, but you on the other hand are clearly not qualified to assess what a journeyman or master smith, eastern or western, know about blade smithing.
Click to expand...

You have made a paragraph about nothing.

At this point in my life, justifying my CV to you seems puerile.

But just to play.....I'm a second degree black belt in an obscure segment of Japanese swordfighting that cuts frequently and knows the difference between shiite and shinola based upon hard lessons.

You may be ignorant/misguided....time will tell for you.

Scott, I was referred to this site by someone quite knowledgeable about traditional hamon. I found it very useful.

I CAN be rude Lorien, but have tried not to be.

Your metric and mine are what separates polite discussion from slaughter.

Thanks! I learned a bit from that link and hopefully others do as well.

Willie71 said:
Scott, I was referred to this site by someone quite knowledgeable about traditional hamon. I found it very useful.

That is great (and exciting) stuff. Bookmarked.
I

So Steven, just to recap then -

1. Commenting on a two year old thread means you're unobservant and stupid.

2. Being influenced by some of the most talented makers ever says nothing about the maker, but at the same time following the traditional methods of Japanese knife/sword making is OK.

3. Sam Lurquin, Don Hanson and Jason Knight know nothing about the traditional significance of hamons.

4. With the exception of Bruce Barnett, no Australian makers know anything about the traditional significance of hamons.

5. You say the knife industry is constantly moving forward and changing, yet you expect modern makers to adhere to traditional methods used on materials that differ from that which is used today.

Your opinion about hamons being an art form that looks terrible unless done in the traditional way is objective, as is all art.

As for the practicalities of a hamon on the battlefield, I very much doubt prancing around the dojo chopping up a few coconut mats bears little resemblance to actual combat...you know, the sort where actually getting killed or badly wounded is a very real possibility.

Some people read things on the internet that they find absorbing enough to comment on...regardless of how old it might be.

Your continued outrage at things that actually matter very little in the grand scheme of things makes me wonder if you've sustained a few too many knocks to the head whilst doing your samurai warrior thing. You really ought to step away from the keyboard and calm down a little.

Anyway, I'm off to finish a couple of sheaths.


PS. To hopefully get the thread back on course, as far as recently discovered makers, I really like John April's work.

Ssteven is trying to turn BF into FB. No old threads and lots of drama.
I don't give a shit about traditional japanese and still like Nick Wheeler.

Because it looks like ASS when the line goes up past halfway, and only an idiot or someone of decidedly low intellect/artistic ability would argue otherwise.

If that is you, than own it.

Being from Australia, that would not be a surprise, as only my good friend Bruce Barnett seems to have a fekkin clue down there.

I think a hamon is completely unnecessary as demonstrated by my good friend Dan Keffeler with CPM3v in a tradtional shape and structure, frankly. If you are going to do it for art, do it RIGHT!!

What an odd way to respond.

Strange that you felt the need to call me an idiot with no artistic ability (If I disagree with you), then go on to denigrate every other knife maker in Australia except for Bruce. Are you okay?

I disagree that any knife with a hamon that goes past halfway "looks like ASS". That's your opinion though, and you're welcome to it, just don't mistake your personal opinion for objective fact. A quick google search will yield multiple Lurquin Bowies with hamon that extend well past the halfway point. In my opinion, these look fantastic.

Is this perhaps just an issue of semantics? Do you object the the word hamon being used for anything that wouldnt be correct on a traditional japanese sword? What if we just call it a hardened edge line? Would we still have to make it to Japanese specs in order for it to be legitimate?

It's bizarre to me that you're so determined to limit the creativity of western knife makers, working in a western style, just so that one element of their work is technically "correct" by Japanese sword smiths' standards.
C

I think there are two ways to look at hamon from the function and aesthetics and there are plenty of times when the two collide, but the assumption that some hamon are "ass" based on your subjective viewpoint is a very poor argument and an even poorer judgment and when you consider the Fukuoka Ichimonji smiths and the fact that most tanto have hamon exceeding 50% of their width, are they all 'ass"? If you look further at a sword like the Yamatorige whose wild hamon is both visual and functional, how do you describe that hamon? I would venture to say that it ranks as one of the finest swords of all Japan. As for modern bladesmith taking creative license, let them have at it and create their own, Western generated aesthetic base on their personal vision, modern metallurgy, a compliment to their work and a pinch of the fantastic thrown in. I will only add this, Nihonto are judged by strict and harsh guidelines but most modern knifemakers/ bladesmiths are not making Nihonto and are neither bound by these strict conventions nor should they be measured against something that they are in fact not actually making, why limit the creativity and potential of what may come out of this process?

Wow! It'd be hard to find another thread where so many Members and fine Makers were denigrated or disparaged in the course of a conversation......carry on, I guess. [emoji17]


Sent from my iPhone using Tapatalk

The concept of discussing new, exciting makers is a timeless and useful topic. Nothing wrong with bringing it up again. It also affords some perspective on the very topic itself, since we can see how these makers succeeded, or not, in the last 5 years, and of course we can discuss today's exciting makers.

As to Hamon, the custom knife world is always a split and balance of traditional vs modern, art vs utility. There's room for all of it. The idea that anything must be one way is incorrect. It's an opinion. Purists are certainly entitled to their opinions. And nothing wrong with keeping tradition alive. But again, saying anything can only be one way certainly seems like and usually is, an opinion. I strongly doubt gifted smiths aren't aware of the reasoning for having a Hamon, nor the traditional execution of one, but people who buy knives determine what a maker makes, if the maker wants to eat. People nowadays seem to like Hamon as an art form, and makers would be foolish to ignore that. Doesn't mean they aren't aware it's there primarily as a visual, artistic feature. Like for example, folding knives with them. I think it's cool. So do a lot of people. Which is why makers make them. Michael Burch seems to be doing quite well, as does David Santiago and Walter Randolph.

COOP - thanks for the mention, as I'm truly honored.

The makers that really excite me are Spencer Clark and John Doyle. The first time I saw their work adjectives like elegance and simplicity jump out at me.

This has been a most interesting thread BTW

Because it looks like ASS when the line goes up past halfway, and only an idiot or someone of decidedly low intellect/artistic ability would argue otherwise.

If that is you, than own it.

Being from Australia, that would not be a surprise, as only my good friend Bruce Barnett seems to have a fekkin clue down there.

I think a hamon is completely unnecessary as demonstrated by my good friend Dan Keffeler with CPM3v in a tradtional shape and structure, frankly. If you are going to do it for art, do it RIGHT!!

I guess this one looks like ASS? LOL I love ya, man!

Look guys it's pretty simple. An ass must take up highly specified parameters and if it does so, it is not an actual ass. It is a historically correct derrière. Any ass bigger than those parameters is technically an ass, and anyone who likes one is stupid and probably Australian.

CapitalizedLiving said:
Look guys it's pretty simple. An ass must take up highly specified parameters and if it does so, it is not an actual ass. It is a historically correct derrière. Any ass bigger than those parameters is technically an ass, and anyone who likes one is stupid and probably Australian.
Click to expand...

You're just applying your strict traditional French derrière standards to asses that aren't even French.

Today's ass enthusiasts are using elliptical machines and advanced Nordic tracks that weren't even around back when the classic French derrière was perfected, so don't try to hold them all to that old standard. Why would you want to limit today's abundant creativity?!

Don Hanson III said:
I guess this one looks like ASS? LOL I love ya, man!

Traditional Muromachi Period, tactical, oversized, dress folders in Japan never would have had a hamon like that.

It was pointed out to me on the Australian Blade Forums that the hamon on this Bowie does in fact look like ass. Or rather asses. I count at least five. 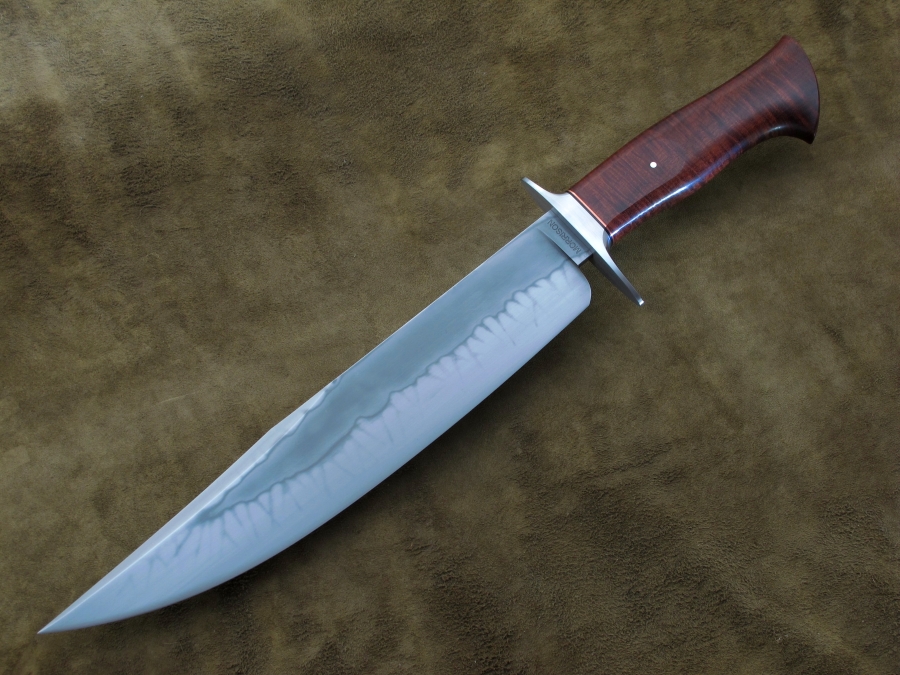