The Gift of Bacon

This better to give than receive! In the spirit of the season, I decided to usher some family and friends into the heard. They were also ushered into the world of Buy Brown. Since this thread is useless without pics.... 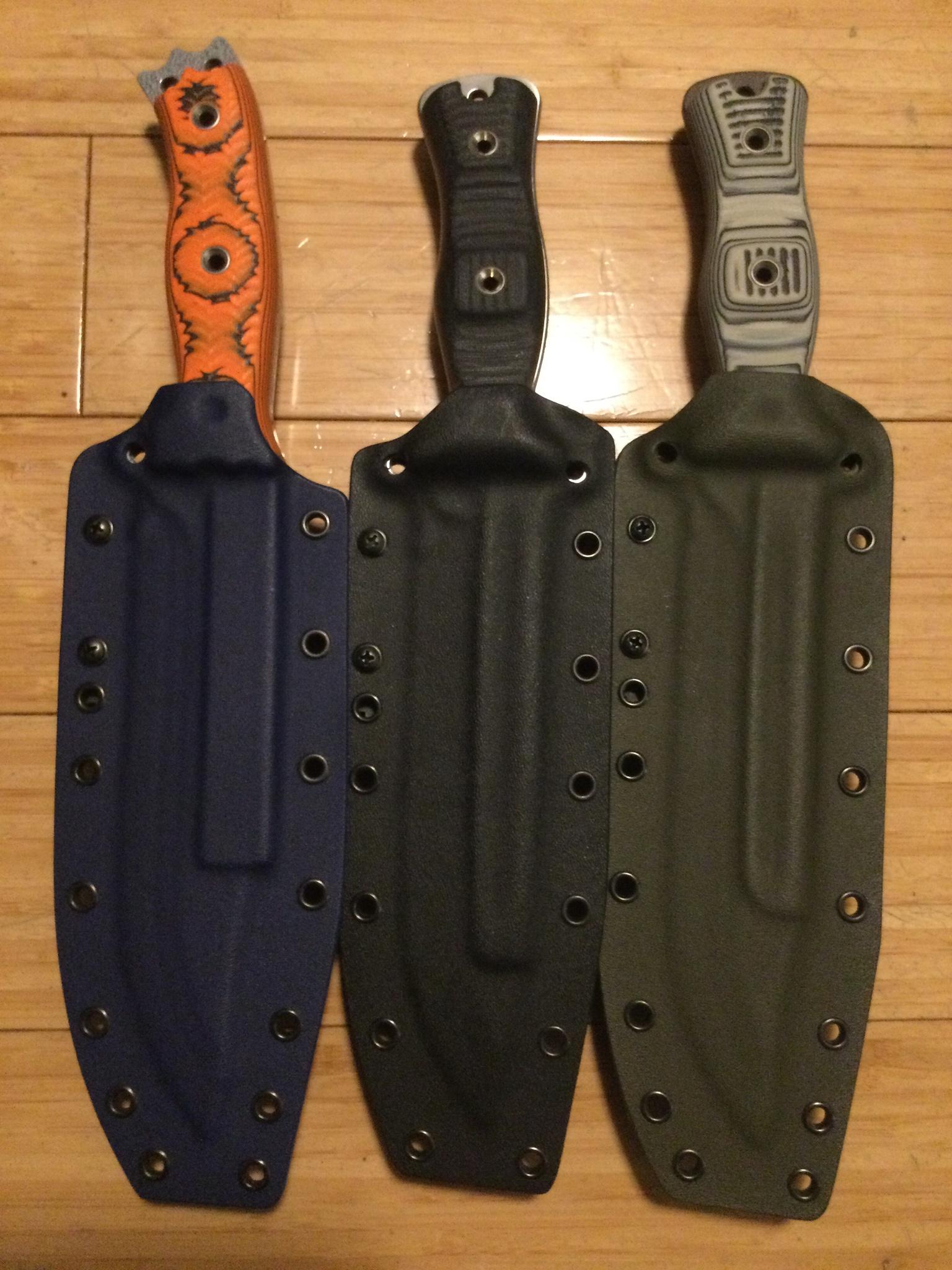 First up, the HR2 now belongs to my brother-in-law. He went to UF, so the orange and blue are a perfect combo. He couldn’t believe how quickly and easily he was able to chop up a 4x4 with it. 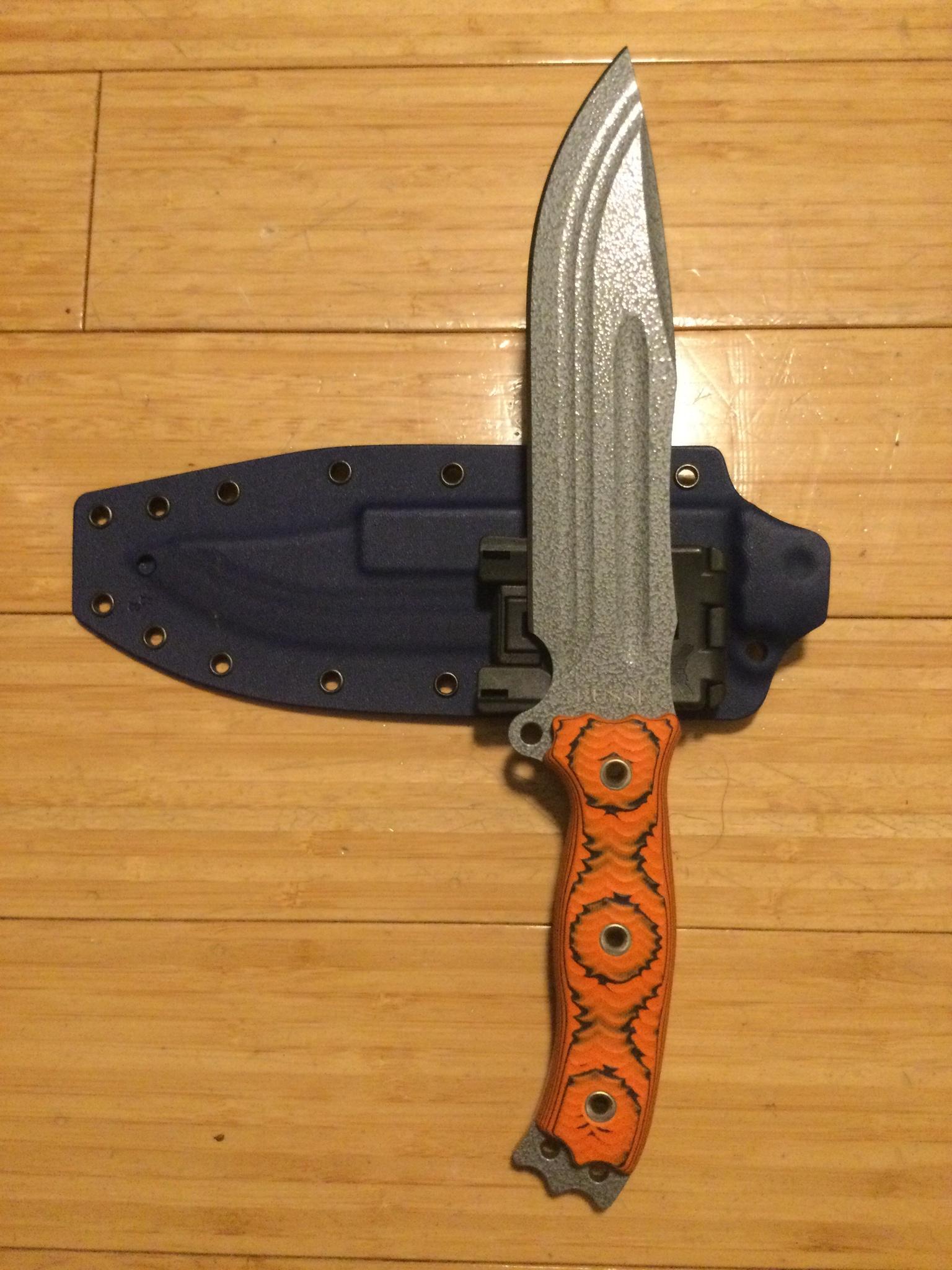 Next up, the TGULB has moved up to Tennessee. One of my best friends, (who happens to be the one friend I can honestly call a knife nut), has never owned a Busse! Says he breaks/looses too many knives to ever spend that kind of money on a blade. Well, he’d better not lose this one! 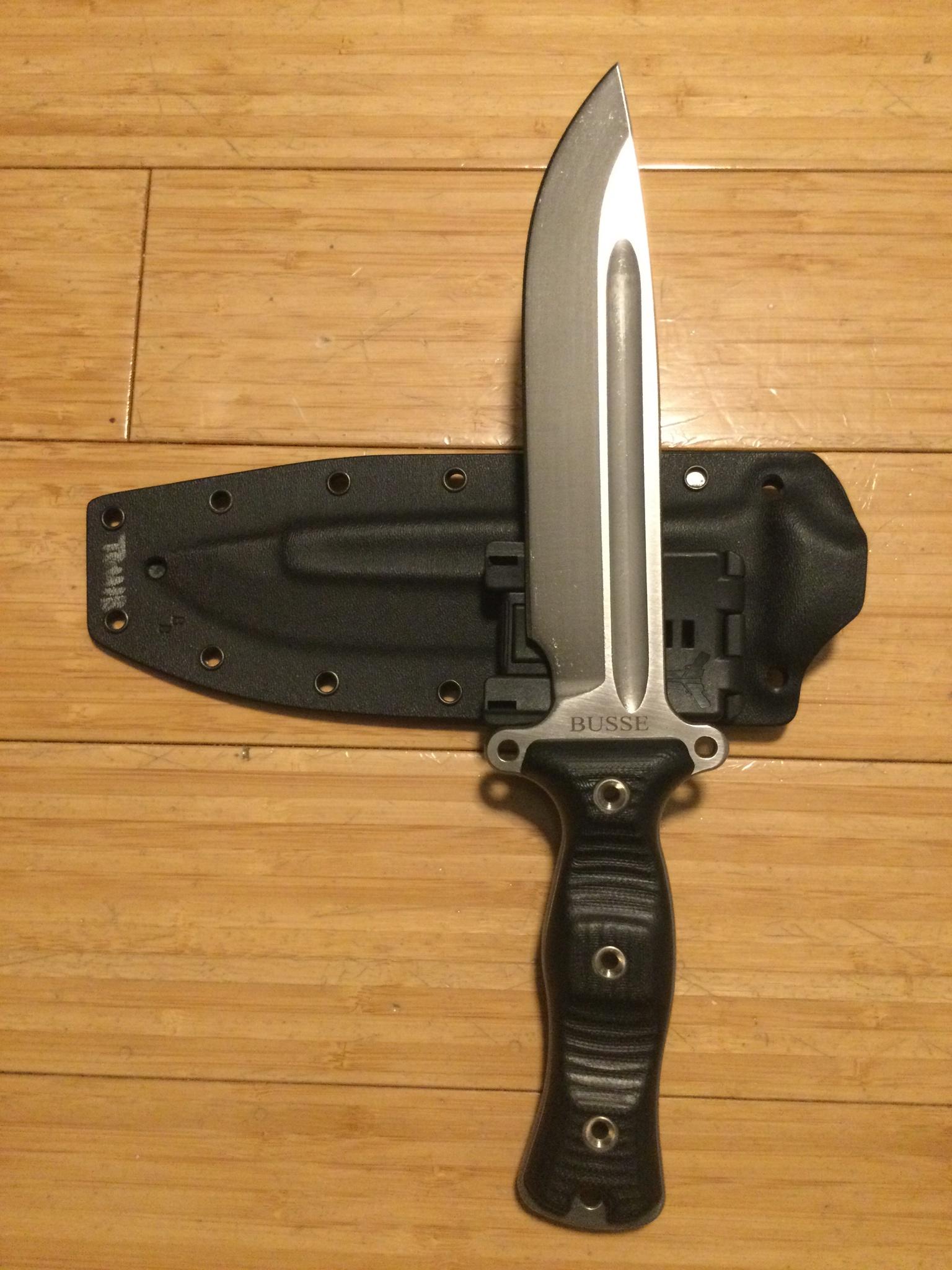 Last, but certainly not least, the FTG. After hearing all about them from me, another best bud of mine has gotten the Busse itch. He’s more into guns than knives, though, and has been building up a respectable reloading setup. As you can imagine, that hobby has tied up all of his “Fun Money”. He hit me up a couple of weeks ago to tell me had been contacted by a close friend that I don’t know. The friend was looking for a knife he could bet his life on, and would last for years. My buddy recommended Busse without hesitation. The friend checked out the website, and immediately fell in love with the HR2. He placed his order shortly after. If anybody deserves a Busse, it’s the guy who believes in the company so much that he refers paying customers to them without even having his own! 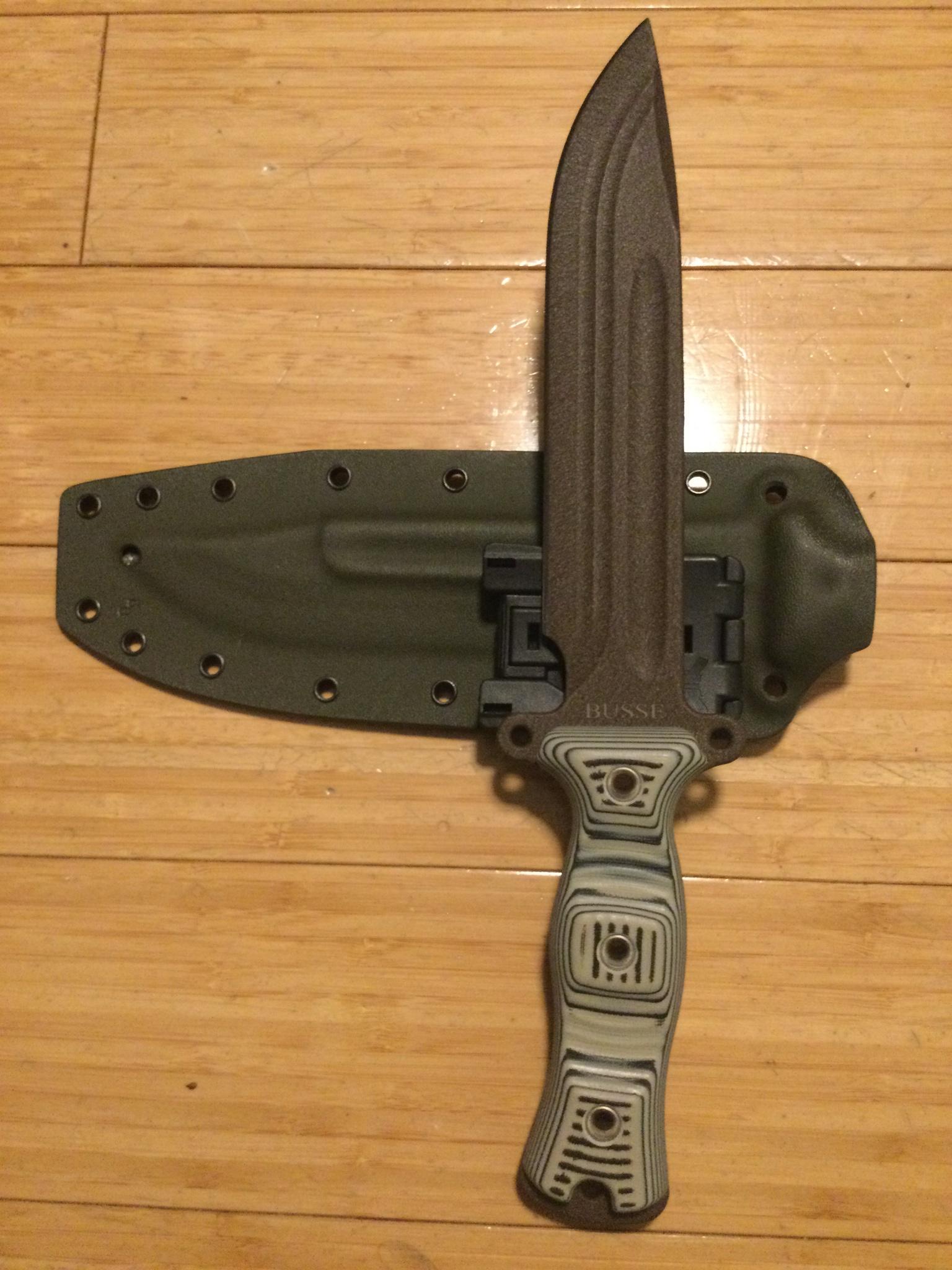 What about you? Are there any other hogs out there giving away the Bacon this year? Who getting what? I want to hear about. While you’re at it, post a picture or two.

Very generous. Hat’s off to you.

tuica said:
Very generous. Hat’s off to you.
Click to expand...

I’m just good at framing. Those succulent strips of bacon had been trying to run away in search of more abusive homes for quite some time.

I gave my dad a Basic 8 this year. He was looking at a $30 knife at the flea market to use when cruising around the 10 acres we recently bought. I told him - no father of mine will be using anything less than INFI. Fortunately, he has no clue on cost or he'd never let it see the light of day.

I've also given my good friend a RMD when he shipped off to the Air National Guard. @Will York chipped in and donated a sheath so he ended up with a full setup. He also works for the Forestry Service as a "real" firefighter so that knife gets put through the ringer as Bussekin should.

I will post pics in the next couple of days.

honorearth said:
I gave my 12 year old daughter my BG SoS that I stripped and customized and my 16 year old son a ruki View attachment 1478393
Click to expand...

How did you get that patina? It's cool.

Currawong said:
How did you get that patina? It's cool.
Click to expand...

honorearth said:
Dabbed on some mustard with my finger and left it over night
Click to expand...

Okay I was expecting something scientific but that's even better.

I’m giving this Forsaken Gemini to a co-worker 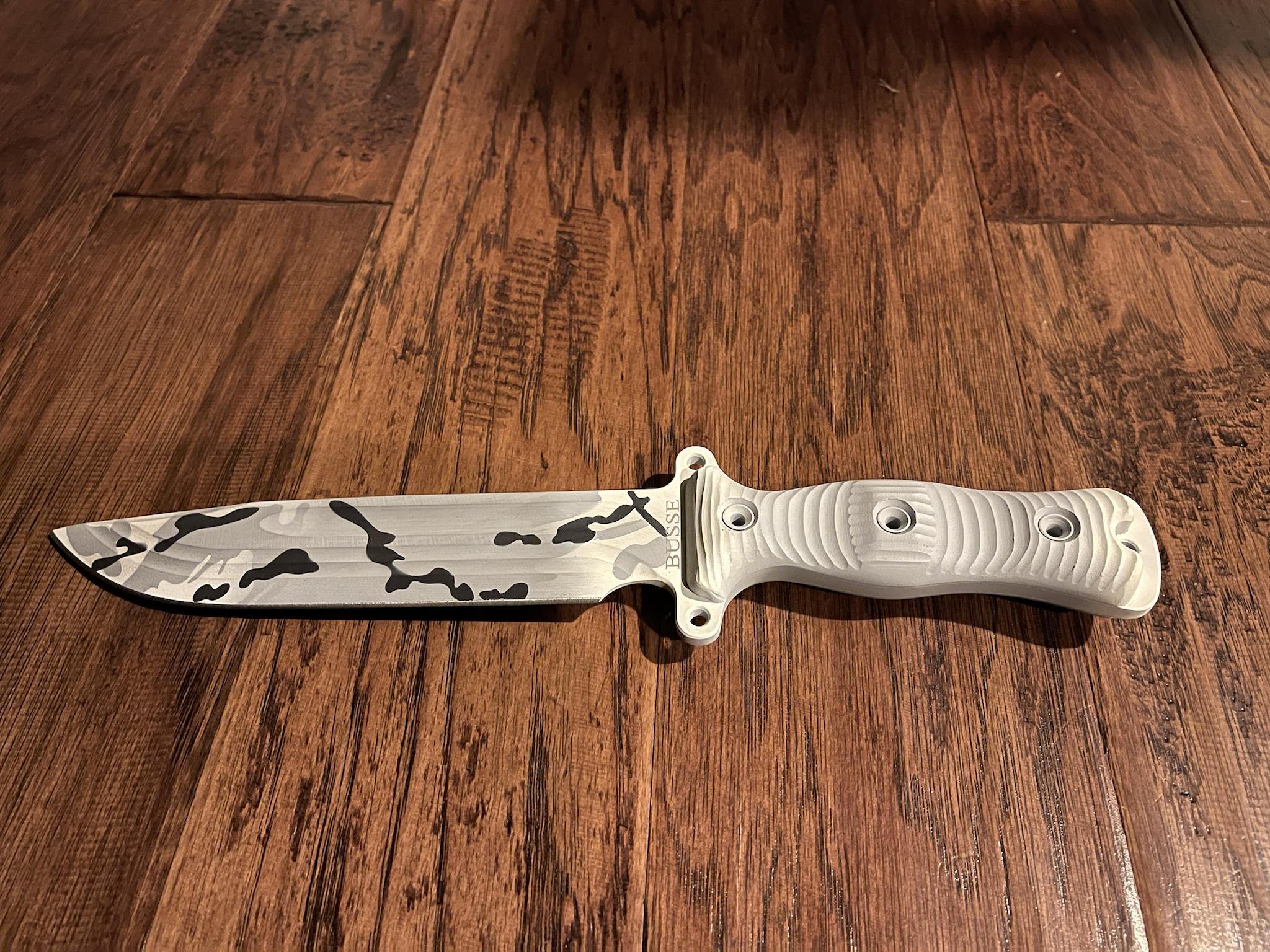 Chris A said:
I’m giving this Forsaken Gemini to a co-worker

Hello, it's me. Your co-worker.

What a coincidence, Im a knife guy but I don't own any INFI, what else you got?

Why can't we be friends?
S

You guys are good people. Remember to give them a penny with the knife so they can “pay” you for it.
I’m not sure if this is a widely followed superstition but it’s a strong tradition in my family. We always include a penny in the gift is a knife. The saying is that a knife given will sever the friendship so we throw the penny in there just in case.

I’ve never heard of the Penny Superstition, but find it interesting. Thanks. I’ve only given relatively inexpensive knives to sons of my brother, and of my best friend. Perhaps something more substantial to follow later.
P

The penny superstition was portrayed in the movie "The Edge" starring Bart the Bear and Anthony Hopkins.

Never heard of the penny, but I have heard of the superstition. I don’t pay it much mind, but if the friend cares, I tell them to give me a dollar. So far, friendships are still intact.

I'd never heard of it either till a friend gave me a silver dime after I gifted him a knife.
Someone else gave me a 1oz silver coin in the same way later on. It's a thing with some folks.

Just yesterday I found a bunch of old pumpkins chopped in half. Apparently he was having his sister toss them to him as he split them.

honorearth said:
Just yesterday I found a bunch of old pumpkins chopped in half. Apparently he was having his sister toss them to him as he split them.
Click to expand...