Briandt3 said:
I wish I wiped her down a bit better before posting a pic, but yea brother this is a badass offering... the spine cut up my cloth while wiping her down
Very pleased
Click to expand...

Hahahaha! That’s cool! She might bite cha! This came out just after the NFNO, I said you gotta be F___ing! Kidding me!! I couldn’t do it
Awesome score man, congratulations!

I cant believe I didnt get in on a nuke.

Damn that harpoon tip is awesome, wish it was still available
K

Time to show the boar toothed version. What a beauty. Why do I have a feeling no one else went for this version? Anyone? 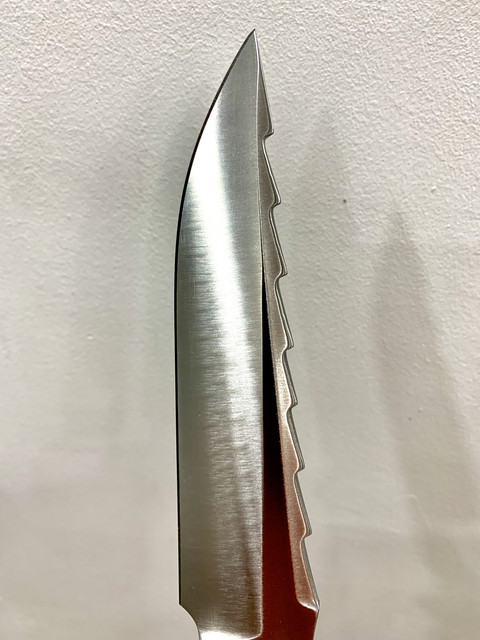 Wow! Now that is really neat!

Super cool!!! Man that thing is got some beautiful lines. Very nice score. Congrats on grabbing that one!

yeaaaaaaah. no one bought any of THESE.

KXAL said:
Time to show the boar toothed version. What a beauty. Why do I have a feeling no one else went for this version? Anyone?

Never seen that before, howćd I miss it? Thanks for the bump Timmy, theres some nice forgotten infi here. We need more boar toothed blades looks like

The Fury line is beautiful and formidable.
That was my first attempted entry into Busse and didn't score anything. Wanted both the Trailing Point and the Boar Tooth (but could only afford one at the time, so I tried for the TP). Eventually did end up with a Combat Grade Urgent Fury from a grab bag and later a Crab Shack from a Ganzaaa.

I hope I get to see some of these in thinner Battle Grade at some point as they would absolutely annihilate some turkeys and roasts!
(Hey, a guy can dream!)

DamascusBowie said:
I cant believe I didnt get in on a nuke.
Click to expand...