The practice of loaning knives

In the late 80s a good friend was going on a trip to explore Costa Rican rainforests. He needed a knife for the trip and asked to borrow one. I gave him my Buck 501 to use. Two weeks later I got the leather case back but the knife was stolen when his luggage was checked at MIA. MIA...how appropriate. He apologized and I shrugged it off and that was that. About twenty years later I unexpectedly got a package from this same friend who is now a doctor in Las Vegas. In the package was a very nice letter recounting the events of the knife being lost and it emphasized how I didn't make a big deal over the loss. The package included TWO knives: the same vintage Buck 501 (old English type lettering) and a Benchmade Emissary, as a bonus. I'd say he made good.
J

killgar said:
I can think of several situations where I would lend a knife-

I'm a "knife person", but on a few occasions in my life I have forgotten to take a knife with me when going out. Even a lifelong "knife person" can forget. If I forgot to take a knife and needed to cut something, I would certainly appreciate it if someone were willing to lend me one. So I'd do the same for others.

If someone flew in to visit me from out of town and didn't want to check a bag just to bring a knife, I would lend them one while they were here.

If a friend and I were working on something together and my knife were better suited for a task than his knife, or he didn't have one, I would lend him one of mine.

If I were on on a hunting/fishing/camping trip with a friend or family member and they misplaced their knife, I'd lend them one of mine.

I was on a date and the woman asked if I had a knife she could borrow to cut one of those plastic string tag holders off her jacket sleeve. I offered to cut it for her, but she said she could do it. So I lent her the little pocket knife I was carrying. She said that she normally carried her own but she forgot it. It was in her regular-carry purse, and she was carrying her date purse.

And then there are emergency situations-

I've seen car wrecks where a person was trapped by their seat belt and random people who gathered to help, and even first responders didn't have a suitable tool to cut the person loose, and called out for a knife. In such a situation I wouldn't hesitate to hand over a knife. I certainly wouldn't insist that everyone move aside and let me do the cutting.

If someone were actively engaged in trying to save someone's life and needed a knife, I'd hand over my knife, even if it were my most prized possession.

As far as non-knife people-

If I didn't know how someone might treat a knife, and if I had a knife that I didn't care about, I'd lend it to them. Meh, why not.

Although I believe in owning and carrying knives, I don't hold it against other people if they don't. At the very least, if a person recognizes the value of a cutting tool enough to ask to borrow one (rather than using their teeth, house key, etc), that's something I can respect. And depending on what they wanted it for, and the knives I had available, I might be open to lending them one.

Of course, I would never loan, or even let a person handle one of my knives if I thought they might do something stupid with it that could cause harm to them, myself, or others.
Click to expand...

This should be like the 10 commandments of knives and the relationship with its.owner..

Depends. I have given a few away, although they insisted on paying. One of the guys covered a tip for me at a restaurant, so I considered that paid. The other gave me $10. The first one was a Kershaw Cryo. The new owner had used and abused it, broke the tip, but it was still going until the TSA confiscated it. Second one was a Cryo II, again used and abused, tip broken. He still has it though, with a reground blade (it is now a Sheepsfoot haha!) Gave him a choice of another knife and he got my Artisan Tradition. I felt good about the exchanges, but I wouldn't loan either of them a Spyderco of Hinderer...

I did recently loan one of the guys at work my Shaman. He usually carries a Leek, but didn't have it on him and needed to strip a cable. He remarked at how sharp it was, but used it and gave it back with no issue. I wouldn't mind loaning him a more expensive knife. I believe he would take care of it.

If I don't know you? Not a chance. Especially if you don't understand why I would carry a knife in the first place.
B

I don't loan my tools out.

I like "let me borrow your knife" when you know they intend to pry with it or use as a screwdriver.I cringe....

I can't remember ever loaning anything and getting it either 1) "Returned" or in 2) "In good condition" if returned. So I stopped "loaning" anything a long time ago.

Better to just give it away than expect ever getting it back.

I know I'm in the minority, but I only own and carry "users". Mostly of the cheaper variety and I always warn" .....dont cut yourself". So with that disclaimer I feel that the borower is in charge of safety issues for themselves. My edges are only "working sharp" at any rate and so if it comes back used as a screwdriver or prybar I will take care of it during the next session with a stone. Even I usually ask what needs to be cut and can then decide to hand over my multitool with the apropriate tool already opened vs strickly a blade. I am suprised at the number of times even reasonably intelligent people return with the unit gingerly held out and admit that they cant figure out "how to close this thing". It seems to me that a cursary look would spot a liner lock, but thinking it out for yourself seems to be a lost art in todays world.
D

braillediver said:
I can't remember ever loaning anything and getting it either 1) "Returned" or in 2) "In good condition" if returned. So I stopped "loaning" anything a long time ago.

Better to just give it away than expect ever getting it back.
Click to expand...

One of my friends is a bodyman I loaned him my truck and he had it for a month. It came back with body work I had been meaning to get done for a year done for free, without mentioning it.
O

eveled said:
The few people I would loan a knife too, I would just give it to them.
Click to expand...

Agreed. If it was someone who I'd consider loaning a knife to long-term, I'd rather just gift them a knife.
L

Last year I loaned a handmade knife I bought off here to my buddy's son for an elk hunt in NM. Ain't seen it since. I've seen his son a few times but he's never mentioned returning the knife and I figure since his father is a dear friend I'll just let it go. I figure he thinks I gave it to him so I'll just chalk it up to experience about lending knives etc. Bottom line is that I'm good with it. I have mellowed in my old age and friendship is way more important to me than the knife. stay safe

I carry a thick, beater little fixed blade with a super obtuse tango tip with me pretty much all the time. That’s what I lend out if necessary since it would be hard to damage even if you pry with it. I keep the good folders for myself to use only.

This is why I keep a utility knife around with extra blades. If they break it or lose it I haven’t lost much. No, I don’t generally loan my good knives to just anyone and not for long.

longbow said:
Last year I loaned a handmade knife I bought off here to my buddy's son for an elk hunt in NM. Ain't seen it since. I've seen his son a few times but he's never mentioned returning the knife and I figure since his father is a dear friend I'll just let it go. I figure he thinks I gave it to him so I'll just chalk it up to experience about lending knives etc. Bottom line is that I'm good with it. I have mellowed in my old age and friendship is way more important to me than the knife. stay safe
Click to expand...

Not me. I would ask him where my knife is. And if I determined after our conversation that he was a decent person and he really loved the knife, then I would give it to him. That way his conscience would be clean and we would have a more healthy relationship - and he wouldn't try to avoid me.
A

I normally don’t mind loaning or letting someone look at a knife, but I have had some rather annoying experiences doing so. Someone at work wanted to look at a Benchmade Griptilian I had one day. I handed it to him, then another coworker wanted to see it, when he was finished, instead of bringing it to me, he tossed it to me from about 8 feet away. When someone told him that it was a $100 knife, he said “I don’t care, it isn’t mine”. I learned that day, that you had better be selective of who you hand you personal property to.
Last edited: Mar 5, 2021

Alberta Ed said:
Never loan your knife; 99.999999% of people who need to borrow a knife have no idea how to use it properly.
Click to expand...

Truth. I sent a box early this winter, as a surprise to a buddy who shoots and skins Coyotes further north. And who usually gets a deer in the fall. He got 5-6 various Moras along with a thin bladed old Erickson for finer work. I reordered a blaze orange CS Finn Wolf folder as I also sent my original to him, in the box. Kind of a chest pocket knife. I didn't even have to buy them, as I had such a ridiculous pile of Mora's. WARNING (not you Ed)......... to any that that can't handle harvested animal pictures. Buddy popped the deer in the heart in pic below. 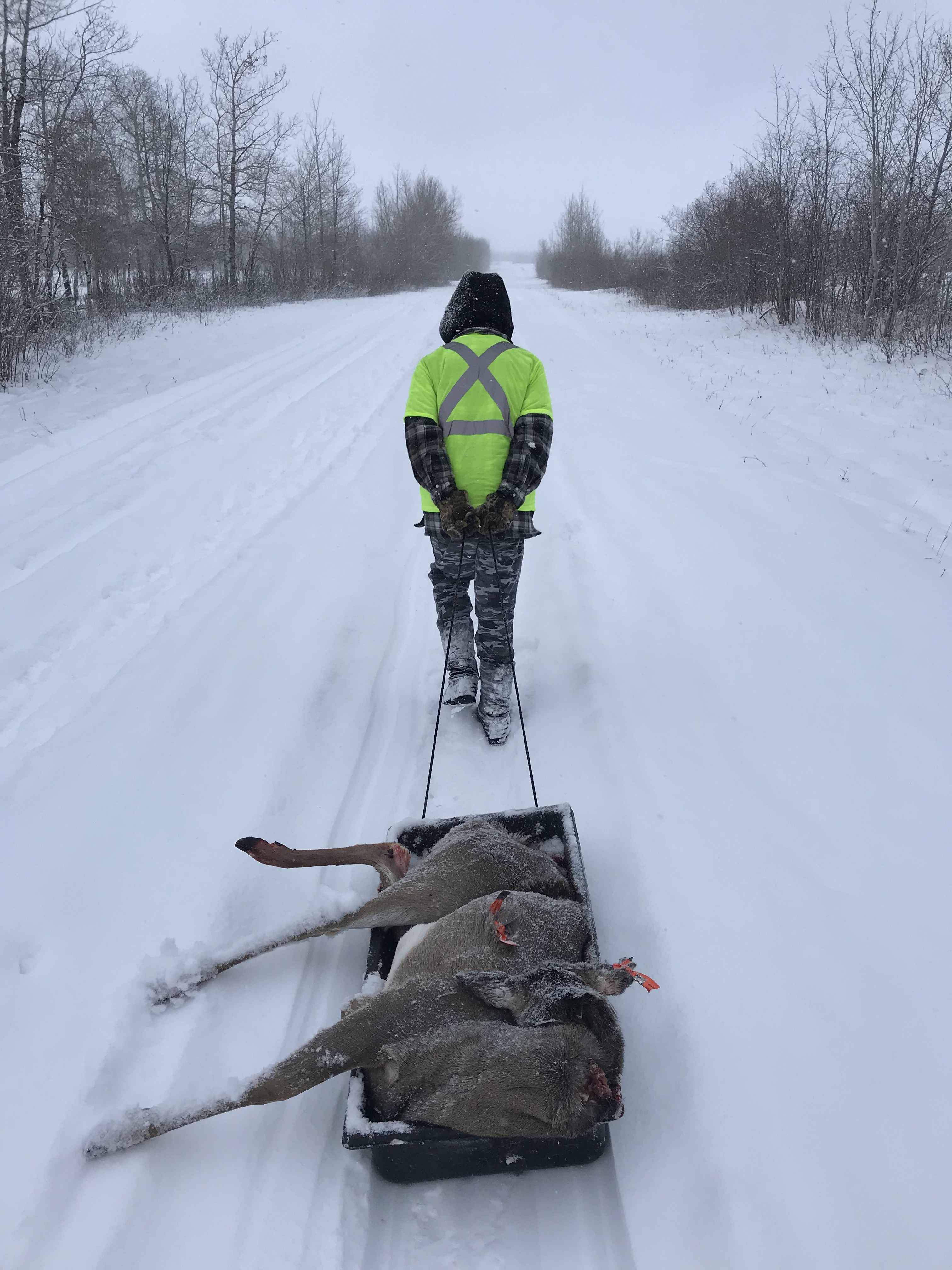 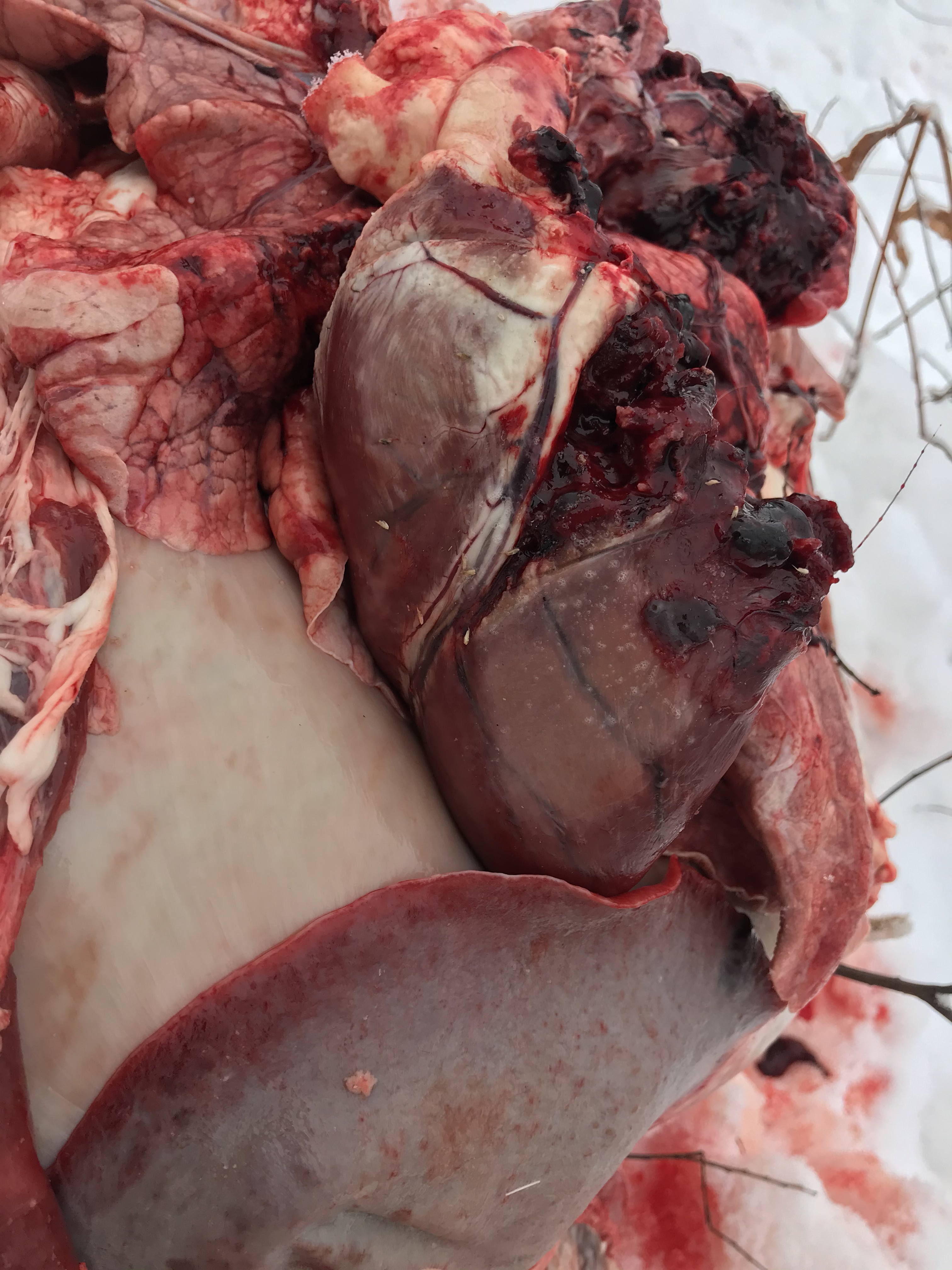 Nope, I won't loan a knife. Anyone I trust enough to use one safely/properly already has one.
B