The Swords of HI

I have found reference to HI making a Wajaski short sword. I have not found any photos however. A 26" sword at 22 oz. sounds like a lively blade. Does anyone have any pics of Wajaski's? Thanks!
H

I am just getting into WMA, so don't want to pose as an expert. But I ask myself, Why would we say that edge-on-edge is a Hollywood invention? As John Clements says, it's because in real combat you are trying to kill the man in front of you, not play patty-cake to keep the crowd interested. Thus, one's main purpose would not be to aim at hitting their blade--it would to aim at hitting them! However, clearly one's opponent would prefer not to be killed, so they might shift out of the way, block with a shield (if during that period, mainly before plate armor became popular), move in close to grapple, or block with their sword, preferably the side of the blade rather than the edge, but the edge if that's all I could do--not as a way of entertaining the crowd but as a way of not dieing. Would I use my edge rather than die? Yes.

I am most interested in the 11th-13th century Norman era. I have an original size and weight (for approx 12th century) reproduction that is made for metal-on-metal, so not only is it unsharpened but it is rounded at the edge and really can't be sharpened. It won't cut much, but it will generate plenty of blunt force trauma. . . .
S

Seeing this post reminds me I haven't seen Danny in Japan on here in a long time. I knew that he was having some health problems. Any news?
S

Good News! I had a conversation the other day with Yangdu about a Wajaski, and here is her reply:
"I will put the Kamis to put work on light weight Wajaski Sword.
In old days the Wajaski swords are very popular among HI knife and sword collectors,
Thnak you for bringing this up for Kamis new project."
S

steeldust said:
I have found reference to HI making a Wajaski short sword. I have not found any photos however. A 26" sword at 22 oz. sounds like a lively blade. Does anyone have any pics of Wajaski's? Thanks!
Click to expand...

From a previous thread:


"WAJASKI SWORD"
"Our playfully mispronounced (but well-crafted) HI version of the Japanese, wakizashi,
this is the natural companion to the HI Katana." 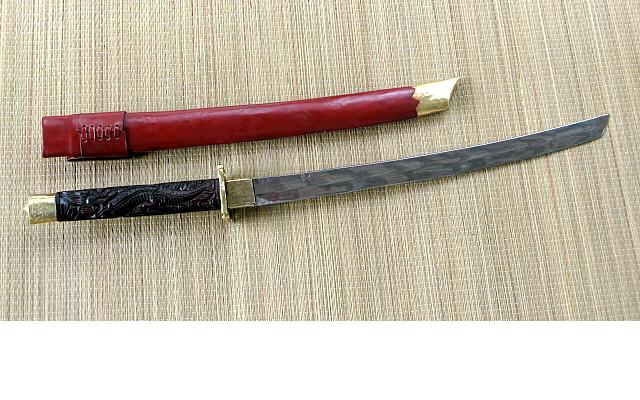 Thank You Steve Tall for the PDF link!
D

steeldust said:
Thank You Steve Tall for the PDF link!
Click to expand...