Do Beckerheads only use Becker knives?

LukeTheSpook said:
Then I got into handmade and customs: big Chris, jk, set, Gossman.
Click to expand...

Do you miss not having supersteels though?

Jonny1280 said:
I love all my Beckers dearly, especially my BK11. But life's too short to stick with one brand.
Click to expand...

These two guys pretty much said it all. Being on BladeForums itself is indicative of a general enthusiasm for knives and though I have been a longtime fan and advocate for Becker knives, I don't limit myself. There are so many wonderful sharp pointy pieces of metal out there, designed by skilled and innovative folks, it would be quite silly not to have an appreciation for them all.

Esee, Ontario, Condor, Mora, Buck, Ka-Bar, Jericho, Fallkniven, etc. There is so much out there to love, use, and appreciate. I would probably love a Busse too if given the opportunity, I just can never justify paying up t0 6 times the cost of a Becker... So stinking expensive. However, folks love them for a reason and I imagine that they are pretty spectacular knives.

I joined the forums specifically due to my Becker fanboy ways, but I quickly found there is a lot more to explore and enjoy here and I've learned quite a bit about other makers that I either was not aware of or knew about and just had not experienced them yet.

Dr Rez said:
Do you miss not having supersteels though?
Click to expand...

No. I firmly believe the appeal of super steels is NOT with the performance but with the hype and marketing. I still have the 3V, 10V, delta and all those. My LT wright knives are in A2 and 3V. They perform the same. I even have the same gns in 01 and 3v. Same. I've ran whole arena with chasing super steels and I'm done.

Even my Finnish knives that have whatever carbon steel (I don't even know) perform amazing.

Please note, those makers using super steels still make amazing knives and are well worth their price tag if that's your thing. They've just basically priced me out, for my needs.

LukeTheSpook said:
No. I firmly believe the appeal of super steels is NOT with the performance but with the hype and marketing. I still have the 3V, 10V, delta and all those. My LT wright knives are in A2 and 3V. They perform the same. I even have the same gns in 01 and 3v. Same. I've ran whole arena with chasing super steels and I'm done.

Even my Finnish knives that have whatever carbon steel (I don't even know) perform amazing.

Please note, those makers using super steels still make amazing knives and are well worth their price tag if that's your thing. They've just basically priced me out, for my needs.
Click to expand...

Nicely said. I do think there will always be debates regarding the properties of super steels and their merits in everyday use. Some folks just have to have what they perceive to be the best steel available, which in most cases is a rather subjective target. I would say in the majority of cases, super steel fans will never use their knives in a manner that really puts its integrity to the test, especially when it comes to folders. They are just too expensive to warrant the kind of use and abuse that a super steel is designed and marketed for.

As with just about anything these days, knife enthusiasts have their own brand of nerdery, usually surrounding various steels, construction methods, designers, and makers. I used to get caught up in the hype of metallurgical superiority and then just simply found that my wallet could not keep up. I have one blade in 230v, a ZT 0301. I skinned an elk with it and I have to say that it kept its edge longer than any of the knives my buddies were using. A testament to its performance, I would say. The trade off being that it took more time and effort to sharpen, its recurve only compounding the issue, where my buddies could whip out a stone and get their blades touched up rather quickly.

At the end of the day though, it comes down to what you like, prioritize, and believe in. If you are partial to a particular steel and can afford it, no should be able to say you can't buy said knife. However, on the flip side, I would say anyone who limits themselves to just a certain class of steels is literally limiting themselves, and not in a good way.

It always amazes me when I read about folks who prefer certain super steels to other super steels. Not because I don't believe them, I just find it interesting that the differences in performance are that noticeable. It is one thing to see a difference in 1095 and 230v, quite another when its between A2 and 3V. But again, like with any sort of nerdery, the devil is most definitely in the details...

Besides Becker's, I like and use CPK (Nathan knives), Battlehorse, Bark River, Busse, and Buck. I like using various steels, and for various tasks... Keeps it fun and something always to learn.

Brian77 said:
Besides Becker's, I like and use CPK (Nathan knives), Battlehorse, Bark River, Busse, and Buck. I like using various steels, and for various tasks... Keeps it fun and something always to learn.
Click to expand...

What do you typically carry into the woods?

I don't know if Maxamet is a super steel or not, but it surely is in my eyes. My wife bought me a Manix 2 in Maxamet this past Christmas and I've been using it at work since then. I haven't had to take it to a stone yet, only stropping and it always comes back to that extreme level of sharpness everyone loves. In my folders, I prefer a harder, higher rockwell steel, as they will not see any kind of impact forces, only vertical cutting force. Now when I go play in the woods, it's fixed blades in a carbon steel of some flavor. I love the carbon steels for my woods knives as they are easy to touch back up to sharp with just simple stones. Not the same for my work folders with the harder steels though, which require a little longer sharpening times. That's ok too, because sharpening puts me in a state of zen sometimes!

I also love my Mora blades! 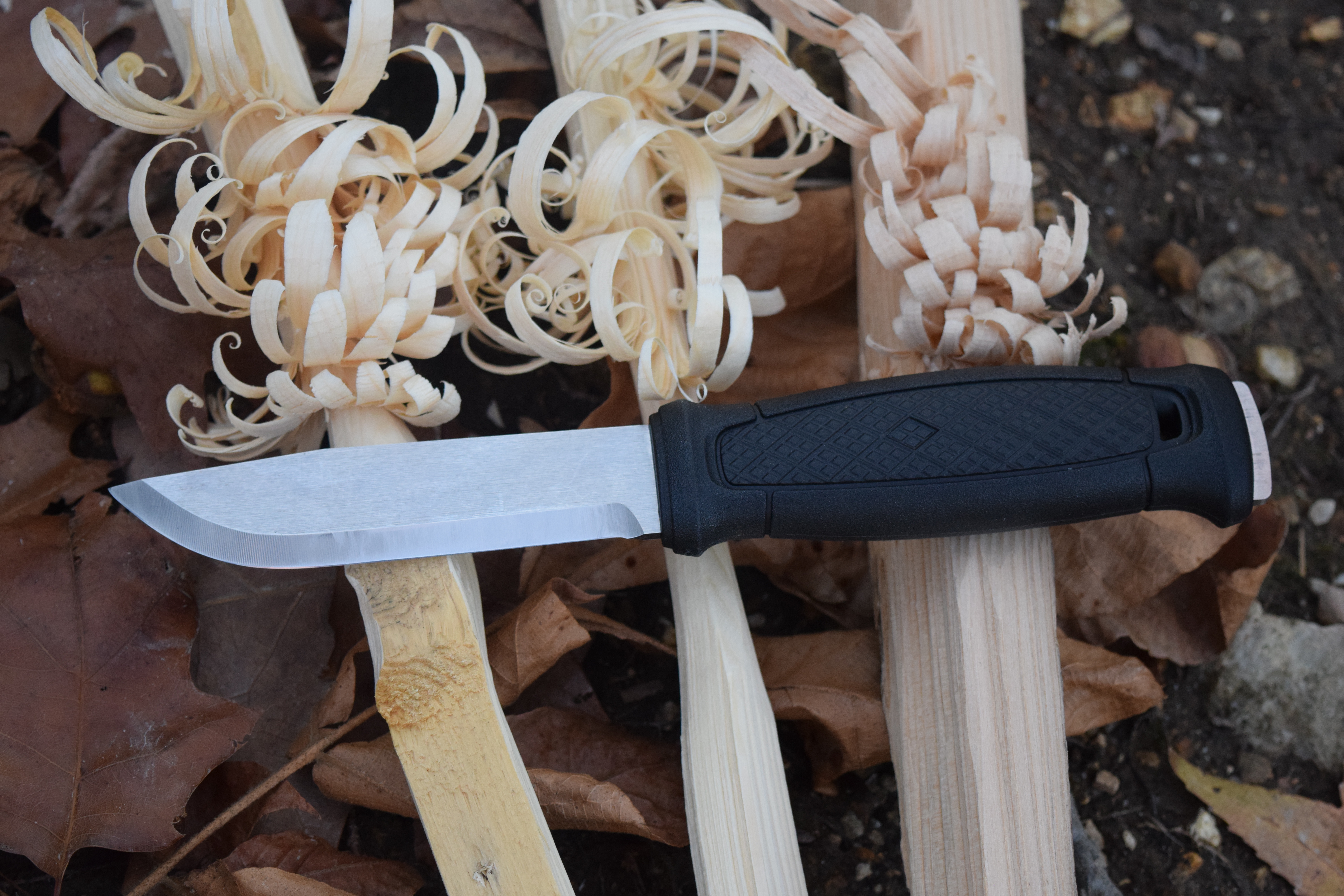 I certainty have to agree. My blaze orange mora companion hangs on my upland bird vest. I bought the rivets and installed them on my gear. Now I just snap on the sheath and it swivels for easy access. Right on my left harness.

I've been using other brands of knives since long before Ethan made his first knife.

I use Kabars, Westerns, Ontarios and Bucks, along with Beckers of all flavors on a daily/weekly basis.

As to the "supersteel hype", I have never bought a knife based on the steel type, only based on looks, feel and handling/performance. In fact, as I type this, I can think of only 2 S30Vs that I have bought and a few D2s out of 3500+. Everything else has been "standard" "high carbon".

My EDC is my beloved 14. I've tried dozen others, but the 14 has a way of sneaking back into my pocket all the time, doing all the daily chores without complaining. My small outdoor knife is my 17, it's always there, doing it all. My 7 is the "big gun" if there's some heavier work to do...

The only Becker Model I miss is a mid sized scandi, here I use a Terävä 110. (Well I could really really do with a 16 sized scandi!!!)

I do have other knives, but the ergos and the blade shapes of the Beckers are so good, (I even arranged myself with the tiny bit too short handle of the 14) that I just come back to them.

The 1095 works good for me, I just don't see the point in a steel that's hard to sharpen, if you are out in the woods...

So maybe I'm a fanboy, but I judge a knife from it's usability and what I call "willingness to work" and up until now I haven't found an equivalent...

I use LT Wright, blind horse, TM Hunt, kabar, mora, buck, and a few others. I don't always use beckers, but I could. If i had to pick just one brand to use forever it would be becker.

Nah, we all swing with other knives.
I have a collection of folders I rotate for office EDC. And when I go camping I have a couple of puukkos I use and a LT Wright GNS Scandi.

Thanks everybody for your continuing comments. It's interesting to see the variety of blades everybody carries. The common denominator is Ethans designs.

i am like most of the people here. I have 8 beckers right now but I have many other brands as well. some just because I like the way they look.
I have a few that are many hundreds of dollars. the truth is that you pay those high prices for not only what you get in the knives themselves,
but sometimes you pay several hundred percent premium just to have a famous maker name on the blade. for all practical uses....
beckers are great for almost anything we need knives for without the designer name premium. and just as a thought.... I love to mod
my beckers just because I can.

And I love me some Manix 2s 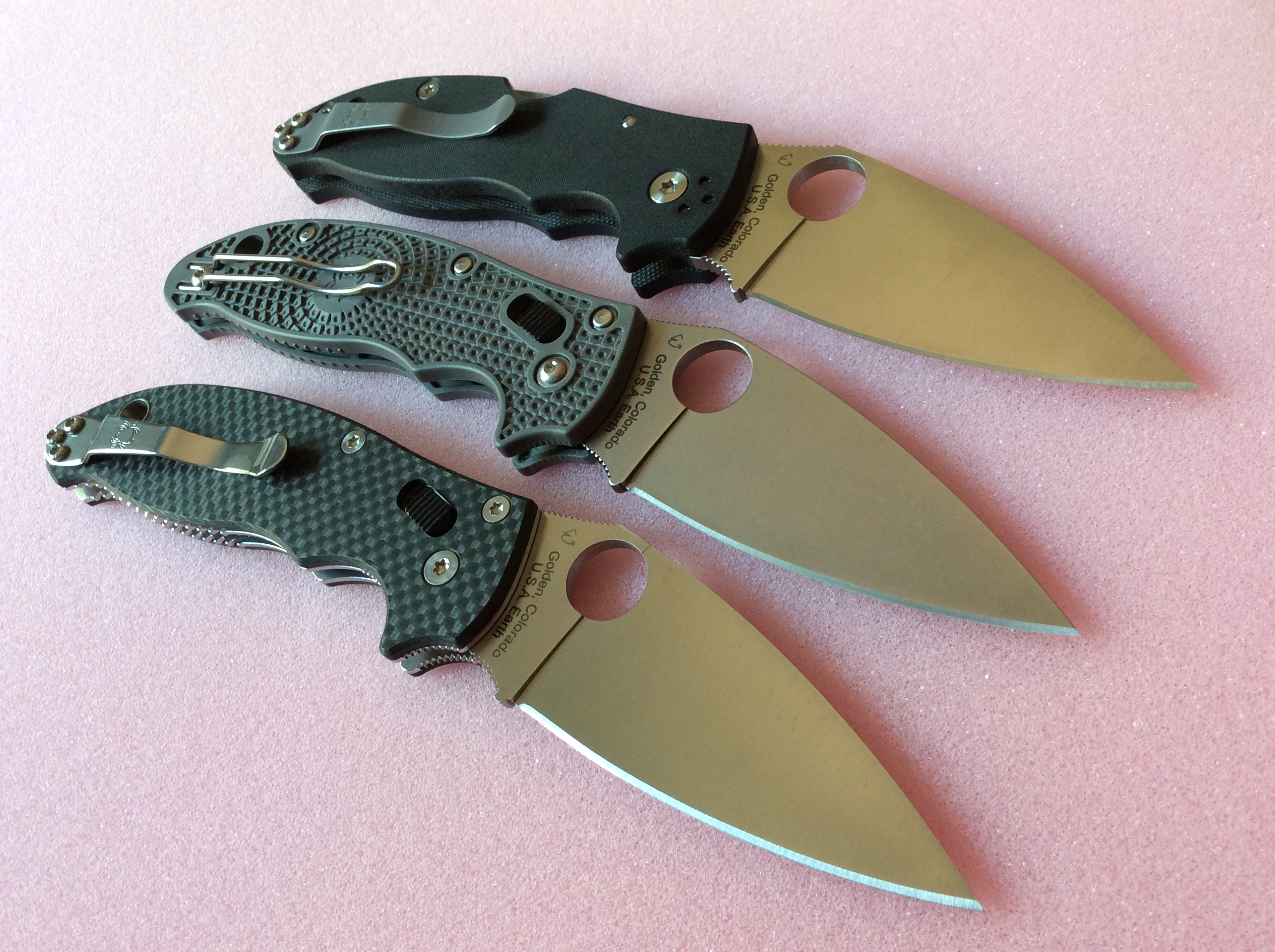 You have owned 3,500+ knives?? My goodness, congratulations!

Rebel Nimrod said:
You have owned 3,500+ knives?? My goodness, congratulations!
Click to expand...

I love my Beckers, but from a practical standpoint, they are just in the rotation with ESEEs, Moras, Spydercos, etc...

I have some customs, some semi-customs, some Bark Rivers, Esee, Spyderco, Benchmade, Kabar, Spartan, a few Versteeg Blades, a few Rock-n-Roll Knife and tool and a few others. I'm not sure what my next purchase is going to be, I'm torn between a few of them.
You must log in or register to reply here.
Share:
Facebook Twitter Reddit Pinterest Tumblr WhatsApp Email Share Link
Top
Change Ad Consent Do not sell my data