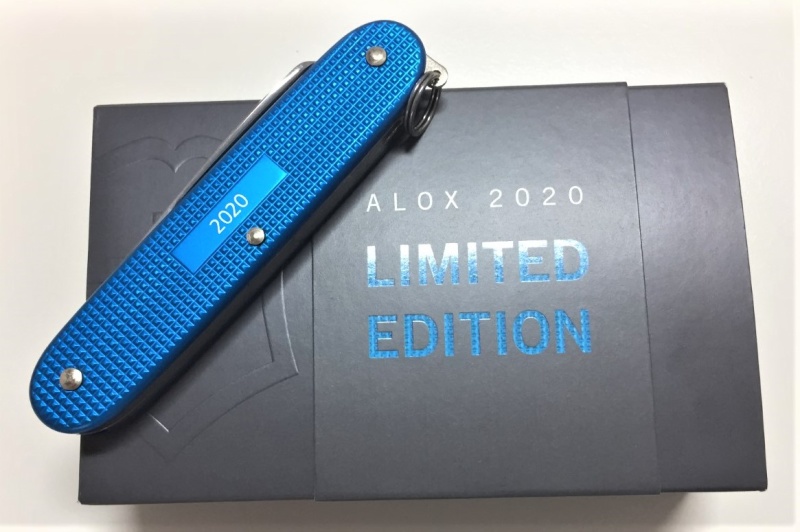 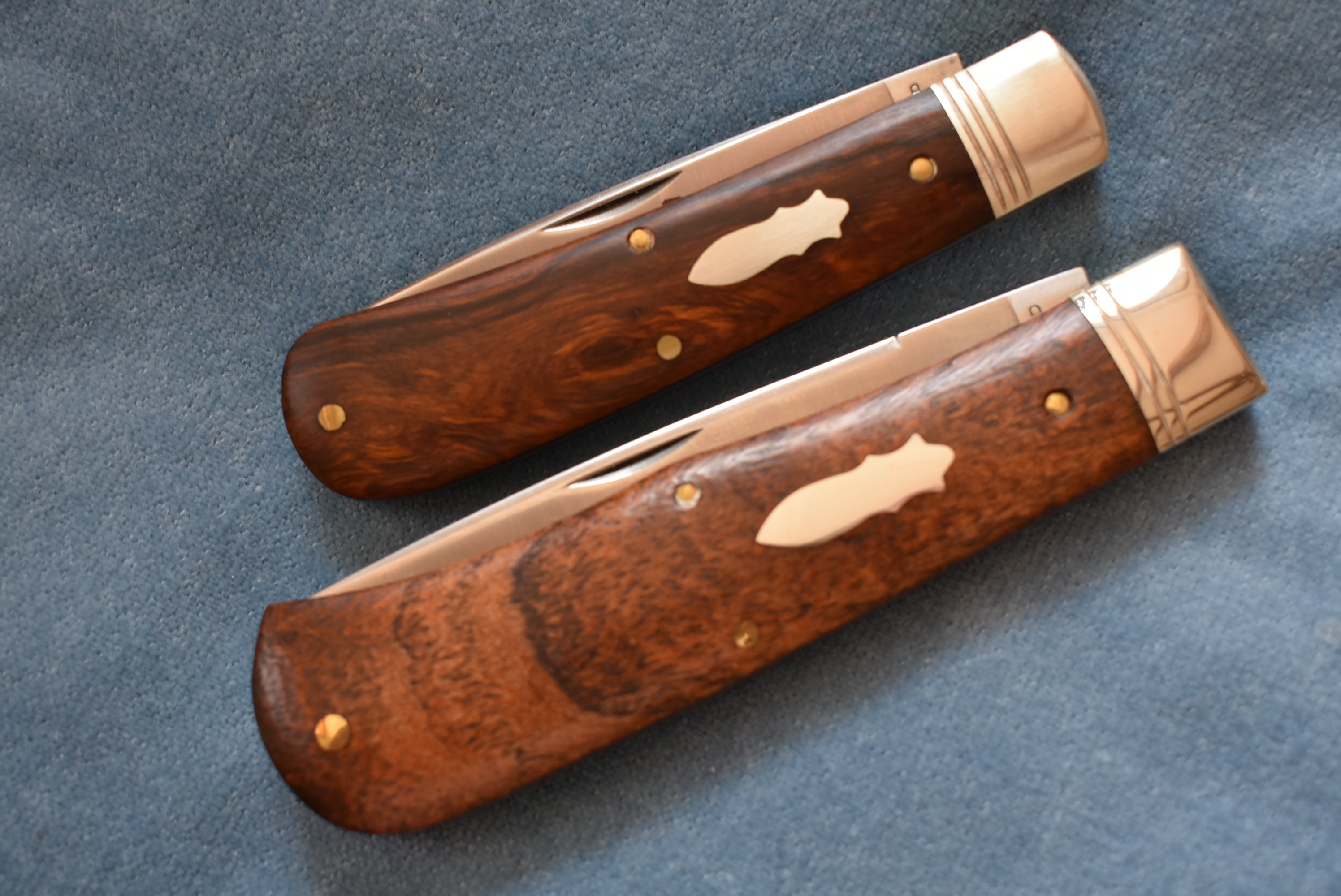 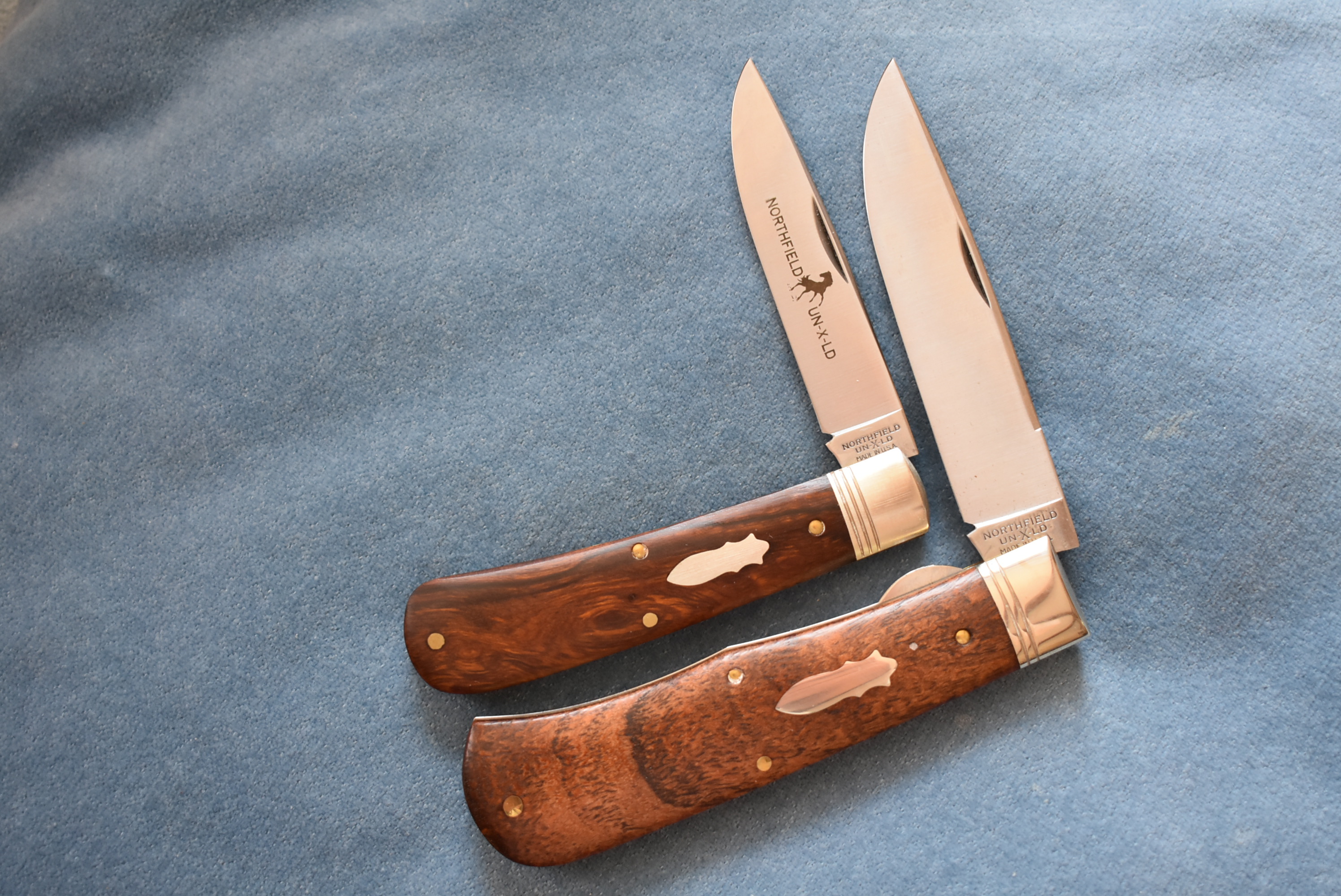 That jigging and color, brilliant. Case just do it so well..

@btb01 I hear you about the spreader knives Barrett Preferably fixed 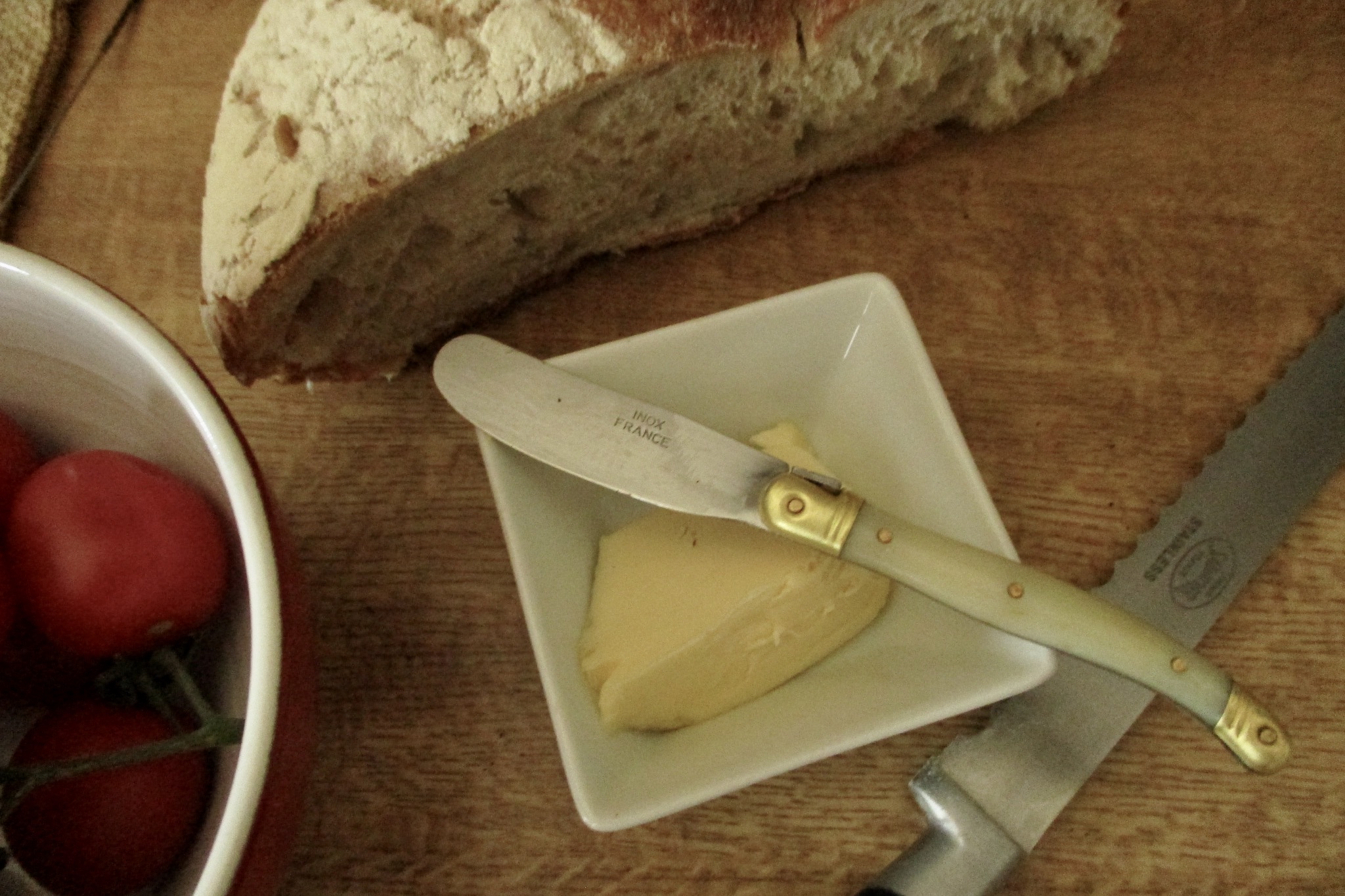 And Brie should NOT be spread anyway but CUT in slabs...... 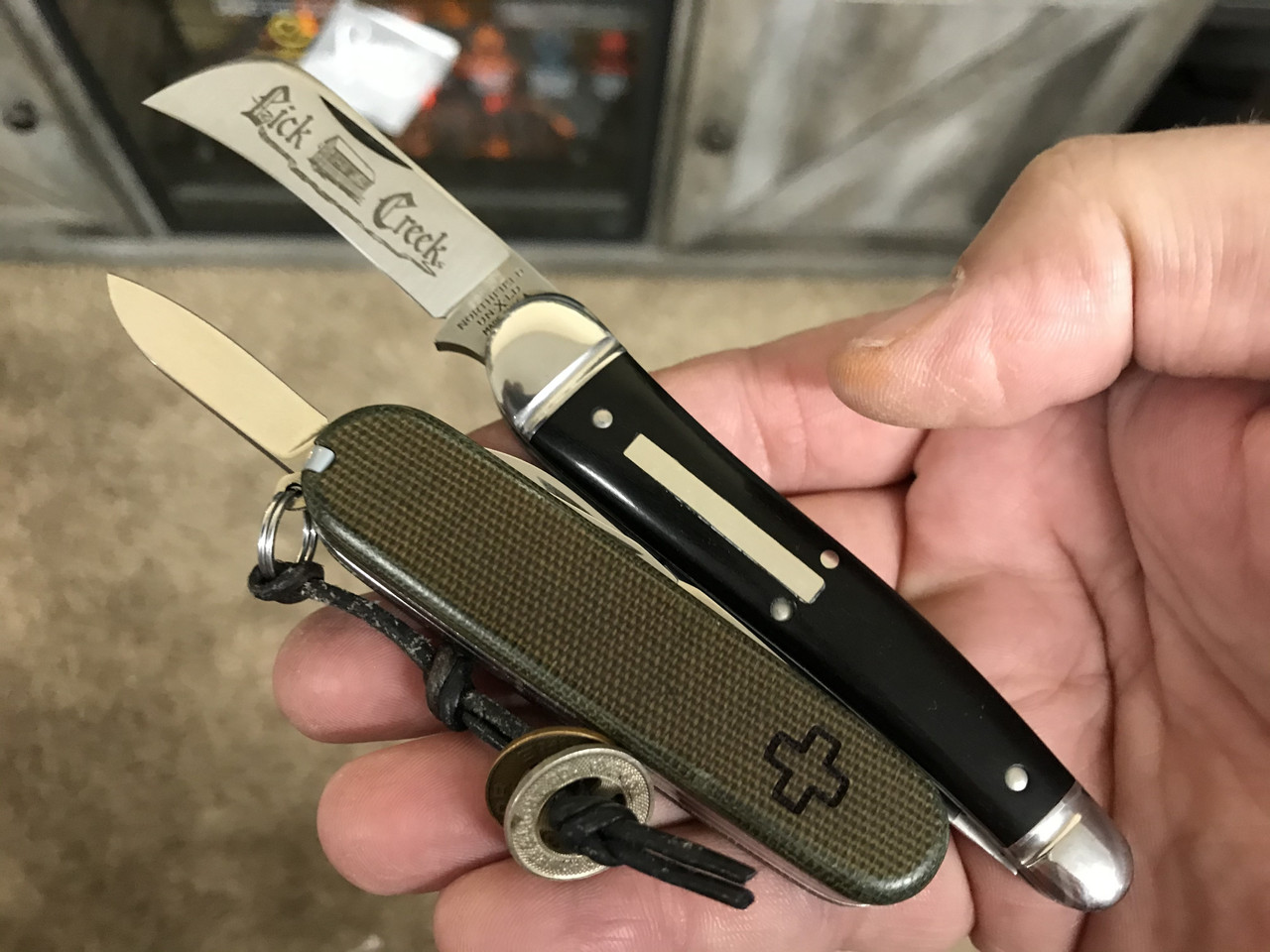 Wow, that Lick Creek looks like it just rolled out of the factory.

Another evening, another fave

Have a safe one all.
S 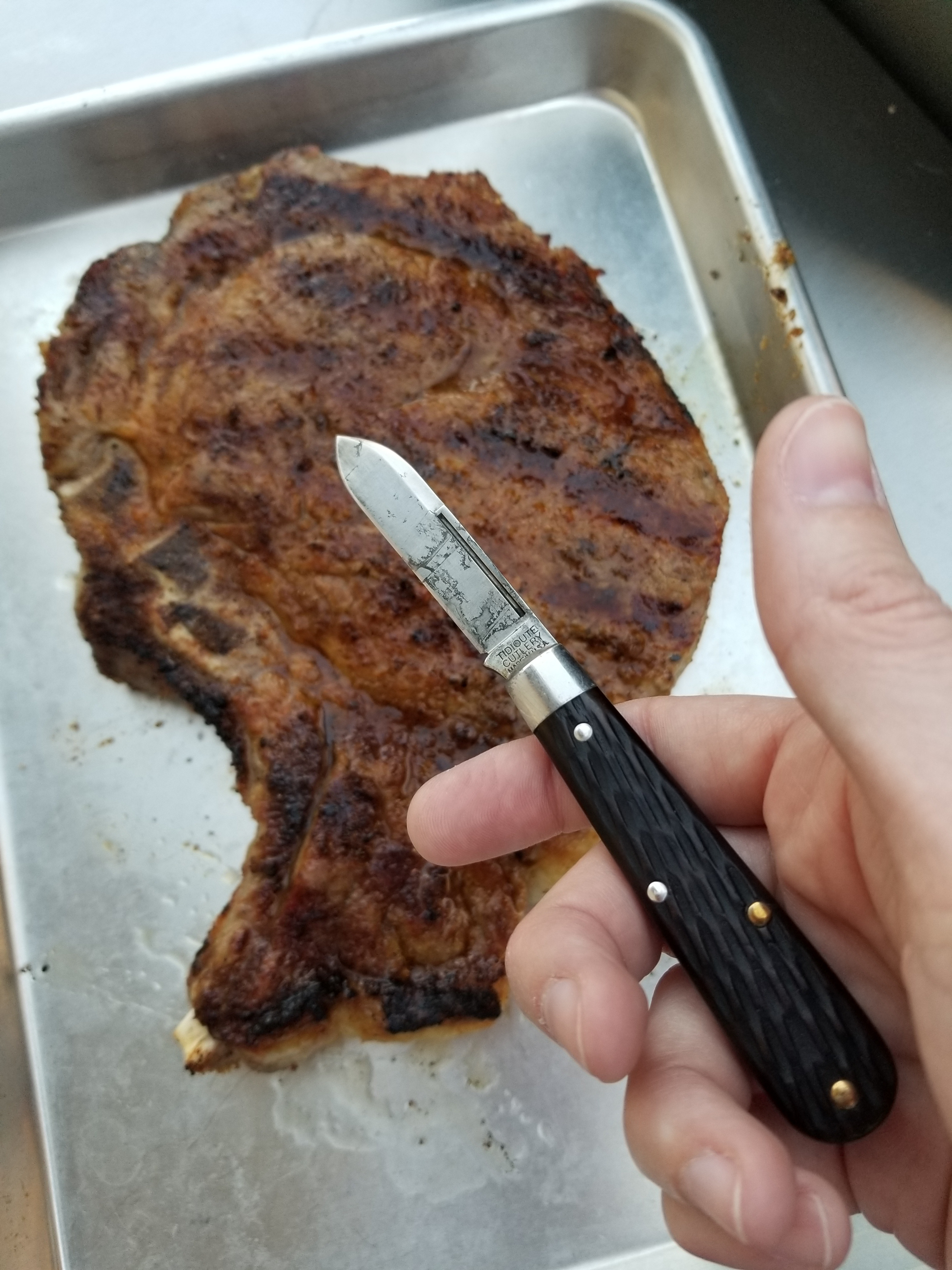 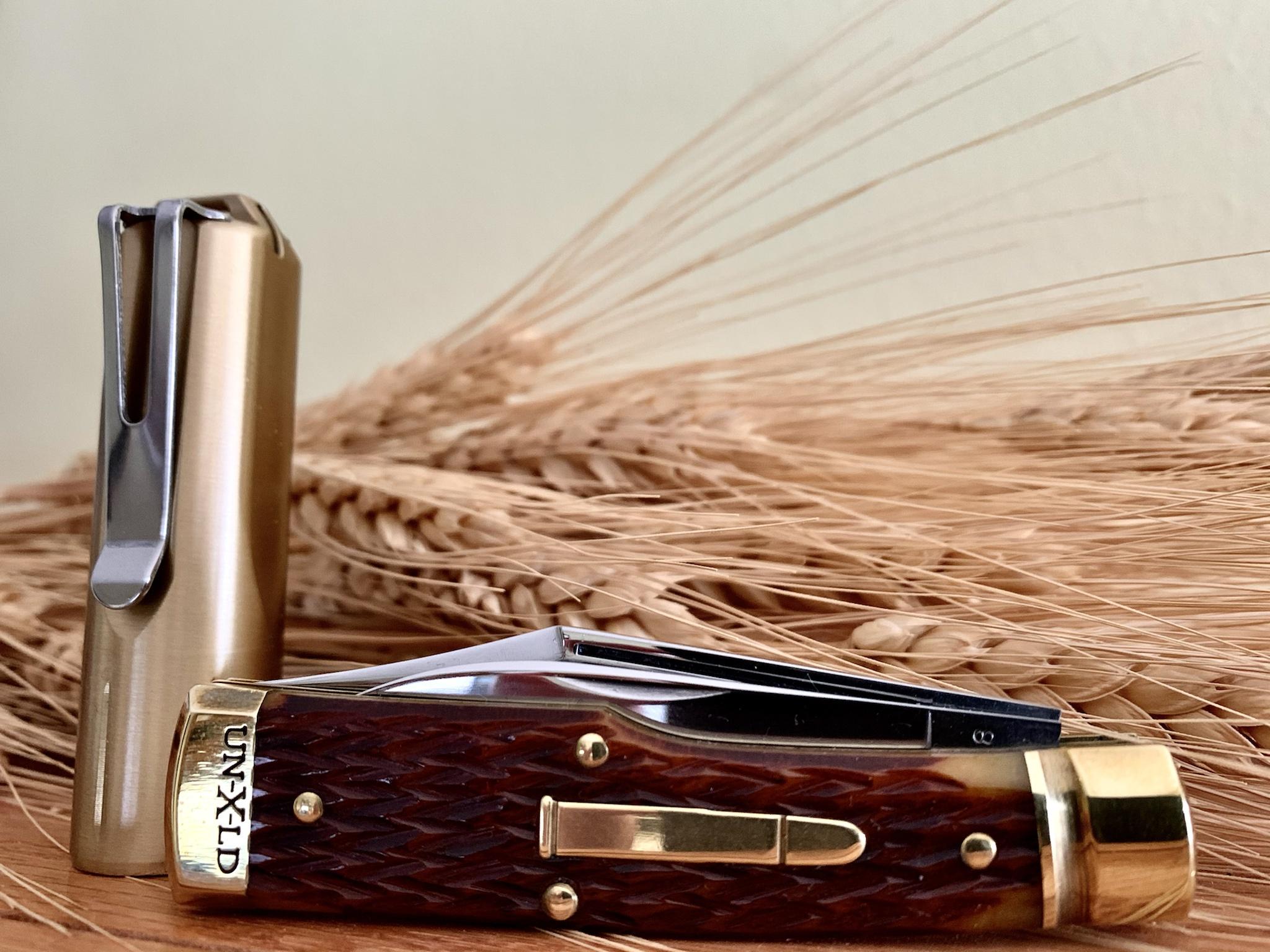 At first glance (and without zooming in) that looked like a Waynorth tang stamp on that Lambsfoot! (Not that that would make any sense, but that’s what I saw.)

Good to see your Unicorn Ivory #25. Been a while since I carried mine, so I swapped out my 2020 BF Viper I’ve been carrying for it this afternoon. (Old photo.) 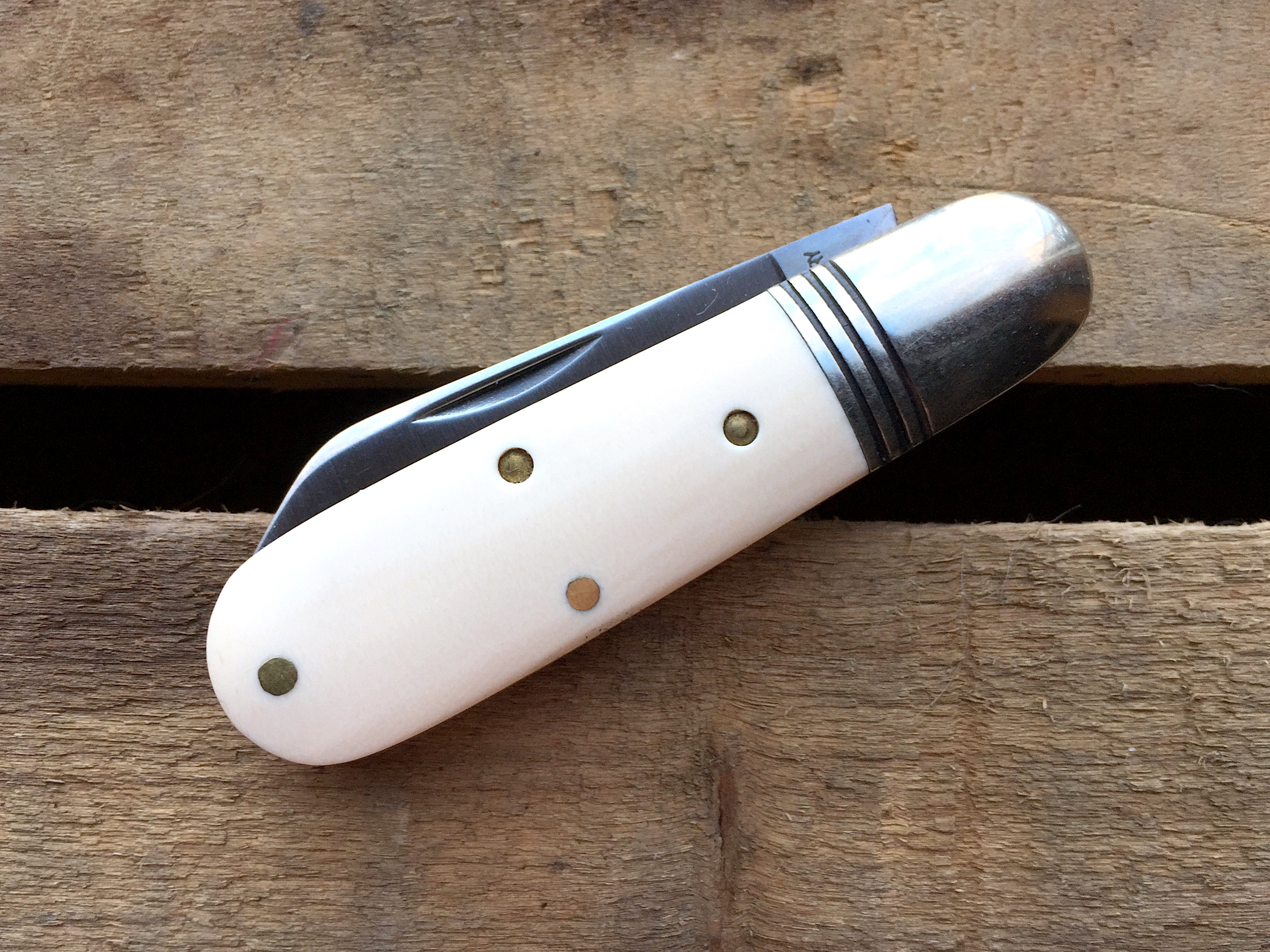 Here’s another old photo, just for fun. I think that’s yours in the middle there. 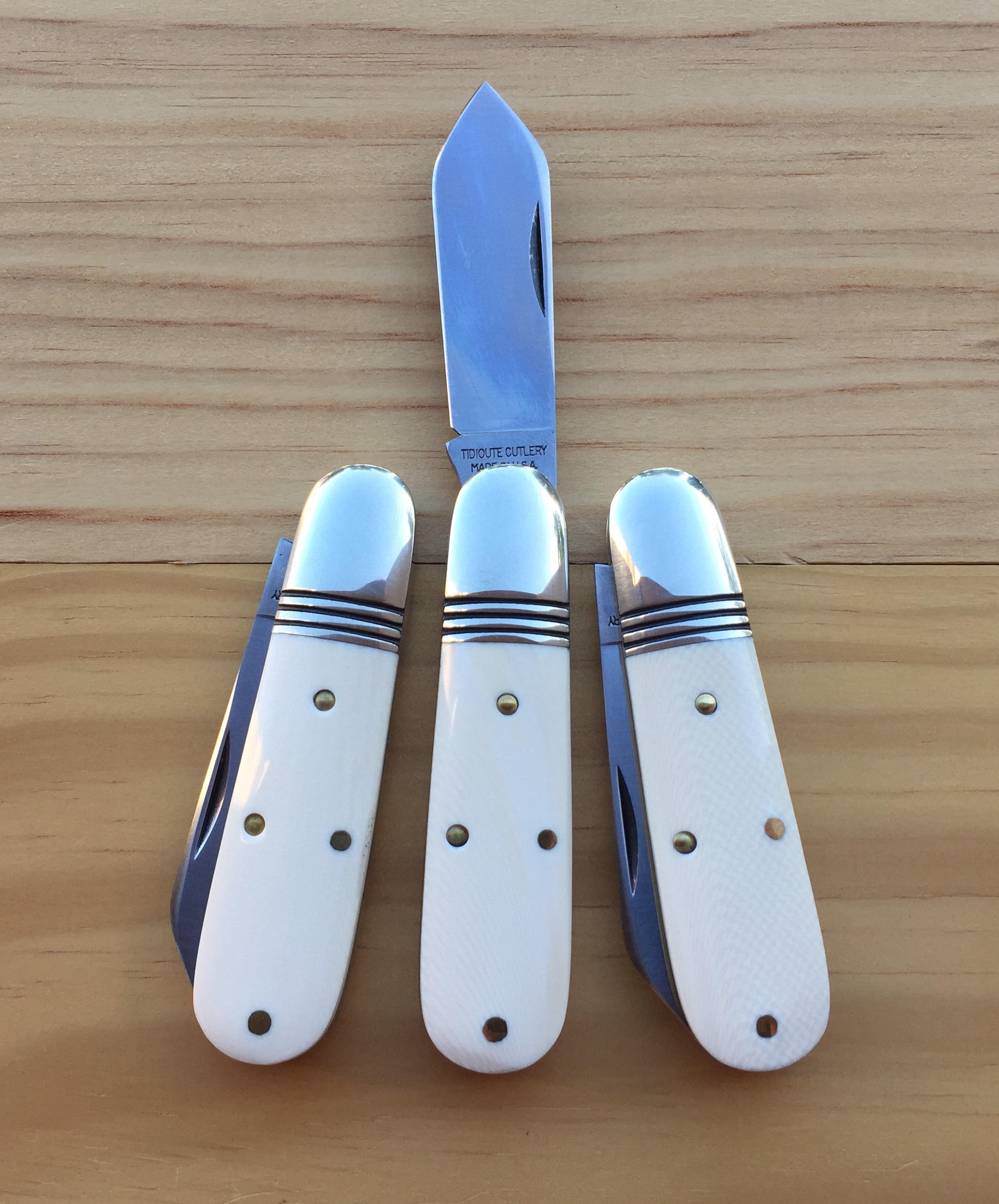 I actually agree wholeheartedly. But I do love to fidget with that Trestle Pine. And I don’t worry about it cutting me!

I ought to start a thread called “Post your saber grinds and all the stuff they are too thick behind the edge to slice effectively! (Traditionals Only)”

Helize made fixed blade and a Schatt folder today.

Will Power said:
@btb01 I hear you about the spreader knives Barrett Preferably fixed

And Brie should NOT be spread anyway but CUT in slabs......
Click to expand...

Dang now I need to step up my butter knife game. That is awesome!
K 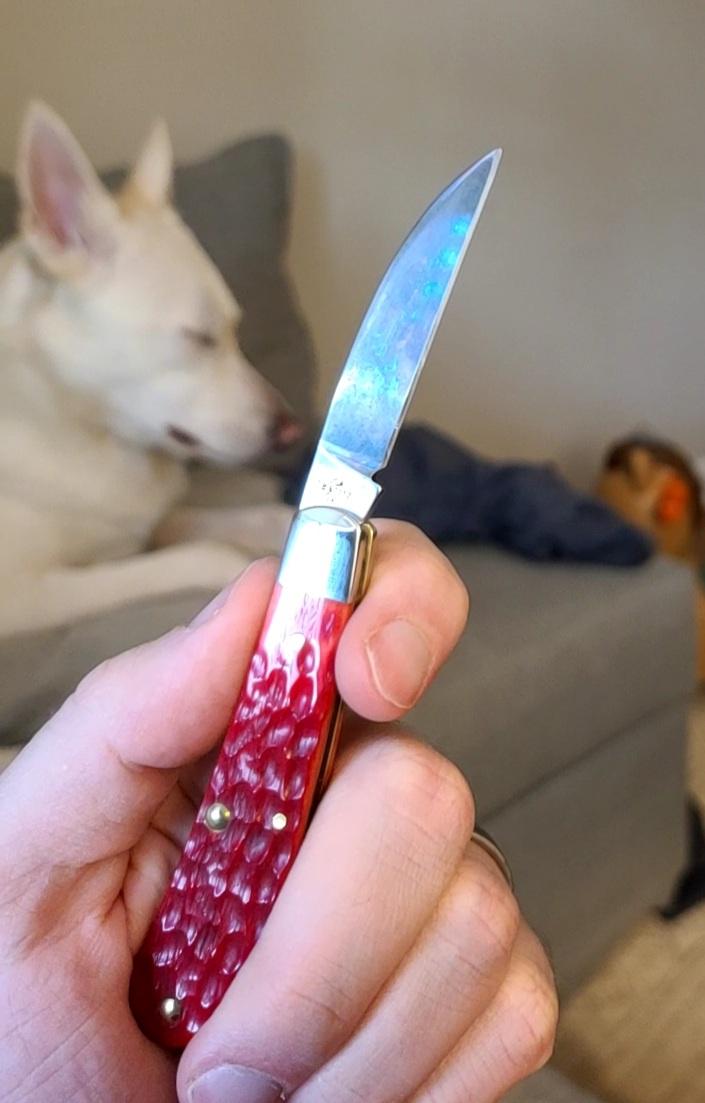 Good to see you back Tom

Many thanks JJ, two terrific knives there my friend, and a reminder my own Calf Roper is due some pocket time

Have a good day folks. Saynor Lambsfoot and a @btb01 -gifted Unicorn Ivory #25 for me today 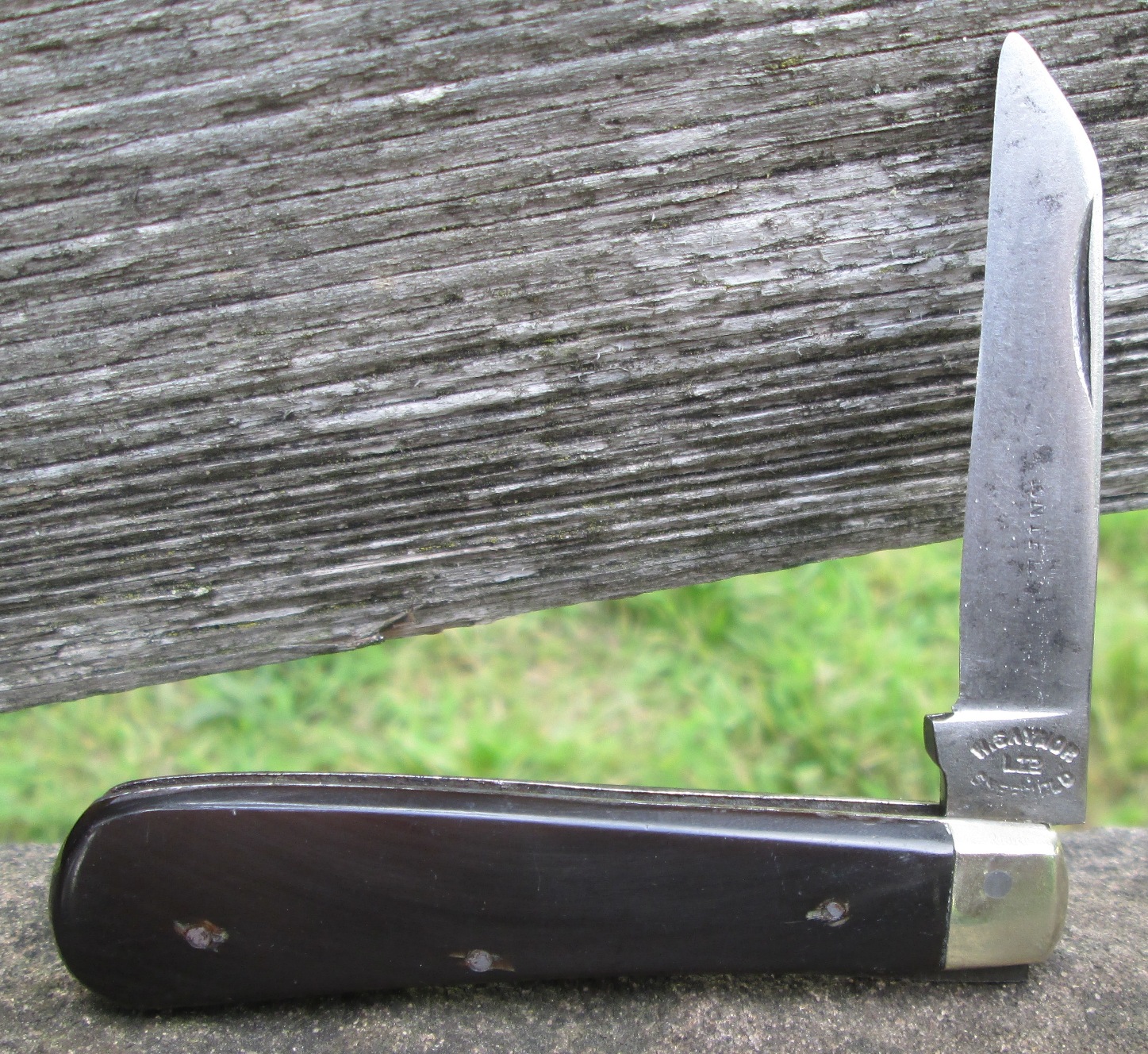 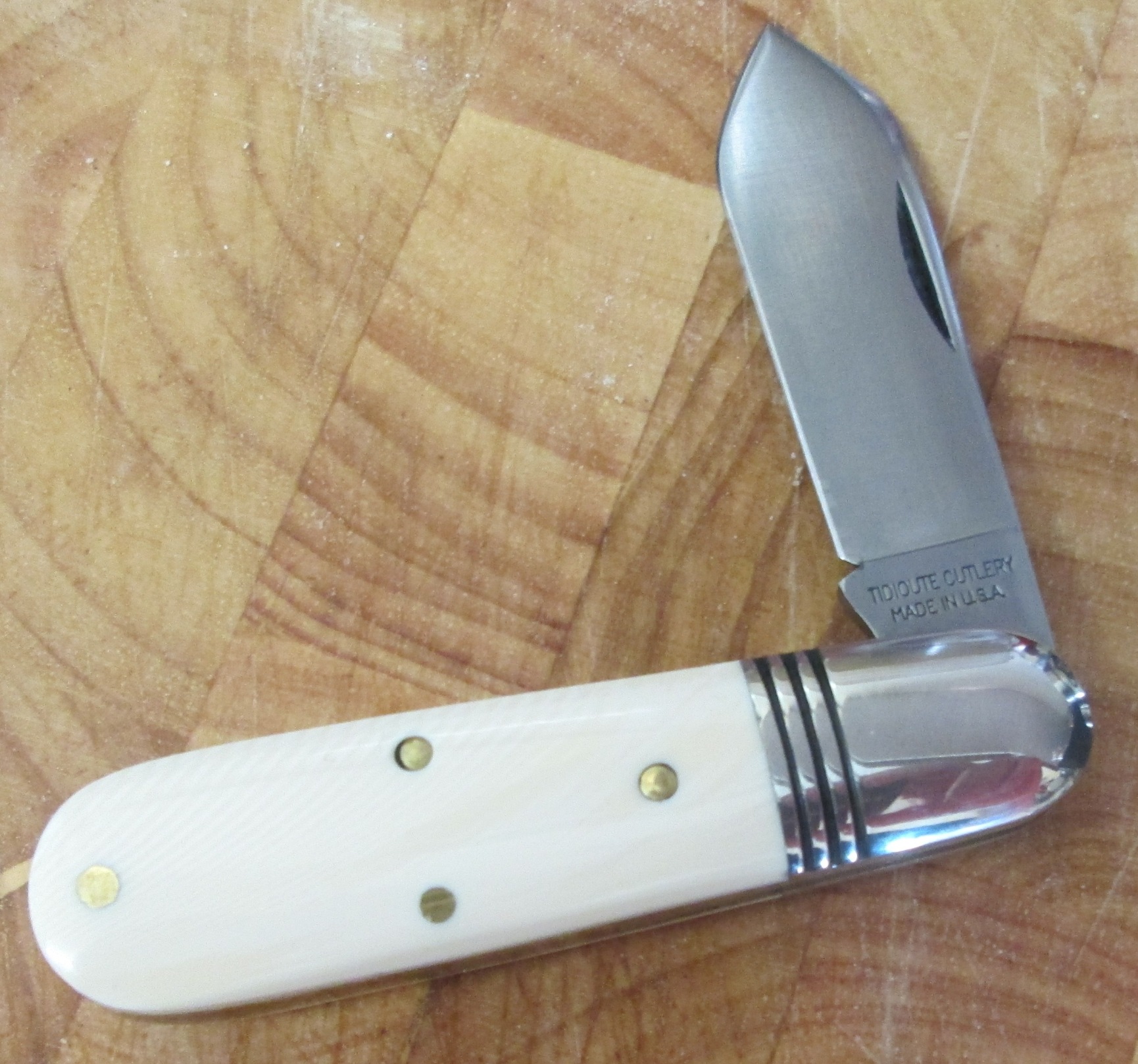 Thanks Jack, enjoy your day, your covered for a wide assortment of cutting chores

At first glance (and without zooming in) that looked like a Waynorth tang stamp on that Lambsfoot! (Not that that would make any sense, but that’s what I saw.)

Good to see your Unicorn Ivory #25. Been a while since I carried mine, so I swapped out my 2020 BF Viper I’ve been carrying for it this afternoon. (Old photo.)

Here’s another old photo, just for fun. I think that’s yours in the middle there.

Really like your Helize Greg, I love his stuff 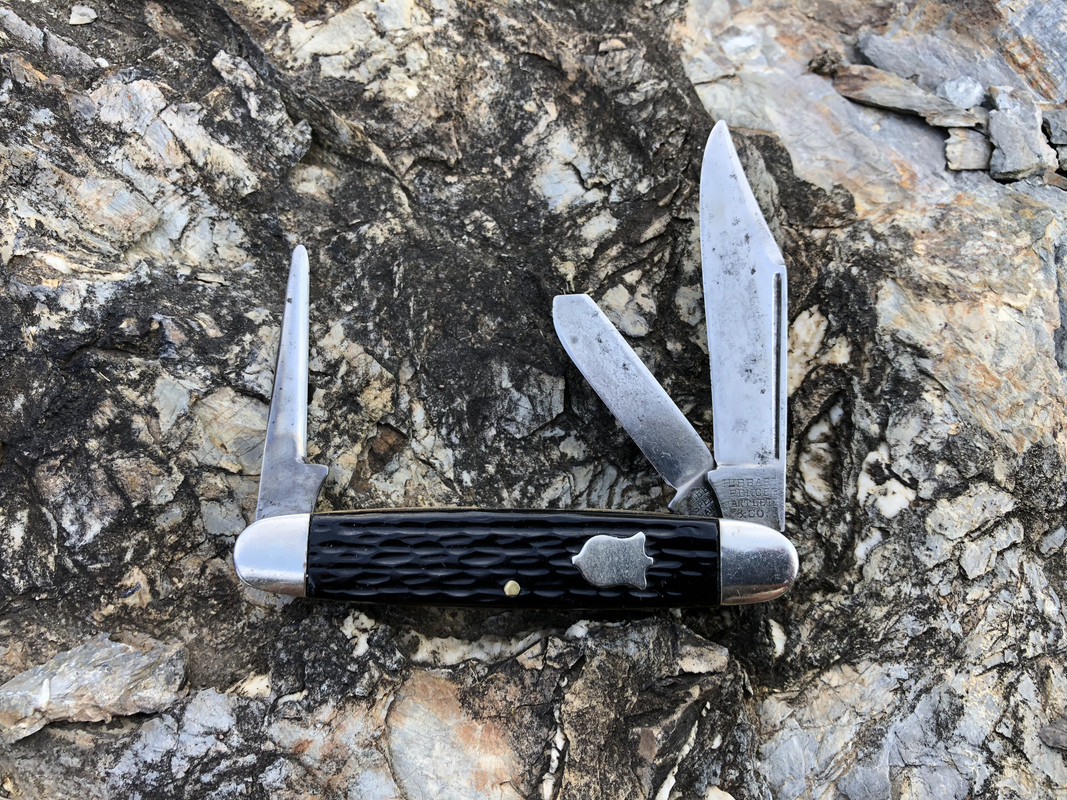 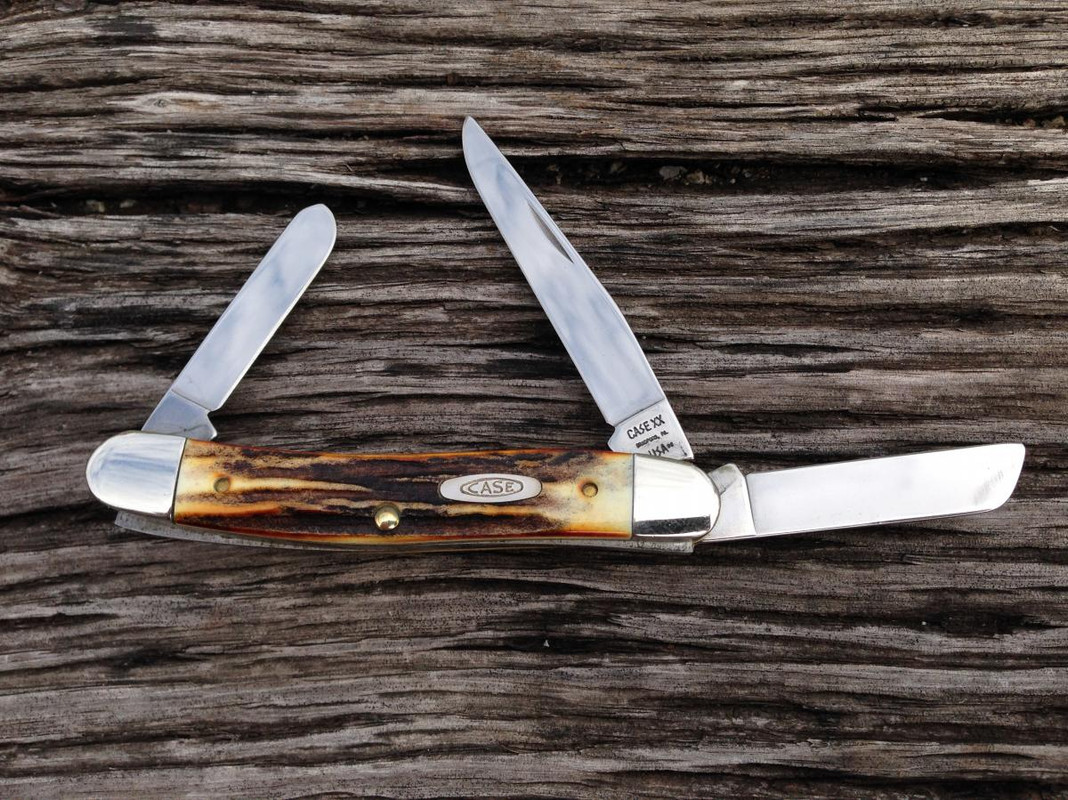 What kind of traditional knife did she get for her birthday gift, Bruce?


mcc850 said:
Happy birthday to your wife! It is also my wife's birthday today. Going to carry these two for the day. The BF 2020 knife was received in the mail yesterday from a very generous member of the porch as an anonymous GAW. I am really loving it so far! The rams horn feels really nice in hand. 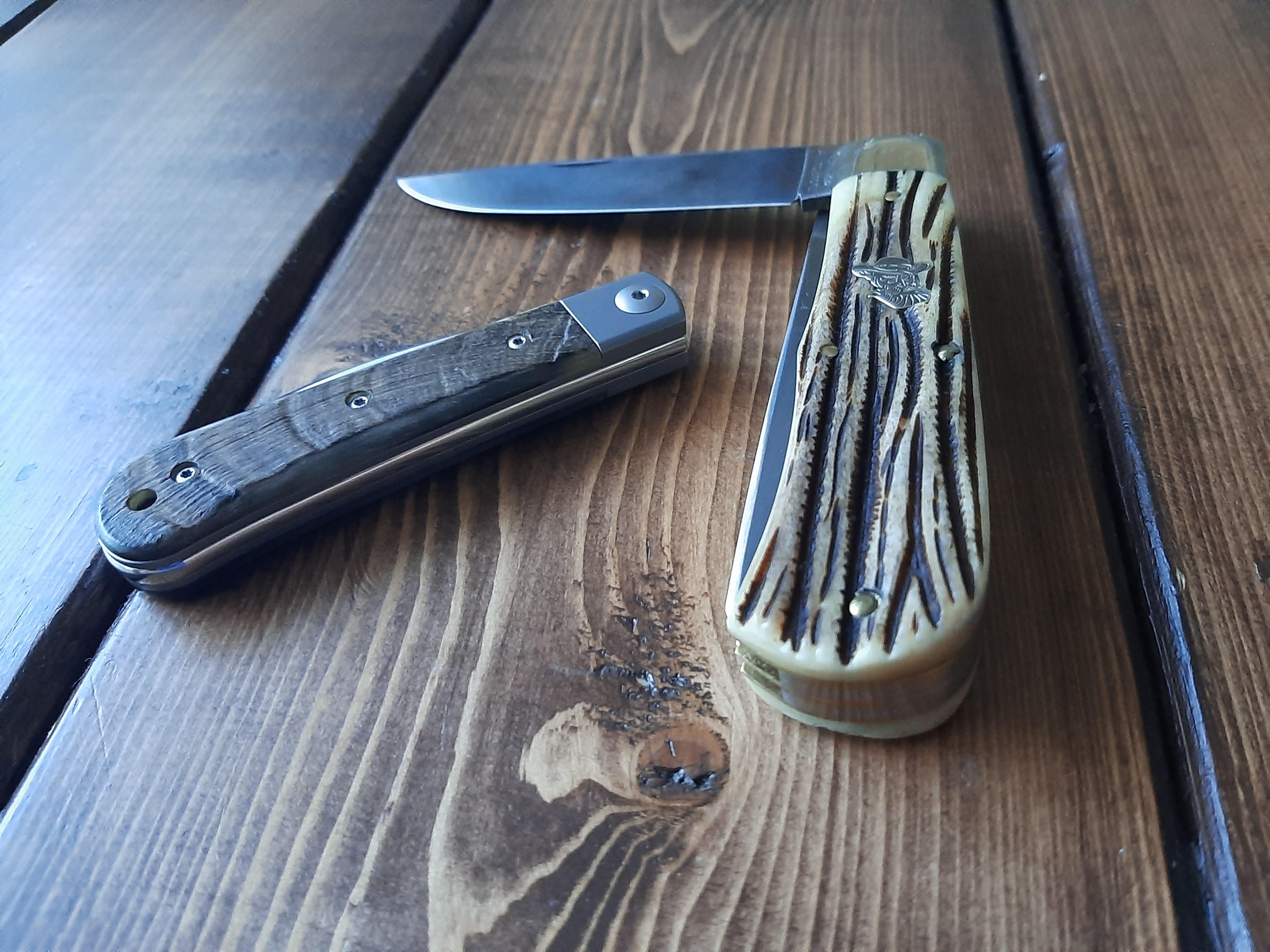 Happy birthday to your wife, too!

Amir Fleschwund said:
What kind of traditional knife did she get for her birthday gift, Bruce?
Click to expand...

She got what she wanted but she didn’t ask for a knife. She has a small collection of pen knives - she collects knives by seeing one on my desk that appeals to her and by saying ‘I like that’ - it becomes hers! OH
Ps nice Case Whittler - a favorite pattern.

a great day to all.

Un-Chained said:
Gary, your eyes are better than mine!
My black box Winchester is indeed a 15 2857 as the tang is stamped like yours, and not a 15 2851.
Must have been a mix up somewhere down the line. I do have the proper box liner, yet incorrect box top it seems. Good catch!
Click to expand...

Thanks for the info, Gus. Knife storage is hard! I think I have all of the boxes that came with my knives, but I don't even try to keep each knife with its own box. The knives are in several Plano boxes in a cupboard in the dining room, and the boxes are in a big box in the basement.


Onebigbill said:
Thanks GT. That one was gifted to me by @Modoc ED .
Click to expand...

ED is a generous guy!

Jack Black said:
It certainly would! I had two in my trouser pockets, and one on my belt Thank you my friend Thanks for the photo of your cane Gary, my staff is pretty much straight, but the top six inches lean slightly. I was intending to straighten it, but don't think I'm going to bother. I've fitted an alpine ferrule, which has a rubber 'boot', and a paracord wrist-loop at the other end. I may whip a section with paracord, but I'm not sure about that yet

r8shell said:
...
That should make a very serviceable cane.
I used a walking stick last week. Nothing fancy, a little under shoulder high. I felt much more confident walking on the snow and icy sidewalks with it. 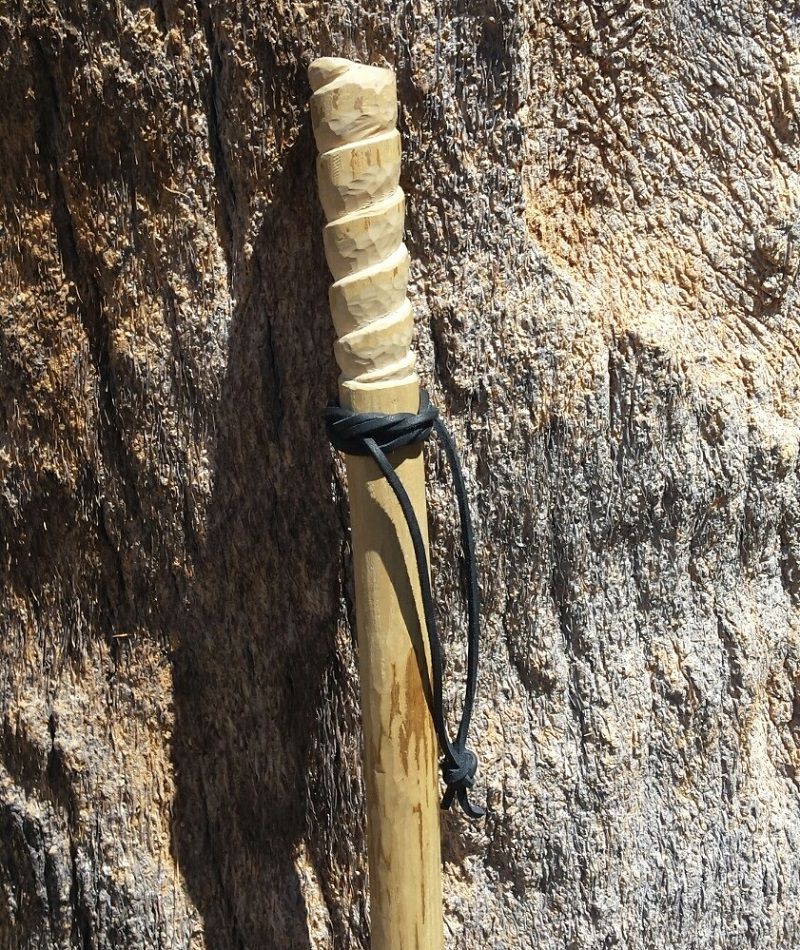 Thanks for the staff info, Jack & Rachel; sounds like you know what you're doing!

I still have to learn how to actually use a cane/staff as an aid to walking. Currently, I think my stick would be primarily a burden I bear, rather than a tool I use!

...
The Albers gets the slip, the Charlie Lamb is too long for it.
Click to expand...

Thanks, John.
I probably should have noticed that the slip is too short for your ebony WCLF.


Aias said:
Funny you say that—this past Christmas, all four children received their own Fieldmaster, and I told them the story.

No matter which you have, you can’t go wrong with a SAK.
Click to expand... 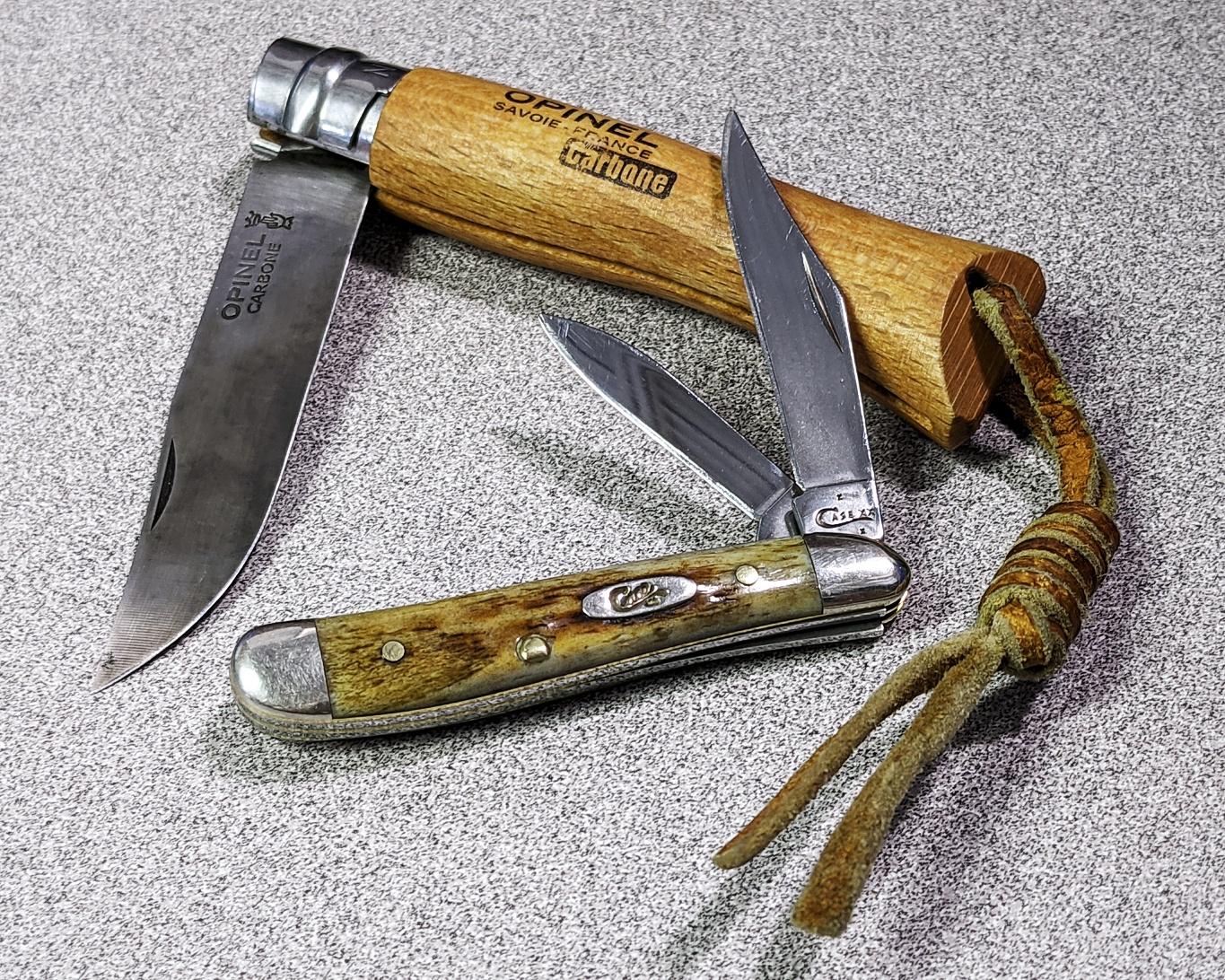 High quality photo of a couple of fine knives!

Aias said:
Im teaching today, so light duty... I picked this one up on Martha's Vineyard several years ago. 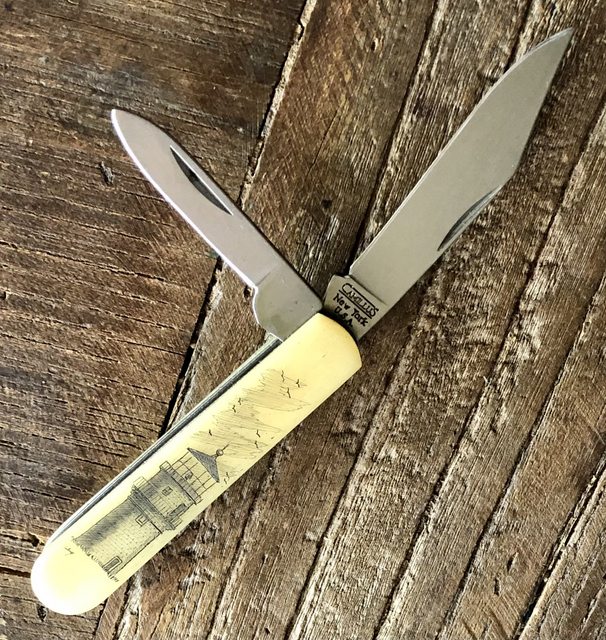 JonMcD said:
I really love the lighthouse knife! I carry a keychain knife that is it’s little brother. I’ll have to put that Camillus on my “odd knives to look for” list! 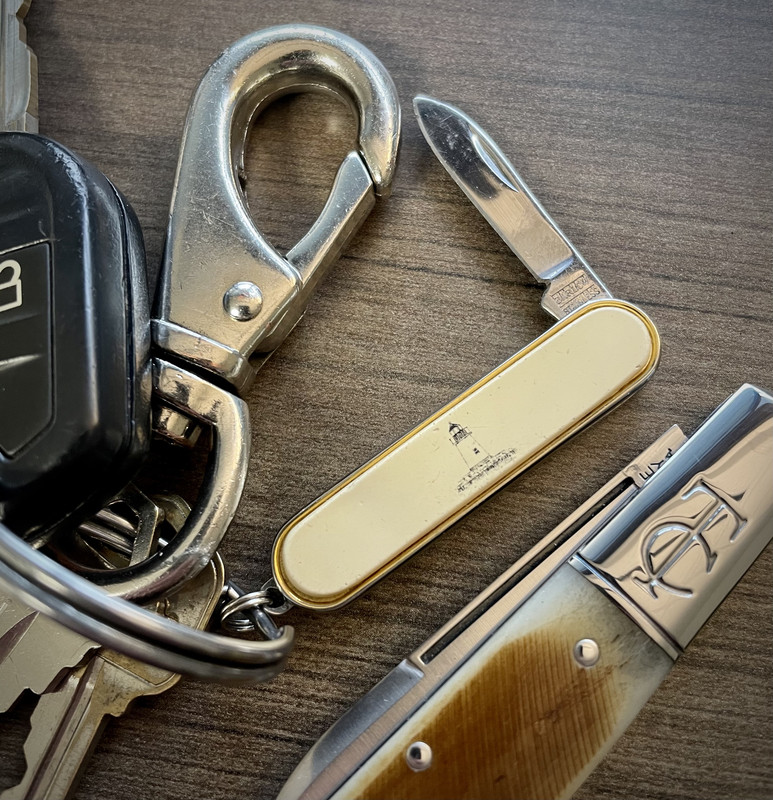 Those are cool knives with the lighthouse images!

Amir Fleschwund said:
Wow! That 85 is nice! Except for having a coping instead of a pen, it’s identical to my Grandpa’s old Camillus and the duplicate I found to carry. Super comfy in my hand.
Click to expand...

Thanks, Jeff; it's a pattern I really enjoy. It originally had a pen secondary, but Paul Hilborn modified it to a coping blade, and added the EO notch. 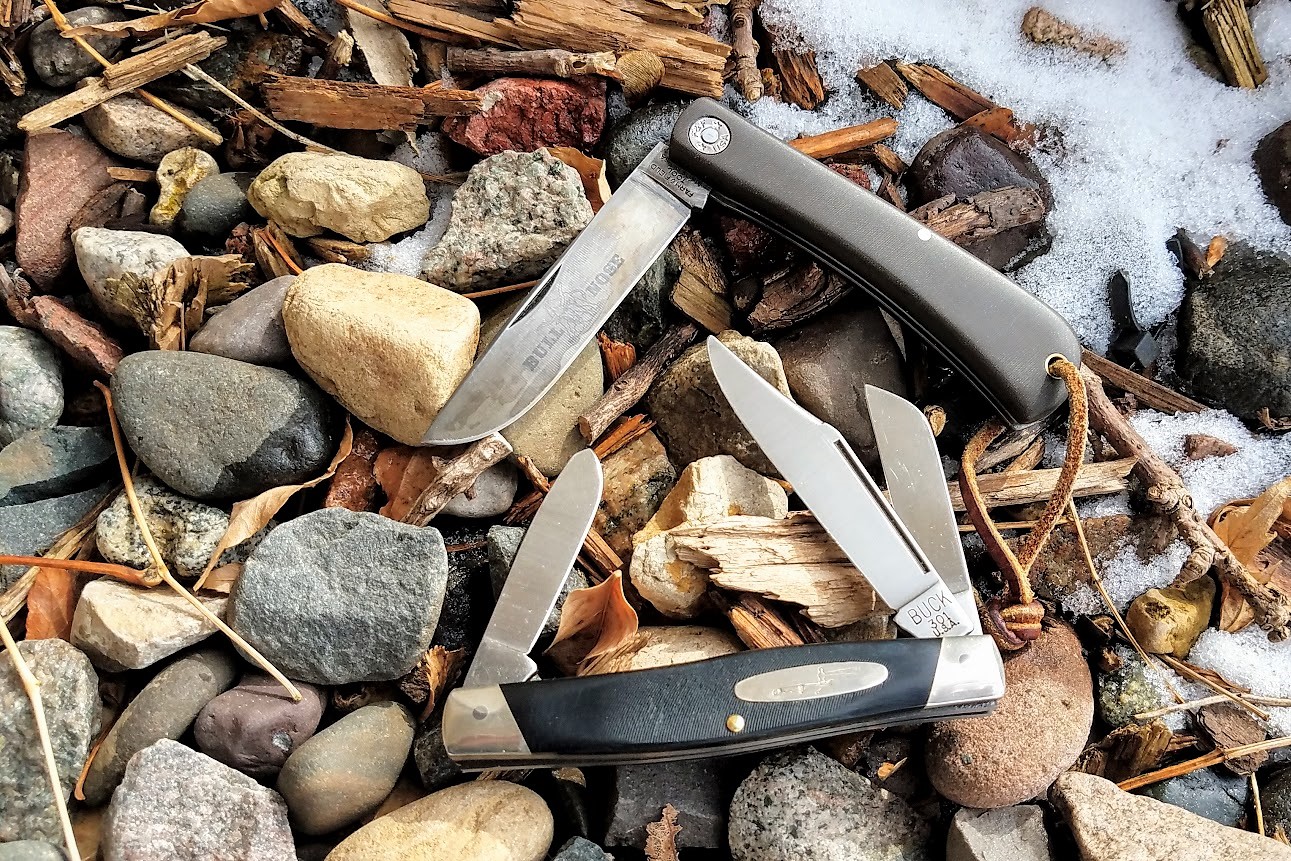 Dependability on the rocks, Steve!

Thanks, JJ; certainly agree about the bone. 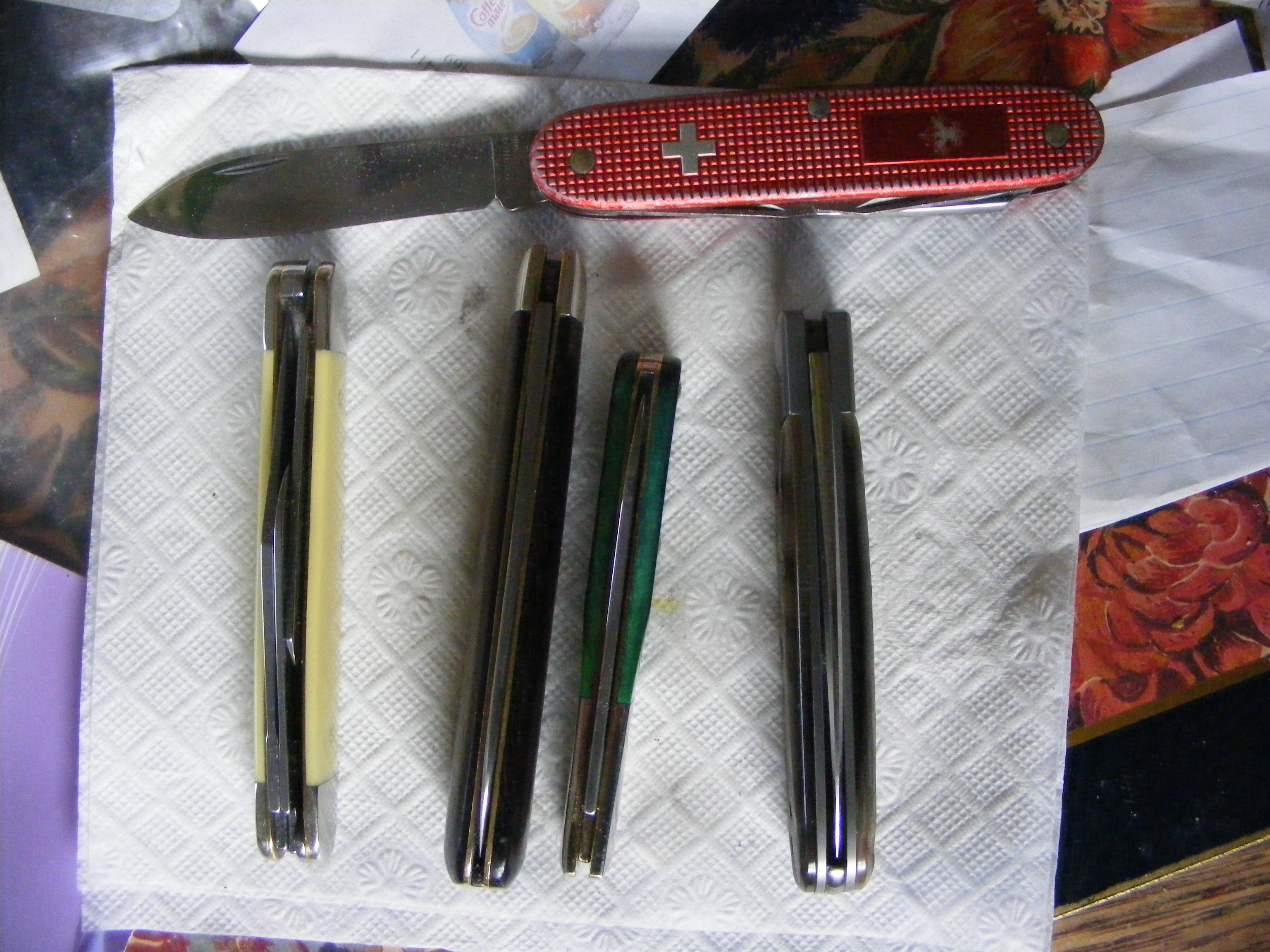 Keeping that old Vic OUT of my pocket would be a real challenge! 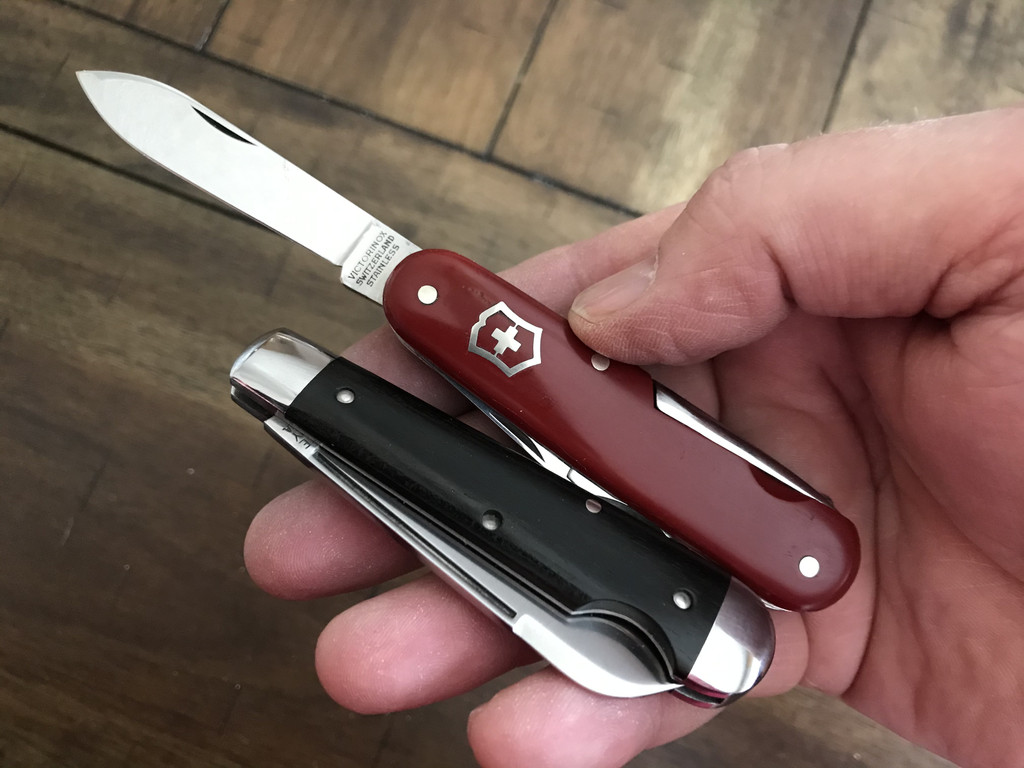 I should put learning something about dating SAKs on my list of projects.

OldHercDude said:
...
Broken record at this point, Boker Barlow Expedition and Alox Cadet again in the pockets for this week.

OldHercDude said:
...
Hard to believe mine is less than 4 months old, looks quite a bit different. Clean and almost shiny (recycled) pic when new back in November:

WW! That's quite a change in 4 months, and looks fantastic!

Hickory n steel said:
Hopefully I come to love this Buck 705 as I do the Case Texas jack here. 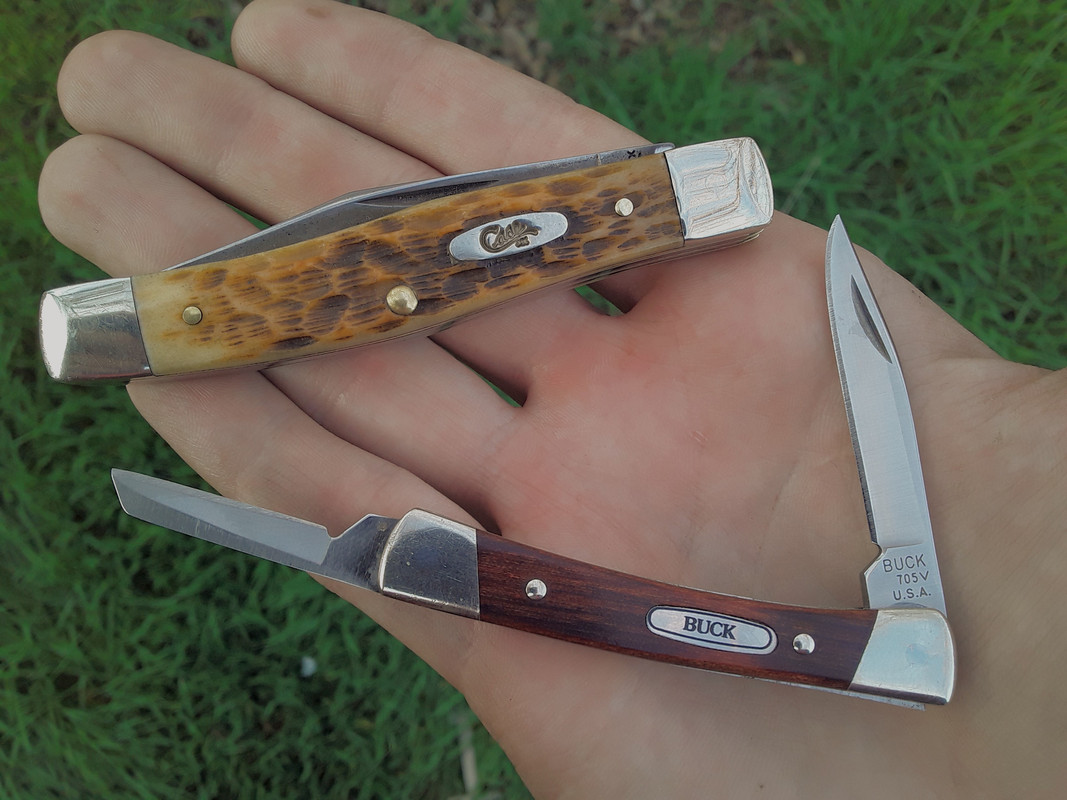 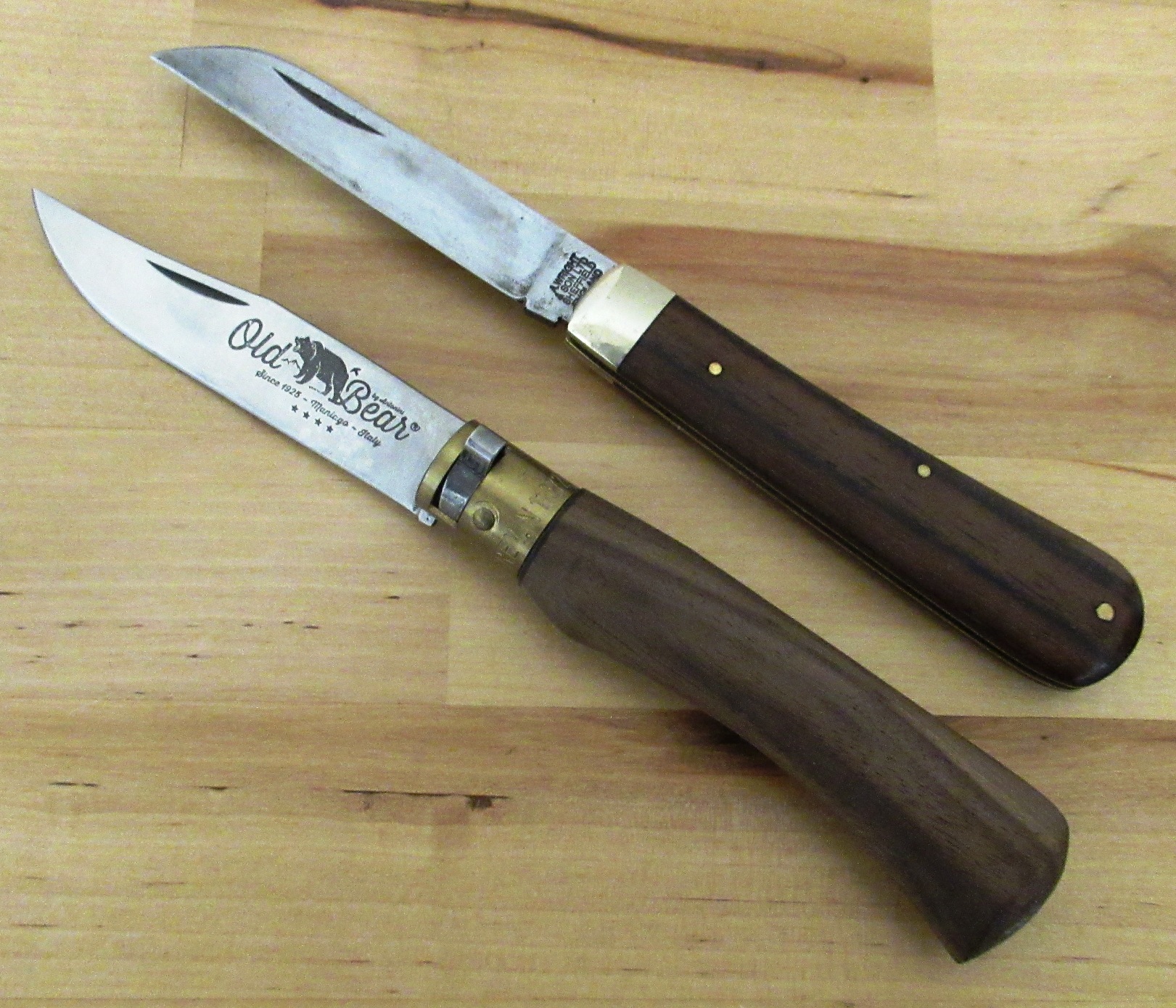 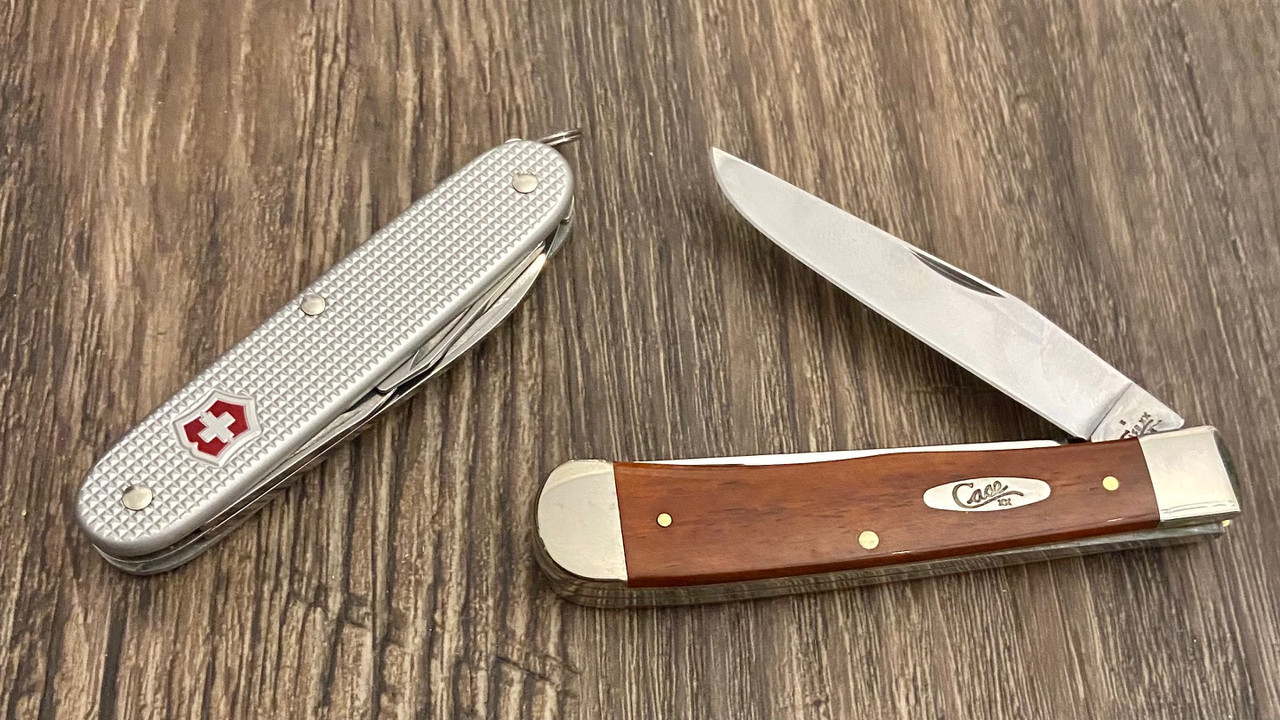 Amir Fleschwund said:
I’m going to tote this pair for a few days!
View attachment 1515178 View attachment 1515180
The 6308 Whittler is an eight dot, 1972.
The Victorinox Fisherman was a Christmas gift from my best wife many years ago, and it was carried daily~and used for much more than fishing~ for a long time. Yesterday, some of you were posting hopeful pics of fly rods, which made me jump on that idea. Maybe this will help bring it.
When I wade my local river for smallmouth, I leave everything behind except this stainless SAK. I confess that the scissors is the most used tool.
Last year, I regretted not having a camera, because I caught two 20” bass on consecutive casts at my favorite cut bank. I’m just afraid of damage, because even though there’s almost a mile of knee deep wading, there are a couple of chest deep places to get through.
The one time I cut across the fields to get there, I came home literally crawling with ticks, so wading it is!
Have a great Tuesday!
Click to expand...

I enjoyed the stories about the Vic Fisherman and about Fisherman Jeff!

But what I'm really wondering about is the ice in the first photo. Did you make an ice sculpture of the fish depicted on the knife??!??

I know you've got skilz, but that's crazy!

I carry today this GEC #15 in Antique Yellow Jigged Bone. 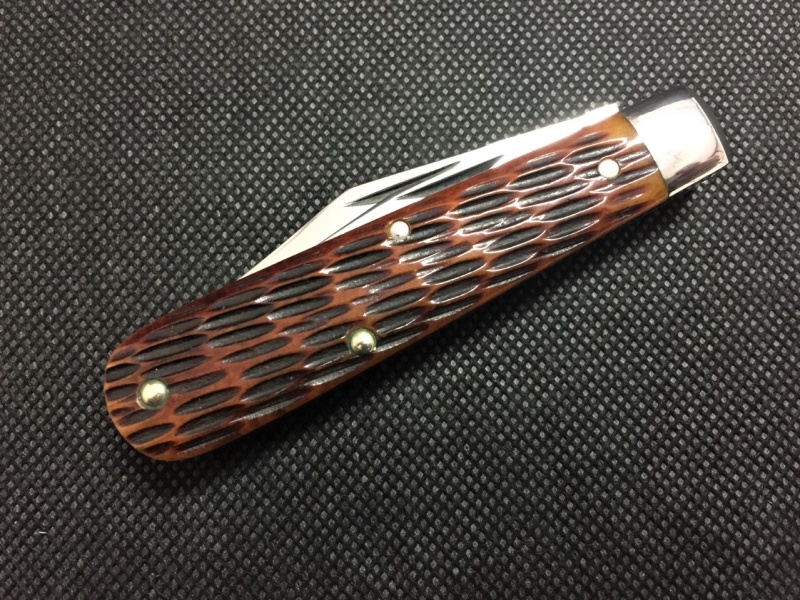 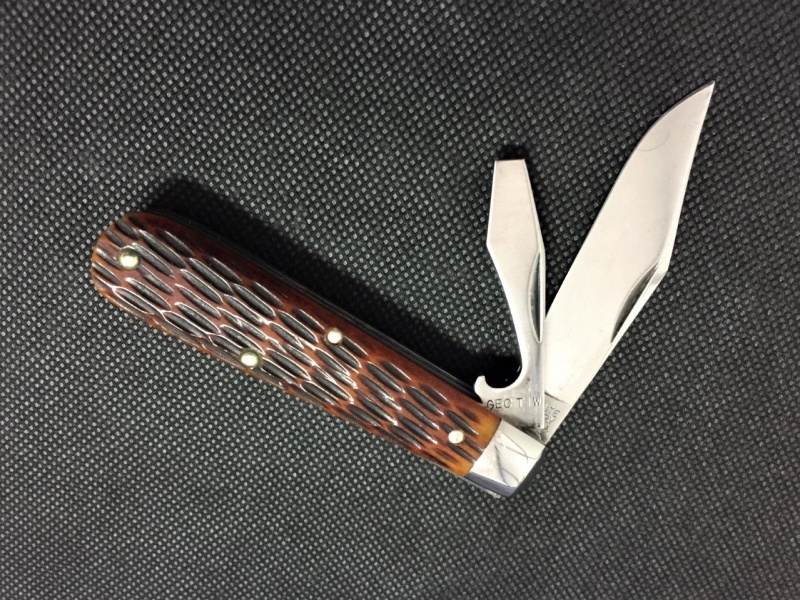